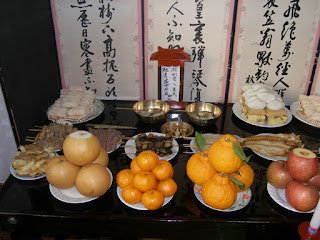 I live in the deep south of South Korea and usually spend the Korean holidays in Suncheon with my father in-law’s side of the family, but the other half of my wife’s family live up in Seoul.  I was heading for Thailand right after the holiday so it made sense to spend some time in Seoul with the family beforehand and take the relatively short trip to Incheon airport.

I live in the deep south of South Korea and usually spend the Korean holidays in Suncheon with my father in-law’s side of the family, but the other half of my wife’s family live up in Seoul.  I was heading for Thailand right after the holiday so it made sense to spend some time in Seoul with the family beforehand and take the relatively short trip to Incheon airport.

I must admit, the two major holidays in Korea are a bit of a trying time for me for the reasons I have blogged about before in my previous posts on My Korean Family, Death Anniversaries in Korea, and Is a Clash of Cultures Inevitable and Irreconcilable?  This post will involve more information and less complaining, hopefully.  Although in the spirit of this blog, I shall have a little moan.

I stayed with my grandmother in-law in her apartment and because of her age and slight frailty we did most of our celebrations there.  The first thing that hit me as I entered her apartment was the amount of people crammed in.  It is not a big apartment but it somehow managed to fit about 20 family members.  I am used to about 6 maximum in a relatively large house and garden when I spend time with family back home in England so right from the word go it was already a little daunting and, of course, I tend to be the centre of attention.

One tradition of Seollal is doing a full bow to your elders to show respect and in return they often give some money.  This being my first Seollal with the family – I have missed it for various reasons in the last two years – I was unaware that they don’t just do this with kids but with younger adults too, like myself.  The welcome surprise of about £40 between my three uncles in-law was the result, maybe it wasn’t going to be all bad.

However, fairly immediately the unorthodoxy of my wife and I’s relationship was coming into question.  Not only am I a foreigner – a bit of a shock for the family as it is – we don’t plan on staying in Korea to live, we also don’t plan on having a baby for at least another 3 years, and considering we have been married for nearly three years already this is more than a little strange to them.  Babies usually follow marriage in quite a short period of time in Korean culture.  In fact, I was encouraged (in a joking but strongly suggestive manner) by a couple of my uncles to get on with it in Thailand and get the job done and settle down in Korea.  I laughed, smiled politely and then told them to mind their own god dam business (the last part was inside my head).

I have heard that in most families in Korea there is always that one uncle that people just really can’t stand and mine is my uncle on my mother in-law’s side.  He is the eldest and he perceives this as giving him the entitlement to tell everybody what they should be doing with their lives.  He is a conservative-minded Korean and so everyone else should be in his eyes.  I also find him rather materialistic and arrogant.  My other two uncles in-law on this side of the family are just fine.  One seems to have a lot more going on upstairs, appears to understand me quite well and holds fast on the advice giving, and the other is kind, sincere, and generous, despite not being as wealthy as the other two.

Everyone left and I was pretty shattered as I also had to be up early to take the bus to Seoul in the first place, which took about 4 hours.  My wife and my mother in-law were busy though, tidying up for grandmother, who obviously could not be expected to do it all.  They also cleaned the whole apartment from top to bottom as it needed a thorough clean.  They were both angry at how none of the family that lived in Seoul helped my grandmother in-law clean up, but couldn’t say anything to their face, especially as the oldest uncle (the one I dislike) paid for the apartment and any criticism of himself or his wife might well end up in them caring less or being less generous.  So while they were around my mother in-law just had to suck-up her frustrations and be ultra-nice to them because they held all the cards.  I tried to help but was ordered not to and anyway my wife knows that dirt and dust tend to follow me around wherever I go anyway, even when my intention is to clean-up. 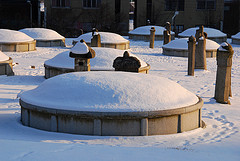 The next morning, we had to go to my grandfather in-law’s grave-site to give our respects, which usually involves an offering of food and soju and some bowing.  His grave was part of an extraordinary cemetery on the outskirts of Seoul with thousands of people buried on the mountainside.  I desperately wanted to take a picture of the place, which was coated in snow, as it looked quite beautiful and was extraordinarily large but refrained for fear of being disrespectful, something that is very easy to do in that kind of situation.

Then it was time to take a trip to my eldest uncle’s local temple, which he frequents on a regular basis and so is friendly with the monks.  My mother in-laws side of the family are Buddhist and I think even my wife might call herself culturally Buddhist, much like people back home in England are culturally Christian but don’t believe in any of the nonsense and don’t really believe in god.  They all got the cushions out in the temple and did their deep bows to their knees to Buddha as I just watched.  We all then went back to a kind of portacabin with lots of computers and a warm fire where a monk sat and made us all coffee between boxes of artistic Buddhist calendars that they were selling, which left me thinking I needed to do a little bit more study about what it meant to be a Buddhist.  I was also confounded by my rather brand name, money, and materially obsessed eldest uncle’s devotion to Buddhism and his local temple.  The monk then proceeded to give me and my wife some advice, so I smiled and nodded politely and then told him to mind his own business (last part… you get the idea). 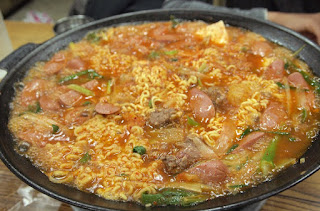 Fortunately for me, we were quite close to a place called Uijeongbu, which is famous for having a large base for American soldiers but more importantly is the home of the best Budae Jiggae in Korea, one of my favourite dishes, so we headed to a restaurant for lunch.  Budae Jiggae is a spicy soup with noodles, some processed meat like spam and little frankfurters, and a few other things thrown into the mix as well.  It is no coincidence that Uijeongbu is famous for this and American soldiers.  The dish is a fusion of traditional Korean flavoured spicy soup with the kinds of ingredients available to them during and after the Korean War, brought by American soldiers, i.e. processed meat like spam and baked beans.  Needless to say, I lapped it all up like a dog that hadn’t eaten for a week, much to the delight and amazement of most of the Koreans around me – it never ceases to amaze them that a foreigner likes their food and has the ability to eat it in the first place on account of how spicy it is.

It was time to go back to grandma’s place and relax before I flew to Thailand in the morning.  On the way we had a conversation about how rainy it is in England, the smog in London, and a few other stereotypical things about England, which prepared the way for a more serious and stern advice giving session from my eldest uncle when we got home, reiterating the need to settle-down and have a baby quickly, stay in Korea and help the family.  After a little more smiling, nodding, and the rest, Seollal was over and I could look forward to a relaxing vacation (which he made clear he did not approve of, but who cares) as my reward for all my patience and restraint.  Although amid all the irritations it was a fascinating couple of days of pure Korean culture, a privilege and a learning experience for this stubborn Englishman.