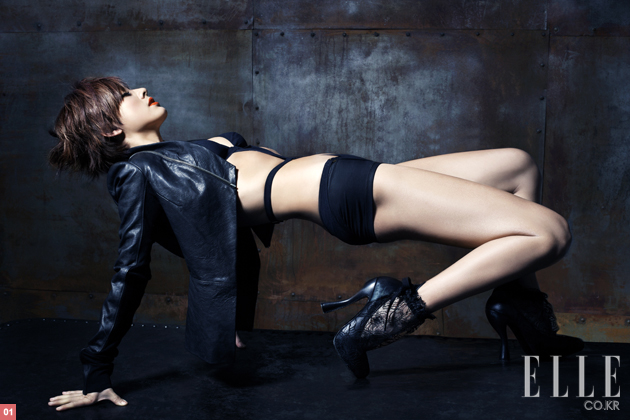 Probably both a driving force and reflection of the increasing amount of male objectification in the Korean media since last year, then you may have noticed that female authors and commenters on K-pop blogs have become increasingly vocal in their admiration of male celebrities’ bodies these days. And with the provisos that such objectification can be problematic, and more of one sex by no means nullifying the negative effects of that of another, then all power to them, but it does increasingly tempt me to indulge myself a little too!

Hence I was considering presenting some pictures for Lee Hyori’s (이효리) recent photoshoot for Elle Korea here earlier today, but paused when I thought about how to describe her in them: after all, heaven forbid that a male blogger shift from simply using banalities like “she is sexy” when expressing admiration for a woman’s body, to discussing her body parts in the same manner that female bloggers now can and do of a man’s. Or is that just me?

Either way, the sky didn’t fall in the last time I posted a picture of a woman simply because I liked it, and so ultimately I probably would have done so this time too. Well before getting to that stage however, I happened to quickly click between the picture from Elle Korea itself above and that from MSN Korea below, and something much more interesting literally jumped out at me:

In case you’ve missed it, this GIF I’ve created shows how that switch looked:

Yes, not only did MSN Korea feel the need to enlarge her breasts, apparently they also thought that she was too fat too. Anybody else find the change simply more patronizing than sexy however?

Either way, it certainly makes yesterday’s video on Korean women’s perceived need for cosmetic surgery and weight reduction all the more poignant!

(For all posts in the Korean Photoshop Disasters series, see here)