With apologies to teachers of Korean children everywhere, tired of their proclivity for repeating the nonsensical foreign words found in Korean advertisements, there is actually much to be admired in KT’s recent olleh (올레) campaign.

With apologies to teachers of Korean children everywhere, tired of their proclivity for repeating the nonsensical foreign words found in Korean advertisements, there is actually much to be admired in KT’s recent olleh (올레) campaign. For under the rubric da guraerul dweejeebeora (다 그래를 뒤집어라), or “turn the things that bug you on their heads,” it has a definite self-depreciating streak, poking fun at various groups of Koreans and their habits in a way that feels curiously similar to British humor.

Coming from a society notorious for always presenting itself in the best possible light, this is very refreshing. 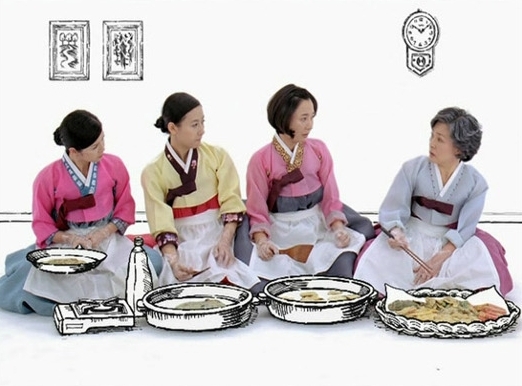 Examples on TV so far have included: elderly women being encouraged not to all have the same boring, monotonous hairstyle; men to nap on travel rugs in parks with their children playing next to them rather than always lazing around at home on weekends; Koreans not to always say the same reflexive English phrases to foreigners that they learned at school; and employees to choose their own meals rather than meekly ordering whatever the boss is having.

And there are many more like it. But all pale in comparison to the directness of the latest in the series, which targets the disproportionate burden placed women during “holidays” like Seollal (설날), coming up this weekend:

Incidentally, it shows another interesting aspect of Korean society: their lack of embarrassment (some would say alacrity) in showing bodily functions. Already having rather too much of that sort of thing at home with 2 young daughters to look after though, then I’ll wisely refrain from further commentary on that here.

Instead, I’ll look forward to possibly seeing another that covers a second reason many women hate Seollal: if they’re in their late-20s or older, being pestered by their relatives to find a partner and get married, and indeed I have a 29 year-old friend and a 32 year-old sister-in-law that will be staying well away from home because of precisely that. A phenomenon hardly confined to Korea of course, as is women doing more domestic work than men, but then I’d wager that many foreign women at similar ages reading this can attest to the sheer amazement Koreans experience when they learn that they’re not married!

On that note, apologies if all this sounds familiar to many readers. But while the Korean media will be full of similar commentary this week, this is the first time I’ve seen something like it in a Korean advertisement, and as part of a particularly popular series at that. And as they say, a picture tells a thousand words…

Or perhaps there have been earlier ones that I missed, or alternatively others by different companies playing at the moment? Please let me know!

(For all posts in the Korean Sociological Image series, see here)