Now, I love seeing temples. But I feel the same way about Korean temples as I do Renaissance art–there are only so many you can see before you start getting a little bored of the same styles and subjects repeated over and over again. I can already hear the protesting rants but before anyone gets up in arms: I like Renaissance art and I like Korean temples but sometimes I want to see something dramatically different.

Now, I love seeing temples. But I feel the same way about Korean temples as I do Renaissance art–there are only so many you can see before you start getting a little bored of the same styles and subjects repeated over and over again. I can already hear the protesting rants but before anyone gets up in arms: I like Renaissance art and I like Korean temples but sometimes I want to see something dramatically different.

There is a tiny temple in between Yangsan and Tongdo Temple called Naewansa.  I wasn’t interested in seeing the temple…I just wanted to play on the rocks along the river like most people my age seemed to be doing in the area (Koreans too, not just foreigners).  So that’s what I did. I played along the rocks and then sat, sunned myself, and read this month’s book club book (Snow Country by Kawabata).  Of course, I managed to fall through a patch of land that wasn’t as solid as it looked and jar my left ankle nicely. It’s a little tender but doesn’t feel like I re-sprained it and it’s not swollen. Cross your fingers people.

Picture diary of my day: 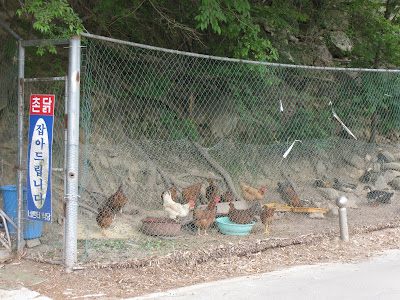 Reasons to be glad you aren’t a chicken: you don’t live in a cage! Though I will admit, this cage is far bigger than the factory cages in the U.S. There was also a duck in there. I’m not sure if he flew in to hang out for awhile and get some free grub or if his wings were clipped. 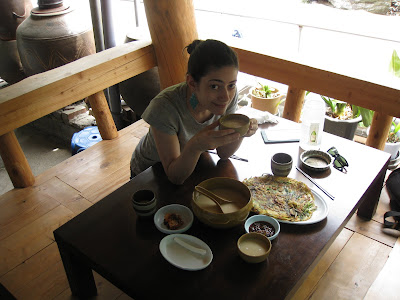 This is me trying dongdongju for the first time. I know that it’s weird that I’ve been in Korea for almost a year and a half but I honestly don’t drink that often.  It was okay, kind of a like a thicker version of makoli without the carbonation.  The big pancake like thing in the middle of the table is pajeong, an omlette/pancake type thing made from eggs, onions, scallions, peppers and often baby octopus or squid tentacles. Yummy. I had been avoiding it since the last time I had it I was quite ill from what I suspect was milk or butter.  However, my co-workers insisted that pajeong is NEVER made with milk or butter so something else must have made me sick. I was dubious but willing to give it another shot. Absolutely terrible decision on my part–I’ve been sick since late afternoon.  Oh well, it was mighty tasty. Play time for Alex! Sticking your feet in to cool off feels fantastic. I wish I’d worn shorts so I could wade better but it was a little chilly when I set out and I’d rather be too hot than cold any day. 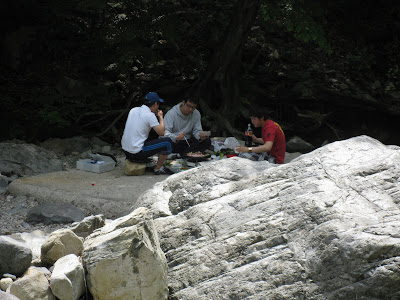 Next time I shall do what these gentlemen did and bring my own food. 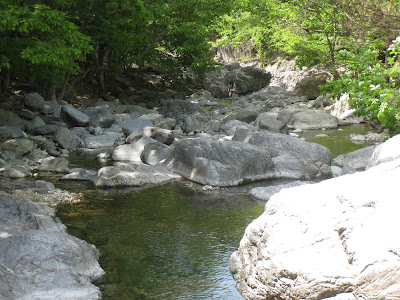 Though most likely, I will wander like this girl (squint!) alone and contemplate such important topics as how to pay for grad school without selling my soul or organs and how pretty the mountains are. Obviously the second topic is the preferred modus operendi. And it’s not hard to focus on. 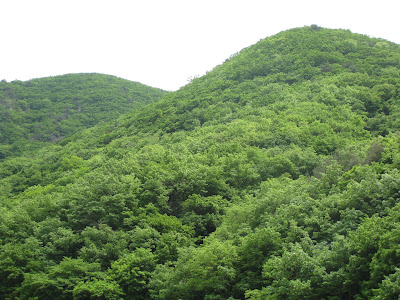 Wrapped up as I am in school and city life it’s easy to forget how beautiful the country side of Korea can be.

Spaz update: (Aside from the ankle twisting)

Hot pepper Sun Chips were on sale today at E-mart. From the sign I was able to understand that if you bought 4 the 5th was free. What I missed  was that I was supposed to put the items in this little plastic bag that had a barcode on it. I had elected to skip the bag thinking I’d save on some plastic since they were all going in my canvas shopping tote. At the register the young clerk couldn’t ring it up because there wasn’t a sale barcode. I tried to explain that it was the sale item and I think he understood me (I could have been saying something else of course with my typical ability to butcher the pronunciation into something indecent) so he called over another sales clerk to ask how much they were but the other guy was as baffled as he was.  So they called over a THIRD person (managerial looking) who looked at me and kind of gave me the ‘seriously’ look and then told the boys to go get a bar code bag. They told me to wait a moment (in Korean) and I apologized and turned bright red.  Turning bright red might not seem like a big deal but I only blush about once or twice a year. I think the fact that I’m just such a spaz on a daily basis makes  it take a lot more to embarrass me to the point of actuallyblushing. Being lost or confused in the grocery store isn’t something new for me in Korea but I think that understanding that the clerks thought I was a total fool pushed my embarrassment index over the edge.

2 minutes later at the pharmacy I was so flustered that I forgot the Korean word for ‘peach’ and had to try to point to the box of vitamins I wanted. At least the pharmacist was nice about it.

Mostly Koreans are very nice to me. For instance, when debating with my friend about which stop to get off at the man behind us on the bus told us he was getting off at Naewansa and would show us where to go. Koreans are generally awesome, sometimes I just fail.