A 22-year-old Korean girl was found unconscious near Itaewon station late Saturday evening. According to official police reports, she had a confrontation with a number of foreigners, although no Korean could explain the problem to them.

The following picture was found on the woman’s camera: 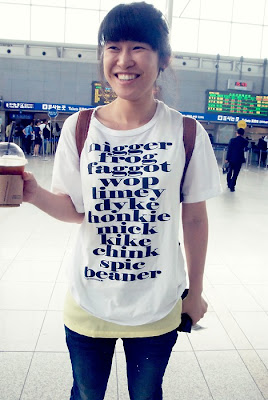 A 22-year-old Korean girl was found unconscious near Itaewon station late Saturday evening. According to official police reports, she had a confrontation with a number of foreigners, although no Korean could explain the problem to them.

The following picture was found on the woman’s camera:

Although no pictures were taken of her attackers, about 30 other pictures on the camera showed various angles of her face, hair, and coffee.

This reporter worked through his contacts, and found a couple of foreigners who witnessed the attack. The first, who requested to be identified as ‘J’, made the following statement:

So it was about 11pm, right outside of exit 2. This group of foreigners was just standing around, talking, waiting for friends, I don’t know. This girl comes up the stairs, smiles at the foreigners and continues walking on. Three of them called over to her, asking her what was on her shirt. Later on, I think I heard one of them try to speak Korean to her, but that didn’t get her attention either. Whatever. I thought the shirt was really offensive, but I wasn’t about to do anything about it. She probably doesn’t even know what they mean, so whatever.

Another witness, who did not wish to be identified by name, said he saw her attempting to enter “a couple of different clubs” in the Itaewon area around 12:30am. She was refused entry into one, but “argued her way into the other one”. Within minutes, she was seen being chased by “a black guy, an Italian, a cross-dresser, a Mexican, and a lesbian”. Although this witness did not see the actual attack, he reported “she was just screaming the words on her shirt like they were normal, silly words”.

The Korean woman was taken to a local hospital for bruises, cuts, and a possible broken arm. Although the Korean police has questioned the victim, they have closed the case citing uncertainties on what may have prompted the attack and the lack of Korean witnesses.

This is satire. No Koreans were harmed by foreigners in the making of this post, although it’s HIGHLY unwise to wear a shirt that has words you don’t understand. Especially when those words are racial insults of all varieties.

For the record, this made-up story pales in comparison to the very real Korean girl that got walloped on the subway while DOZENS of bystanders did nothing. The video has, unfortunately, been removed from Youtube, but HiExpat reported about it, as did many other K-blogs.