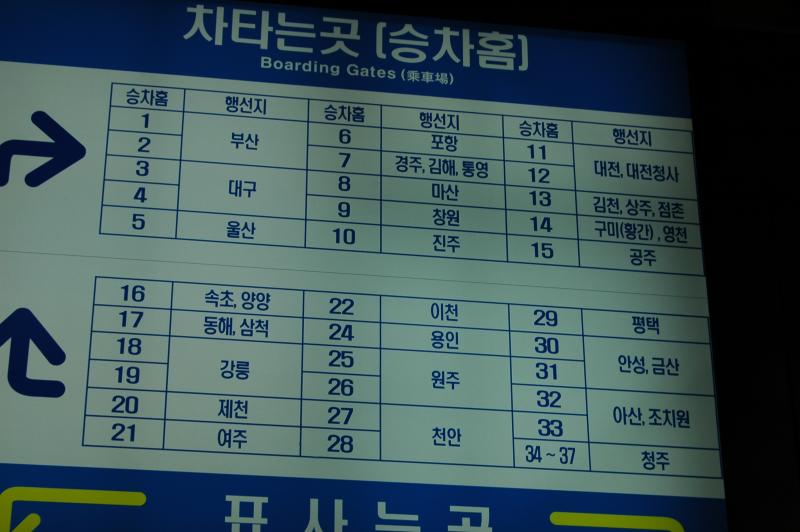 Author’s note: ‘Life in Korea’ posts are aimed at the newer expats among us. If you have a more experienced perspective to offer, please share in the comments. I’ve also recently written about traveling rural Korea by bus – a similar subject also worth reading about if getting off the typical tourists path.

Author’s note: ‘Life in Korea’ posts are aimed at the newer expats among us. If you have a more experienced perspective to offer, please share in the comments. I’ve also recently written about traveling rural Korea by bus – a similar subject also worth reading about if getting off the typical tourists path.

Traveling by express bus is one of the easiest and cheapest ways to get around Korea. The country also has an extensive system of trains that go many places, but buses can be more direct and are usually more comfortable. While there is a bit of a learning curve at first, a couple trips will make you feel more independent in your travels. Note that being able to read hangeul is highly recommended – even if you’re slow at it, it’s easier to find the place you’re looking for if you can spot it in the Korean alphabet.

For many major destinations from Seoul’s Express Bus Terminal, express buses leave frequently (leaving every half an hour or more often) – no need to plan ahead for these destinations. Show up, buy a ticket for the bus leaving next, and get on. Quite a few smaller cities have buses that leave occasionally (once every half an hour to two hours); it’s only the furthest or smallest cities that offer buses leaving rarely (a handful of buses leaving per day). To see how often your bus runs, check out this page on VisitKorea – both origin and destination are neatly sorted by province and city, whether you’re traveling from Seoul or any other part of Korea. Bear in mind that traveling from elsewhere in Korea means the bus schedules will change. Living in Busan? There will be a lot more buses that travel to nearby Ulsan than a tiny city in Gangwon-do.

Seoul’s Express Bus Terminal has two large buildings that serve three major bus lines: the Gyeongbu line and Yeongdong line are serviced out of the older building, while the Honam line is serviced out of the newer building. While you’re underground this won’t make much sense, but you get inside the terminals it will. Trust me when I say the subway station (lines 3, 7, and 9 all converge here) and connected bus terminal is a maze. It’s all interconnected, yet covers a huge amount of area. There are tons of signs while at the subway levels, yet those signs always seem hard to find when looking for them. Arrive extra early if it’s your first time.

Worth noting: don’t confuse the word ‘line’ with the train lines – the train routes and the highway routes aren’t the same. For more information than you ever wanted to know about Korea’s roads and expressways, Wikipedia is your best friend. As a rough guideline, the Gyeongbu ‘line’ heads towards Busan, while the Honam ‘line’ heads towards Mokpo in southwest South Korea and the Yeongdong ‘line’ heads east towards Gangwon-do.

Here is an alphabetical listing of dozens of destinations (from Seoul’s Express Bus Terminal) – use it to figure out which building to go to:

If you’ve never taken a bus from one point in Korea to another point, the three main steps are fairly simple:

Step two: find your platform. The opening picture of this post comes from Seoul’s Express Bus Terminal – one of the largest and most foreboding terminals around Korea. If 37 platforms don’t faze you, there’s a fair chance nothing will.

Step three: use the restroom, buy your snacks and drinks, etc.. While most bus rides over two hours will take a rest break at a fairly well-equipped rest stop, bring what you want onto the bus. The drinks and snacks, that is. It’s good form to use the same bag to haul your trash out – and saves the bus driver a bit of inevitable clean-up work. Don’t be that inconsiderate foreigner – there will be trash cans just after you disembark.

That’s it. Buses really are pretty straightforward in Korea. The biggest trick is knowing where you want to go, and how often the buses come. If you need to be at the terminal for the first bus at 7:30am, it’s good to know that the night before so you can get to bed early. If there’s a bus that leaves at, say, 11pm, and arrives in the wee hours of the morning, that might save you some time traveling on a Saturday.

Experienced expats – any final words on traveling via bus?