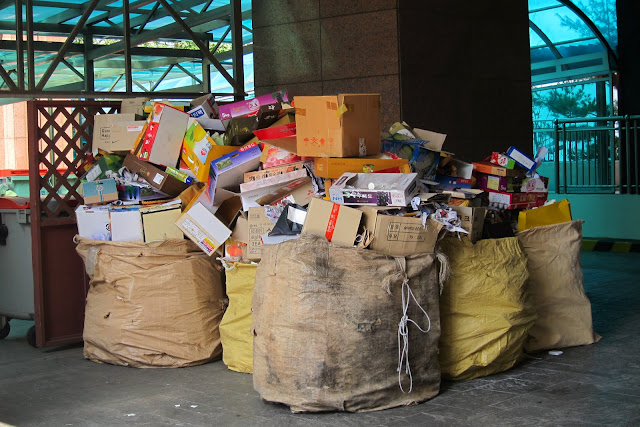 Rocketman had to fly out Sunday morning of the Chuseok holiday.  Chuseok is Korea’s version of our Thanksgiving and everyone heads out to visit their parents or grandparents so the highways are a mess.  This is the aftermath of our side of our apartment complex.

Rocketman had to fly out Sunday morning of the Chuseok holiday.  Chuseok is Korea’s version of our Thanksgiving and everyone heads out to visit their parents or grandparents so the highways are a mess.  This is the aftermath of our side of our apartment complex.
Hannah, my Korean girlfriend came over Sunday and stayed overnight.  She wanted to help me with my homework so she spent about 3 hours doing my hanji.  On Monday afternoon, I was going to meet Nan and Young Soo and make songpyeong.  Hannah and I decided to go out for lunch and one of the few places open was VIP which is like Outback Steakhouse except with a HUGE salad bar.
It’s a pretty good walk from our apartment and Hannah had on high heels of course so we tried to hail a taxi only to find out that they few and always occupied.  We made it to VIPS and I was worried that it would be crowded but we were delighted to find it relatively empty.
We were seated and given menus.  We had both decided on just the salad bar.  It’s very extensive with even pizza, chicken, shrimp and tacos just to name a few items.  We tried to get the attention of the waitstaff but they were making sure they never looked our way.  Hannah got really mad.  I told her that she was with a foreigner and to get used to it.  That is how we are treated most of the time in a restaurant.
Finally, we decided to make our way to the salad bar and start eating thinking that would catch their attention.  But no, we tried to get someone to write up our order to no avail and finally gave up.  Hannah said, “I am Korean and I speak Korean. Why won’t they even look at us?”  I looked at her and said again, “Hannah, you are with a foreigner.”  She was fuming at this point.
We went up to the salad bar multiple times and spent well over an hour without a glance from the waitstaff.  We finished and decided to leave without a bill.  You eat upstairs and pay downstairs.  We made our way to the cashier and Hannah unloaded on her.  She felt very bad and gave me a bunch of tickets for free meals.  Hannah really couldn’t believe it had happened to us since she is Korean and I was frankly surprised at that too.
We left the restaurant too full and tired to walk home but again we could not find a unoccupied taxi.  We began the walk home and got about halfway there when we saw a taxi.  We waved our hands and yelled and jumped up and down.  He stopped!!  We got in and thanked him.  He talked to Hannah and she told him everything we had been through including not finding an unoccupied taxi.  The fair total came to the minimum which is 2400 WON ( $2.00US).  I was so happy and it being a holiday, I gave him 10,000 WON.  He was soooooo happy.  Hannah reminded him as we left to pick me up if he ever saw me again waiting for a taxi.
We got home and I went to Young-Soo’s restaurant.  I made a video of how she makes songpyeon:

Mine looked terrible but they still tasted great.  It was funny to see so many Korean men nursing a hangover coming in for a bowl of noodles.  They looked terrible but all said the same thing, drank too much soju last night.  I also had a surprise guest and I’ll tell you where I went in tomorrow’s post.