“Oh God,” I wince as the card I have just drawn from a well-worn deck is turned over to reveal an ominous image that instantly reminds me of the woman from The Ring. “That can’t be good,” I note as my eyes take in the oriental ink sketching that surely, in my mind, is indicative of looming death. The man across the table freezes and his eyes meet mine for the briefest of moments. His weathered skin and honest, understanding glance indicate that he’s the real deal. 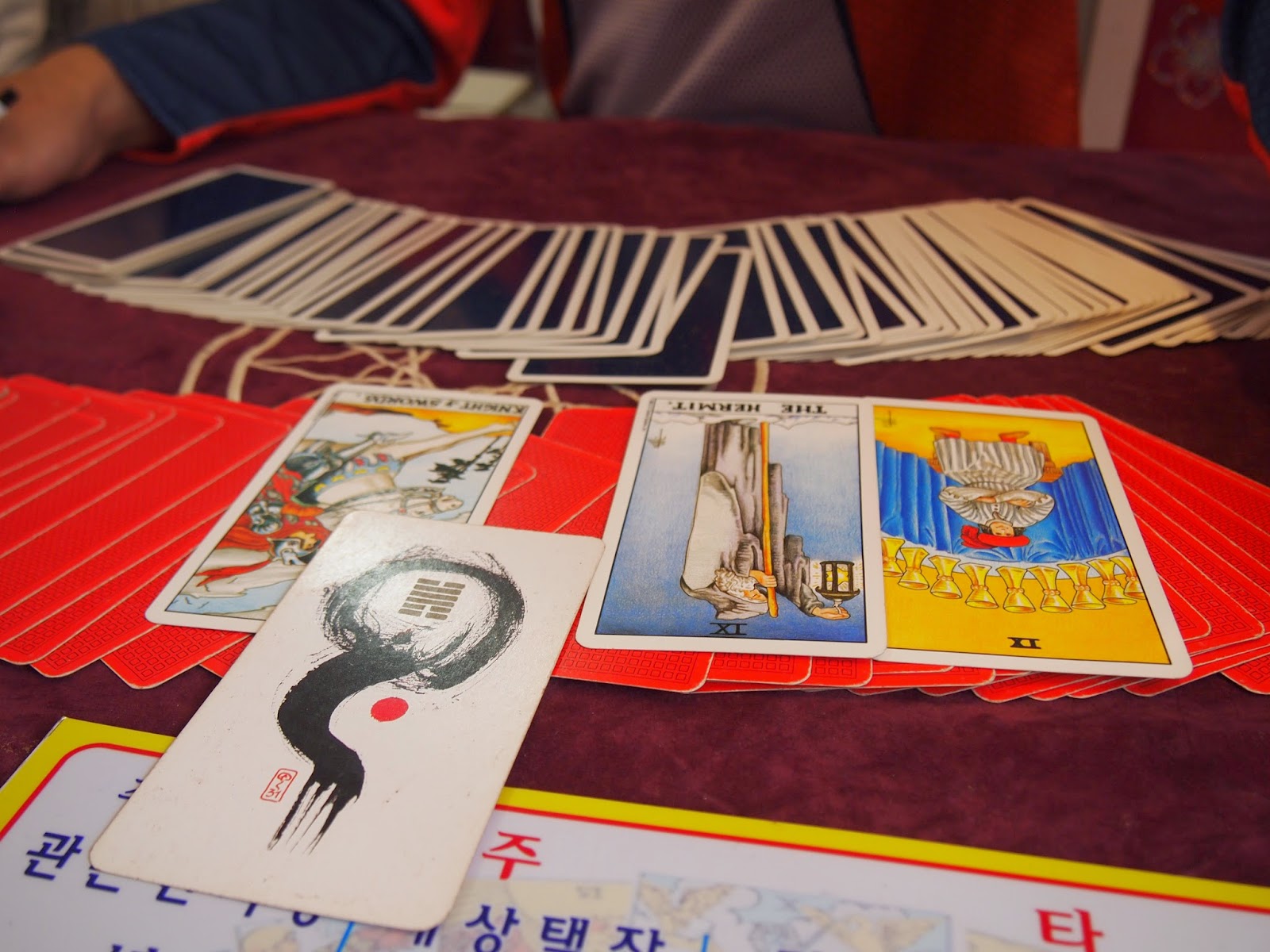 “Oh God,” I wince as the card I have just drawn from a well-worn deck is turned over to reveal an ominous image that instantly reminds me of the woman from The Ring. “That can’t be good,” I note as my eyes take in the oriental ink sketching that surely, in my mind, is indicative of looming death. The man across the table freezes and his eyes meet mine for the briefest of moments. His weathered skin and honest, understanding glance indicate that he’s the real deal.

Unlike the fortune tellers of the West, this jeomjaengee, like most in Korea, is well into the later years of his life and is anything but gimmicky. Dressed in a tracksuit and balding, he doesn’t exactly exude a mystic aura, but he is no-nonsense and quite knowledgeable about the meaning of the Tarot of Marseilles cards (the ones typically used in tarot readings) laid out before me, ready to reveal the answer to my burning question. If anything, the poster of G-Dragon, a former customer of his, and the autographs of Korea’s most popular stars, validate his wisdom, no doubt gained through years of study of Chinese astrology. 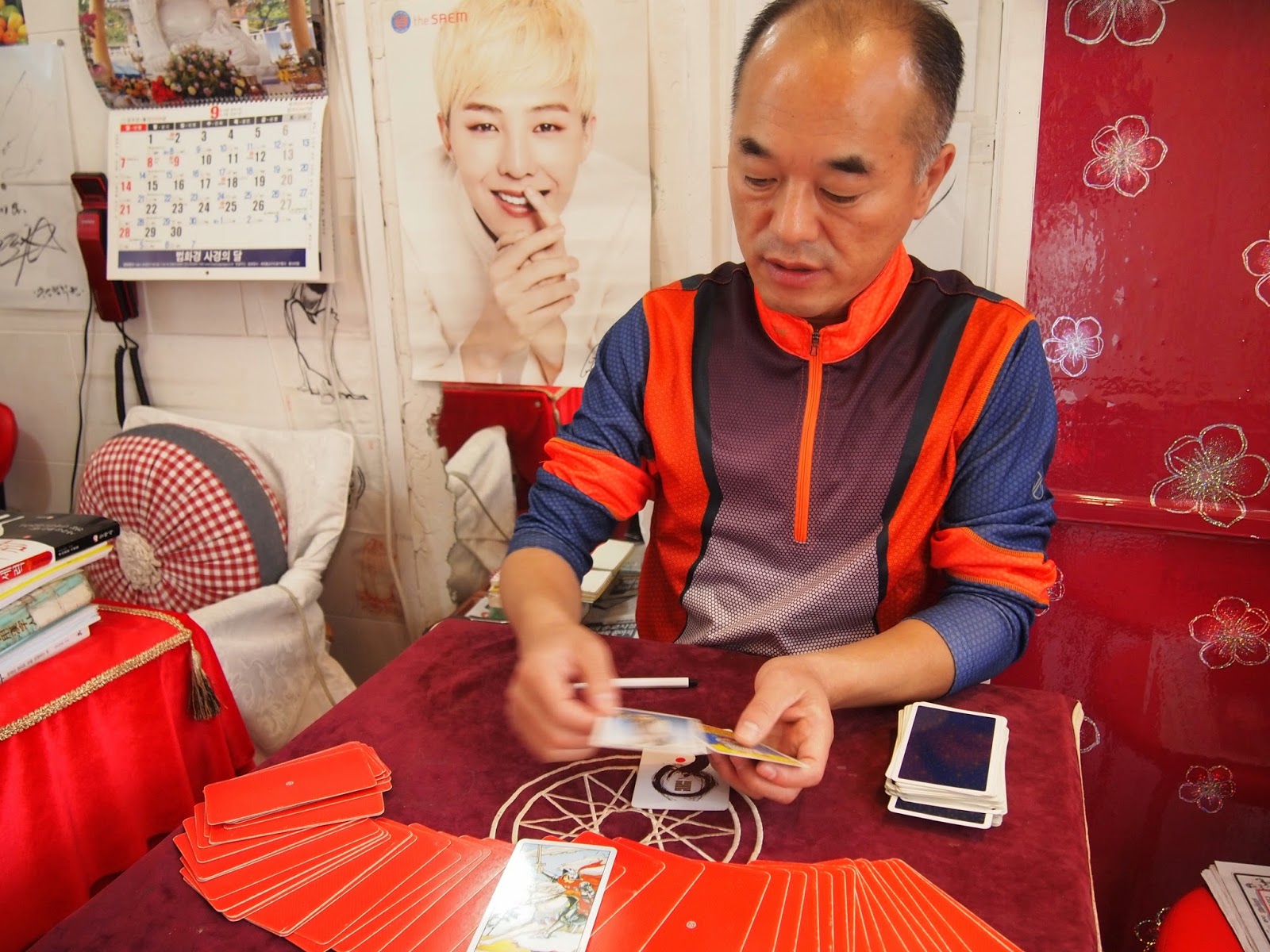 Although tarot cards have been used in divination since the 15th century in other parts of the world, they have only been popular in Korea for a couple decades. As using shrinks is still quite taboo here, many Koreans will visit fortune tellers when faced with a certain dilemma or need advice about an important upcoming event. It’s not uncommon for a woman to seek the advice of a fortune teller in regard to her compatibility with a romantic interest, or a businessman to ask if a specific deal would be profitable or not. As such, Korea’s fortunetelling industry is outstanding in terms of volume and popularity, in comparison to other nations. 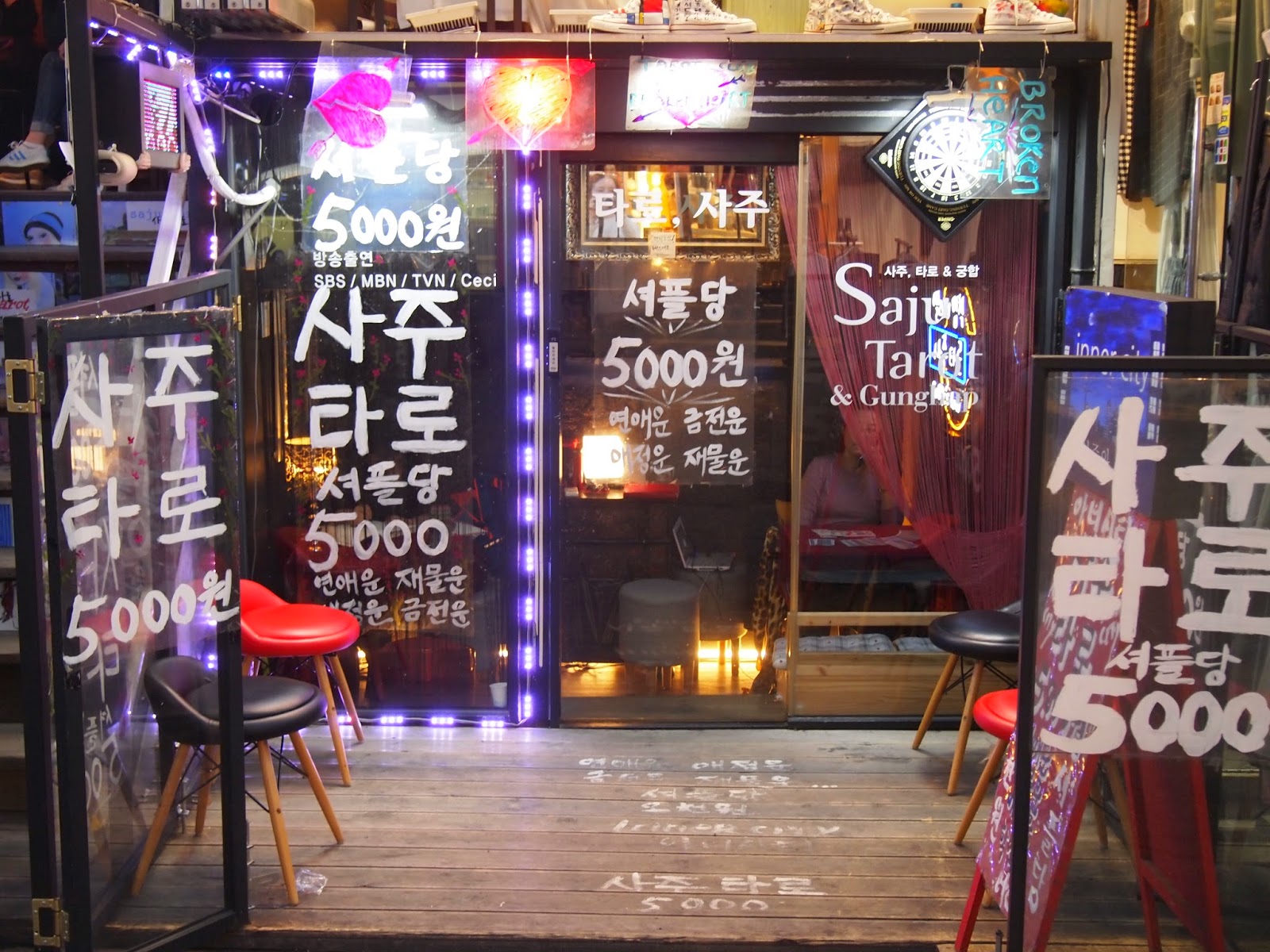 In addition to tarot readers, there are alternative forms of fortune telling, many of which are more traditionally Korean. These include gwansang (fortune telling through facial characteristics), saju (prediction of good or bad luck based on one’s birth date), and other forms of revelation of one’s future by spirits through a mudang, or shaman. 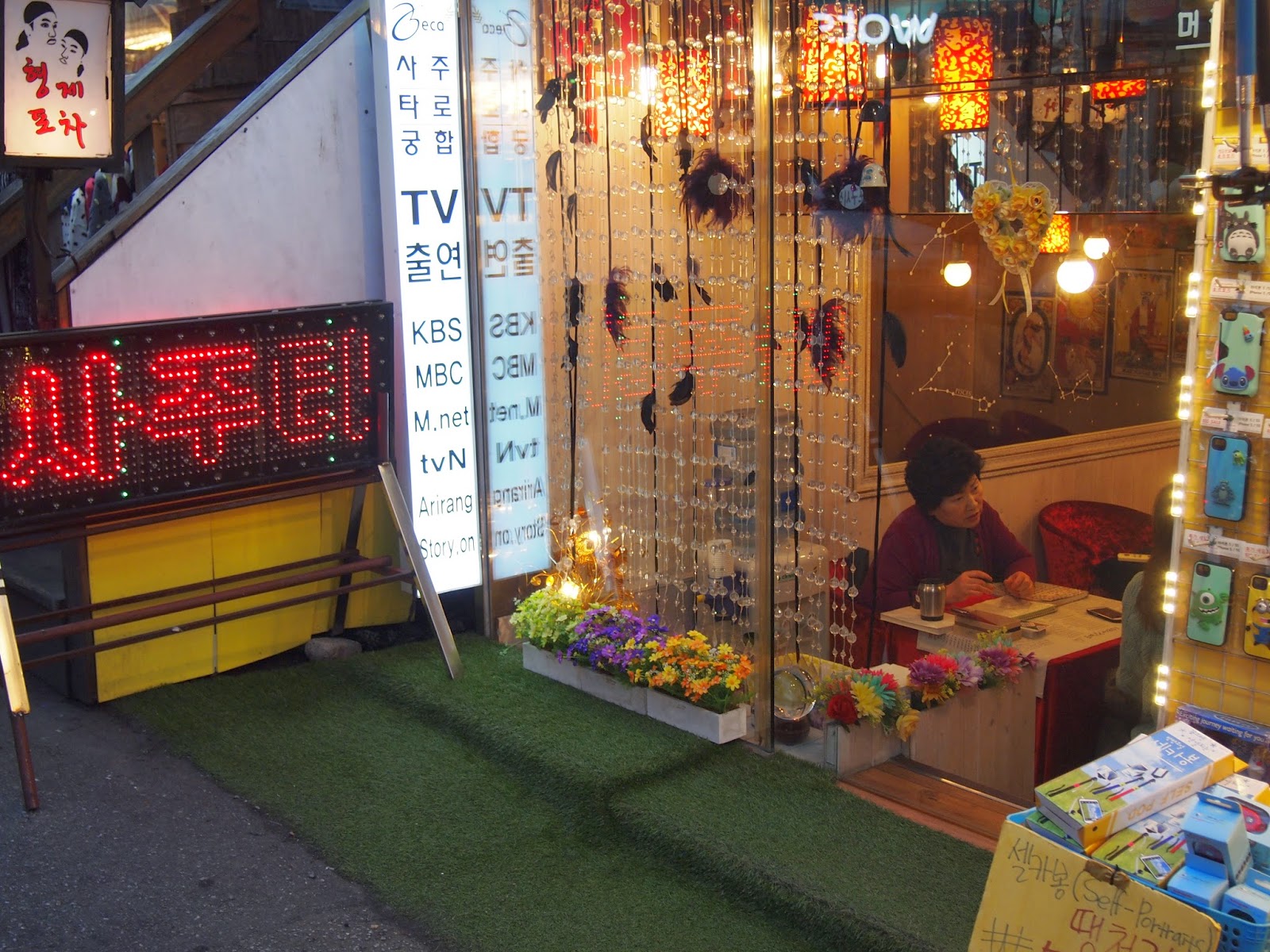 I was visiting the tarot reader mostly out of sheer curiosity (and blog research, of course), but quickly got wrapped up in the moment and found myself hanging on to every word the gentleman said. He reassured me that my horrific card did not imply death, but that it wasn’t necessarily good, either. I had actually fibbed a bit in my question to him and he immediately recognized in the first card that I had told him something inaccurate. He went on to correctly describe in words my exact feelings and worries with each subsequent card I picked. In the end, the answer he gave me was what I suspected but not necessarily what I wanted to hear. 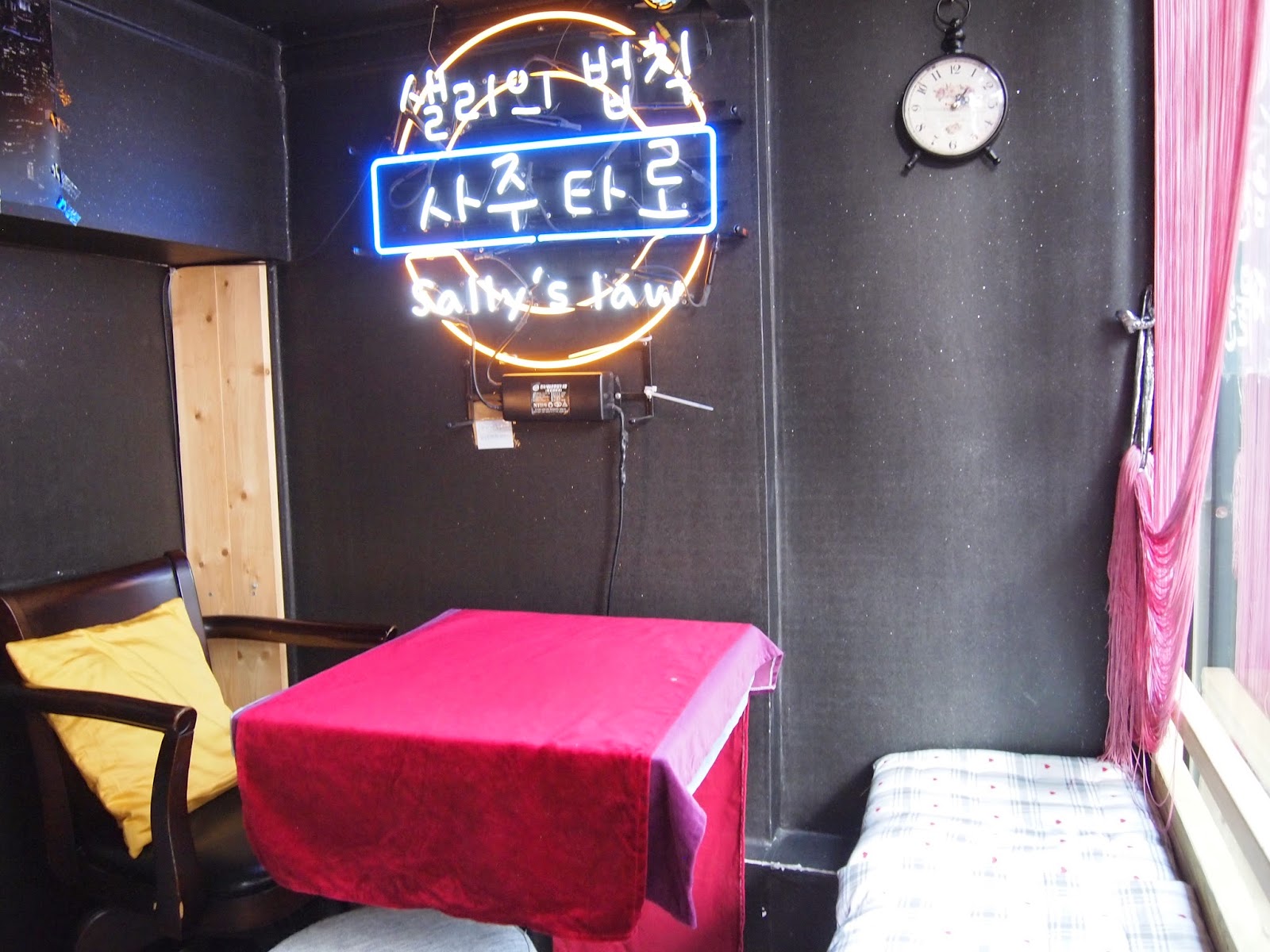 Hoping for a more optimistic outlook, my Korean friend, who had been interpreting the entire time, suggested we try another place. Upon entering, we sat next to a female fortune teller at her table draped in velvet. My friend would later tell me that she felt uneasy around this particular jaemjangee, as her eyes were unable to maintain focus and were darting throughout the room during the entirety of the reading, as if watching passing spirits. Although the cards she used were different and consisted of colors rather than images or icons, her divination was almost exactly the same as the previous one. In addition, she told me shockingly accurate facts about the situation- details so precise that I began to think that maybe there was some validity to tarot after all. 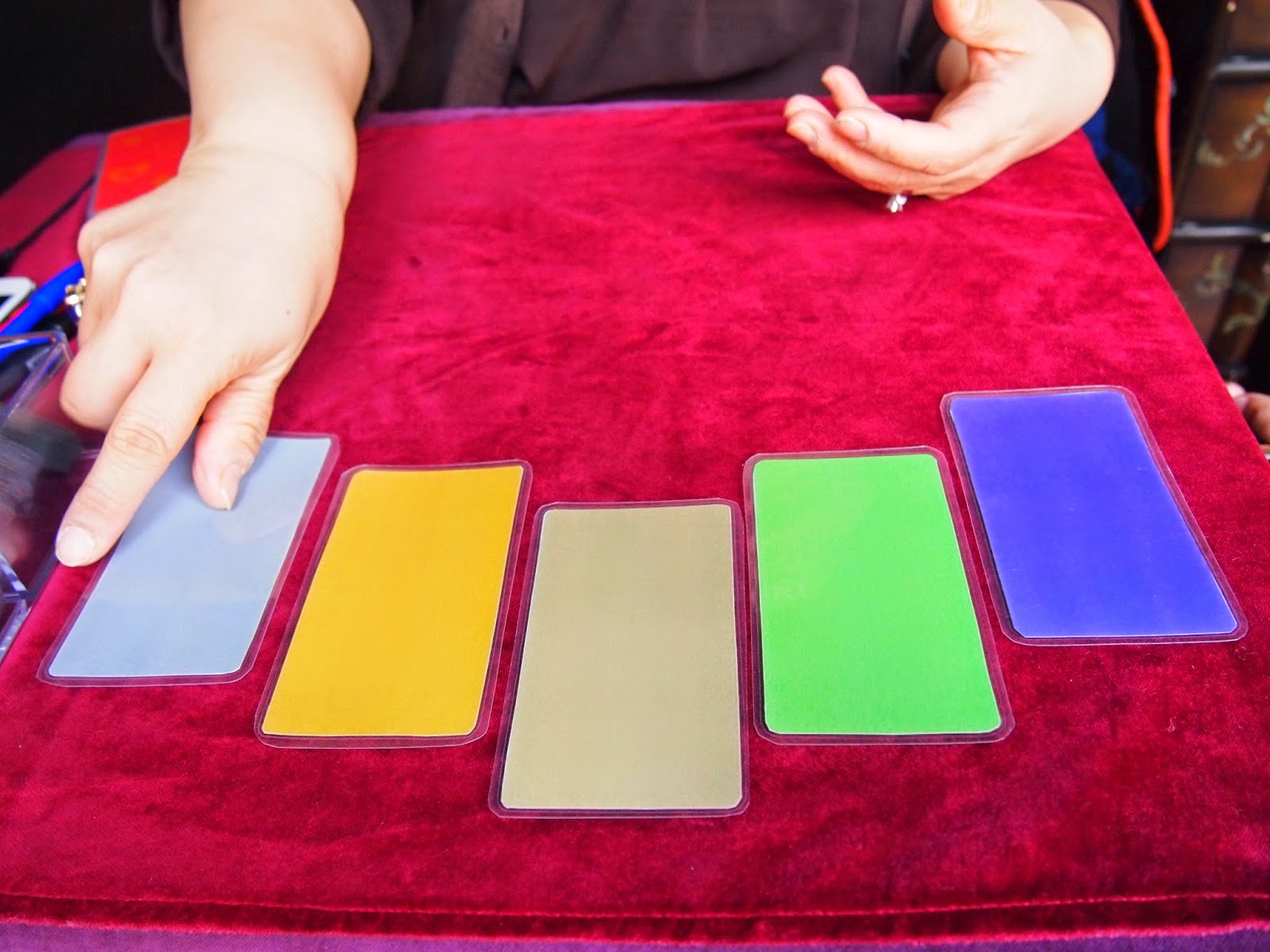 In the end, the answer and advice I received from the two fortune tellers wasn’t what I wanted to hear, but was potentially what I needed to hear. In a way, I left feeling more at ease about my problem. I quickly realized why fortune telling is such a big industry in Korea. In a world where the future is hazy and we are forced to make difficult life choices on our own, it’s a hell of a lot easier to have someone else make a decision for you. Even if that person is a complete stranger. And at 5,000 won a shuffle, the answers to life’s toughest questions are a heck of a deal.

Tarot card and saju readers can be found near Hyehwa Station, along the walls of Tapgol Park in Insadong, and throughout the streets of Sinchon. The two specific tarot card readers that I visited are located on Parking Street in Hongdae. To get there, walk straight from exit 9 of Hongik University Station (Seoul Subway Line 2) and walk straight for about 5 minutes. Take a left at the first major intersection and walk straight. Once you reach H&M, take a right and cross the street. There are a cluster of saju/tarot readers located in the building that sits in the middle of the fork in the road. Note that most fortune tellers do not speak English so it’s best to bring along a Korean friend to interpret.

Words and photos by Mimsie Ladner of Seoul Searching. Content may not be reproduced unless authorized.