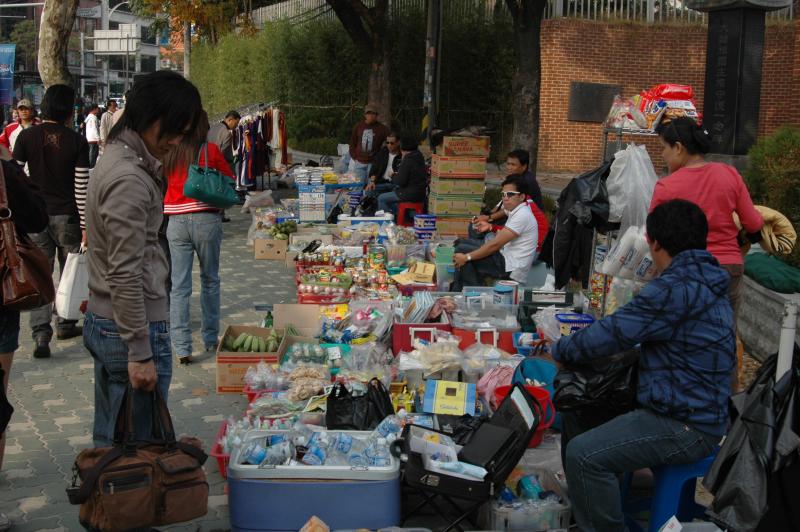 In a move seemingly designed to placate the locals and remind foreigners of their secondary role, the Filipino Market in Hyehwa may be closing in the near future. I’ve blogged about this excellent once-a-week market before, while Extra Korea, Buhay sa Korea, and ZenKimchi have already weighed in. Since we’re all quoting from the same Korea Times article, let’s start there:

Jongno District Office in Seoul has told the Filipino community to stop holding a market in Hyehwa-dong, citing complaints from passers-by and residents.

The marketplace, dubbed “Little Manila,” first emerged in 1997, and takes place every Sunday for Filipinos after attending a mass at the Hyehwa Catholic Church. About 1,200 to 2,000 Filipinos gather at the marketplace, which some consider as a fine example of Korea’s racial harmony. There are about 46,000 Filipinos in Korea, forming the fifth largest ethnic group, following Chinese, Americans, Vietnamese and Japanese.

Father Alvin Parantar, chaplain of the Hyehwa-dong Filipino Catholic Community, who acts as a representative for the ethnic community, confirmed the district office’s request, adding that it was like the district kicking them out for its own convenience without providing an alternative site for their gathering.

“The reasons they gave up us was one, they received complaints from neighbors and pedestrians in the area; two, there were concerns about cleanliness and order; three, they want to redevelop the sidewalk and include a waterfall wall in the area; and four, they want to transfer the market to a new multicultural market,” the priest told The Korea Times over the phone.

Hmm… If you want ‘cleanliness and order’, don’t go to a Korean market, especially the back alleys of Namdaemun. They can get away with it because it’s far from tourist eyes, and that area is unlikely to be redeveloped anytime soon. The shops in Dongdaemun that face Cheonggyecheon push out onto most of the sidewalk, and tend to be more crowded all 7 days a week. Even in the Nowon area the street vendors take over half of the sidewalk most afternoons and evenings. How many fruit sellers does one block really need?

Assuming this new ‘multicultural market’ is in Jongno-gu and provides a better place for traffic control, you might think that’s alright. Unfortunately, Seoul has a history of relocating markets into different areas – anybody remember the Dongdaemun Flea Market before things were relocated to the Sinseol-dong ‘Folk Flea Market’? There’s nothing ‘folk’ about a two-story building with modern lights, a warehouse-style ceiling, and a handicapped ramp: 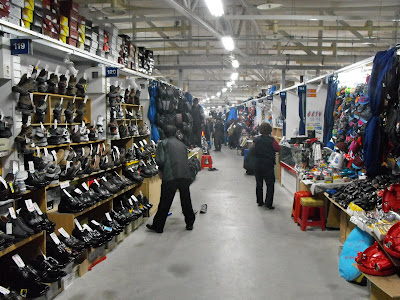 Source: my previous post on the Seoul Folk Flea Market.

What about the piano keys road in Jongno-gu? 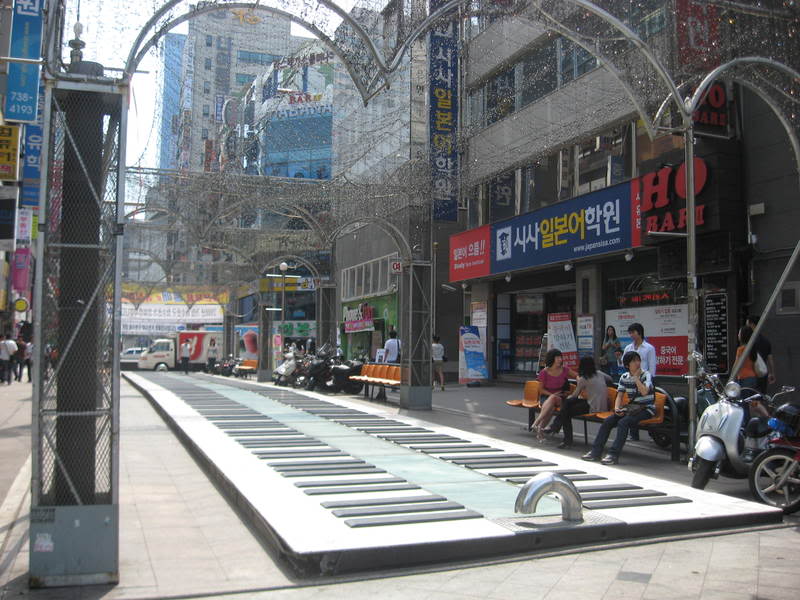 Gone – In the name of new design and a ‘market’, the unusual design / stage was replaced by a number of boring shelters designed to collect rent from street vendors.

The followup story, also from the Korea Times and Cathy Rose A. Garcia, mentions a signature drive to save ‘Little Manila’:

“We are not in favor of the relocation of the Filipino market. We are appealing that the present Filipino market should be retained with policies regarding order, cleanliness, pedestrians and traffic, and that the development plan of the area should integrate the promotion of multiculturalism,” the petition stated.

The petition also highlighted the Filipino market’s contribution to multiculturalism in Korea. While the majority of market-goers are Filipinos, there are also a number of Koreans and foreigners who are visiting the market to sample Philippine food such as barbecued meat, stir-fried noodles, fried banana and rice cakes.

While signature drives have been effective at getting a referendum question on the ballot or a recall election in other countries, both of those efforts were grounded in laws that granted such a petition. Unless these drives are a means to some specific end, they’ll simply be perceived as pieces of paper displaying people’s wishes, not something a government actually needs to consider when deciding what to do. Whatever happens, the privilege of the locals has no business trumping the rights of foreigners.

2 thoughts on “On Filipinos, markets, and forced relocations”