On February 1, 2010, Korean Immigration decided to change some of the rules regarding immigration into Korea. One of the rules was that most E-series visa holders (a visa tied to your job) could apply for and receive an F-series visa (a visa based more on citizenship, heritage, or residency – not simply a working visitor). According to some information from korea4expats.com and “miljeong”, a credible-sounding person on ESL Cafe, the guidelines won’t let the average English teacher gain the coveted upgrade – but there’s hope yet.

On February 1, 2010, Korean Immigration decided to change some of the rules regarding immigration into Korea. One of the rules was that most E-series visa holders (a visa tied to your job) could apply for and receive an F-series visa (a visa based more on citizenship, heritage, or residency – not simply a working visitor). According to some information from korea4expats.com and “miljeong”, a credible-sounding person on ESL Cafe, the guidelines won’t let the average English teacher gain the coveted upgrade – but there’s hope yet.

It doesn’t help that the Korean Immigration Service has a reputation not giving consistent answers to the same question, although it goes without saying that they are the official source for information – no matter what you read on Dave’s ESL Cafe or blogs such as this, they’re the ones with the power.

According to the aforementioned sources, a point system is in force for acquiring the F-2-S visa. Kudos goes to miljeong for posting – and translating – the following form (found on this thread): 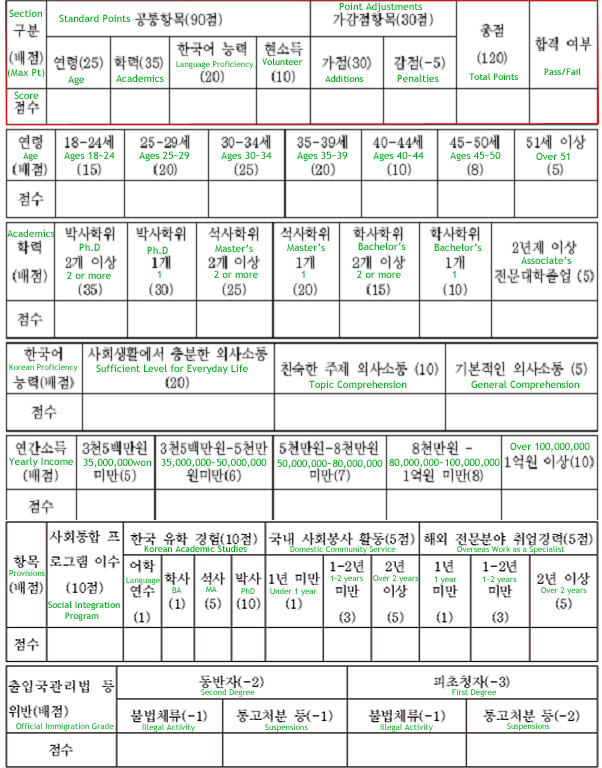 One correction mentioned in the thread: 현소득 in the first major row means ‘current
income’, not ‘volunteer’ as listed.

The top-most section is for scoring one’s total points; each section below shows you exactly how to earn the points. You need 80 points out of a possible 120 points to get the visa, and you MUST have an E-series visa for at least one year before applying for the F-series visa.

Korean proficiency (maximum 20 points)
(Supposedly, this is based on your results from the S-TOPIK, the Standard Test Of Proficiency in Korean, but I’m not sure whether the three levels – Beginner, Intermediate, and Advanced – match up with the three point levels described below)

Take the Social Integration Program = 10 points. This thing is talked about in the Korea Times and on korea.net (use Google to see the cached page, as the original page seemed to have disappeared when I looked).

Korean Academic Studies – these are extra points given if your degree was earned in Korea.
A Korean language certificate(?) = 1 point
B.A. = 1 point
M.A. = 5 points
Ph.D. = 10 points

Domestic Community Service – while there’s no clear information on this, volunteer work that can be verified seems to be what’s considered.
Under 1 year = 1 point
1-2 years = 3 points
Over 2 years = 5 points

Overseas Work as a Specialist – again, no clear information on what this is. Don’t worry about it unless you’re just a few points short.
1 year = 1 point
1-2 years = 3 points
Over 2 years = 5 points

There are also some penalties built in – a maximum of 5 points – for ‘First Degree’ or ‘Second Degree’ infractions that include illegal activity and suspensions. It’s not clear what guidelines are being followed for these points, but if your visa has been suspended or you’ve been caught doing something illegal, you can bet it’ll be counted here.

On paper, this looks like an interesting system – and quite similar to the point system used in Canada’s Immigration System. In reality, however, getting this particular visa is almost certainly harder than it looks. Whether it’s a lack of knowledge about the procedure, or a worker’s inability to do their job, it means your job is a bit harder.

A 33-year-old with a Ph.D. from Korea and Korean proficiency making 80,000,000 won / year will have no problems becoming a Korean resident if they choose. The average native English teacher (twenty-something, Bachelor’s degree not from Korea, little or no Korean ability, smaller income) will be scoring 40 of the 80 points needed.

While I’m convinced Korea is trying to extend this status to only the most deserving people, the bar is set far too high. The vast majority of foreigners already here don’t qualify, and it’s not going to attract the people that could qualify. That’s Korea prerogative, of course, but it looks kind of silly if this program is officially started and nobody uses it.

There does come an important question – do you really want to be a resident of Korea, or do you just want the ability to change jobs at the figurative drop of a hat? Once upon a time the only way to be considered a ‘resident’ was to marry a local or be in Korea for 5 or more years. While marrying a Korean is still a way to get an F-2 ‘residential’ visa, the aforementioned question is more than philosophical. Do you want to call Korea home, or simply the place where you currently live? Do you have plans to resume life in your home country, or do those plans not exist? When a Korean asks you, “When are you going home?”, what do you say?

While it’s nice to be able to change jobs if needed, that’s one right you probably won’t want to exercise too often. Just like in the rest of the world, changing jobs often might lead to future employers wondering about your commitment to a given job. Even as a resident, you’d still need to register with the government to offer private lessons legally – but that’s a far cry from a large fine and being deported under the E-2 visa rules.

If you want to start a business or make Korea your home, go for the F-2-S and make your life a lot easier. If you decide to stay in Korea for a significant length of time (for the sake of argument, I’ll say at least 3 more years), go for the F-2-S as soon if you have the points. If you’re just here for a year or two, you probably won’t have the points needed to qualify for the visa anyway.