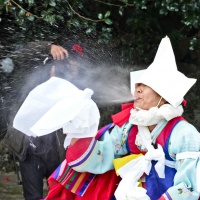 With roots emanating from the animistic tradition of central Siberia, Korea is one of very few developed nations to have maintained a Shamanic heritage over thousands of years. But after decades of neglect and government-sponsored eradication efforts in the 20th century, what’s left of Korean shamanism?

Filmaker, writer and photographer Joey Rositano has spent more than three years attempting to answer this question, documenting, researching and collecting myths and stories from the elderly practitioners of shamanism on Jeju island. His documentary ‘At Search for Spirits on the Island of Rocks, Wind and Women’ premiered at the 2014 Jeju Women’s Film Festival and a book of his photography work entitled ‘Spirits: Jeju Island’s Shamanic Shrines’ was released this week. This is part one of a two part conversation.For more on Joey’s documentary, to find out about shrine preservation efforts on Jeju or to order a copy of ‘Spirits: Jeju Island’s Shamanic Shrines’, go to https://pagansweare.wordpress.com/