Source: The Korea Herald, as edited from the Anti-English Spectrum’s website.

Source: The Korea Herald, as edited from the Anti-English Spectrum’s website.
The K-blogosphere is fast. Really fast. I’m sometimes amazed at how blogs like Brian in Jeollanam-do, Gusts of Popular Feeling, and First-Level Korean (among many others) can put together a story in as much time as a reporter may have – at 0% of the paycheck. Great work guys – it makes my blogging life a lot easier 🙂 Different takes of the same story are posted on the Korea Times or the Korea Herald, but it’s the bloggers that can reverse some of the spin received during the treatment of the story.
The summary, for those too busy to keep up with umpteen blogs with umpteen versions of the same story: Andrea Vandom, with support from ATEK, wrote a letter to NHN (the parent company of Naver) demanding that they remove much of the text from the Anti-English Spectrum for being against Naver’s community principles, as well as against Korean law and UN guidelines. Ms. Vandom specifically pointed out the AES’s xenophobic and racist tendencies, along with vigilante-style stalking of suspected illegal actions. The response from Naver was less than helpful (from the Korea Times):

Naver has rejected a request by native English teachers to remove what they call derogatory and racial postings on a blog known as the “Anti-English Spectrum.”

NHN, the operator of Naver, told The Korea Times Thursday they had concluded that they don’t see anything in the blog that violates the standing regulations or its internal rules.

Apparently they either didn’t look very closely or didn’t understand Korean very well. Adam Walsh’s article in the Korea Herald claims some of the most offensive content has been removed (see the last paragraph), yet discussions about stalking foreigners continue. An excerpt from that article:

An issue many have with Anti-English Spectrum is its past use of racist language, such as referring to foreigners as “Black pigs,” saying that foreigners engage in “sexual molestation,” and that they “target children.”

Another AES action that has gone further than your friendly neighborhood watch involves them engaging in types of vigilantism. The group’s administrator admits to stalking foreigners. “Whenever I have to prepare a policy report or embark on the pursuit of an illegal foreign lecturer, then I end up working until dawn because I throw myself into it, braving fire and water. Then because I have to be at work in the morning, I don’t get any sleep, and therefore am physically very tired.” They have also stored information and photographs on their website of non-Koreans they have followed.

As for charges of racism, Anti-English Spectrum’s host Naver.com, said they have received no complaints. The PR department for Korea’s biggest portal stated that even though the cafe is rather large — having 17,000 members — prior to being contacted by The Korea Herald a representative said she was unaware of the group. When asked about the “black pig” comment, the representative stated that “in this case ‘black pig’ is definitely a racist comment.”

So why hasn’t action been taken? Could it be because Naver doesn’t want to stir up some 17,000 supposed members – some of which are the biggest netizens in the country? Or is ignorance of the group by Naver truly bliss? It’s harder to take action against something if you don’t personally feel affected by it – and foreigners that barely use their website isn’t likely to force their hand.

It seems quite surprising that few people have tossed the ‘L’ word around yet. Yes, that ‘L’ word – Libel. Pick out almost dictionary definition you can find – damaging someone else’s reputation through writing is the common thread. I know it sounds ironic for a foreigner to take a Korean to court for damaging our reputation – but look at one definition for yourself, as taken from an online business law glossary:

Libel: A libel case consists of published material with the following criteria: (1) The material is defamatory; (2) the written statements are about someone who is identifiable and living; (3) the material is distributed to someone other than the victim. A key in a libel case is that the victim’s reputation must suffer as a result of these written words in order for the action to be actionable.

Have foreigners’ reputations been damaged as a direct result of AES? Whether a Korean libel lawsuit would allow for multiple plantiffs or just a single one, Almost any decent lawyer could argue all three points as mentioned above.
Who is the guilty party, though? The AES as a whole? Naver, for not shutting down a website that is against the law / their own principles? The person / people whose posts are allowed to promote a racist / xenophobic agenda? The lawmakers who go on record with the same racist / xenophobic agenda? And how has a foreigner’s reputation been damaged? Both of those things would have to be figured out before a libel case could go forward.
If it were just a ‘hate group’ of people who simply don’t like foreigners, they might be easy enough to ignore. But these people have the ears of government officials – the ones in charge of making the rules allowing us to come to Korea.
How to respond? Kushibo recently posted an e-mail he sent to the National Human Rights Commission of Korea (e-mail them yourself at [email protected] or [email protected]). There’s also an online contact form to send in a complaints to that organization at http://www.humanrights.go.kr/english/guide/application_01.jsp (see this page for more information); you can also call them at 1331 from Seoul; 02-1331 outside of Seoul. If you want to make an appearance in person, their office is on Euljiro-1-ga – Kushibo has a map to it – copied and pasted from his blog: 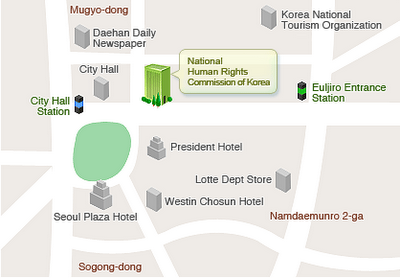 I wonder how they might respond to a group of

hundreds of English teachers, showing up in their office at the same time, with the same complaint.
Readers: comments are open. Is there a libel case against the AES? How has your reputation been damaged by AES? Are they even to blame for the reputation of foreigners in Korea?

17 thoughts on “On Naver, the Anti English Spectrum, and what’s next”