Few things in life seem to scare Koreans more than tests. The teenager that can play any number of ultra-violent first-person shooter computer games (complete with ‘Headshot!‘ often coming from the computers’ speakers) gets nervous when it comes to a test.

Few things in life seem to scare Koreans more than tests. The teenager that can play any number of ultra-violent first-person shooter computer games (complete with ‘Headshot!‘ often coming from the computers’ speakers) gets nervous when it comes to a test. But it’s far more than just a test.
Although colloquially known as the suneung, it’s officially called the Daehak suhak neungnyeok siheom; despite its importance, it’s only offered once a year – the third Thursday of November. It’s only taken by high school seniors, but other grades may take a ‘practice’ test on the same day – for those lucky teachers, it might mean a half or full day off. Today is also the high school placement test for third grade middle schoolers (9th grade in the US) to get into high school. As a result, middle school teachers get today off as well in many cases.
Because the suneung plays such an important role in one’s adult life, it’s prone to the sort to anxiety one might expect from, say, the American SAT, times 50. Parents go out to pray for their kids. The military stops exercises and drills for the day. Companies tell people to come in to work later to reduce traffic jams. 1st and 2nd grade high-schoolers cheer on their seniors in high school. This blogger did an excellent photo essay on the suneung – a sample photo: 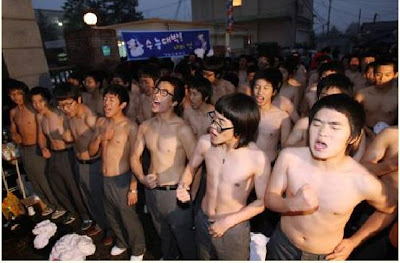 We can learn a little through Wikipedia’s page on the College Scholastic Ability Test. A high school senior is tested on Korean, Math, English, Social Studies, Science, other Foreign Languages, and ‘Vocational Education’ – a category that may test you on anything from ‘Introduction to Fisheries to Programming’. This thing lasts five periods, and you know it’s going to a long day.
There’s an interesting Korean belief – what university you attend, what job you get, and where you are at 60 years old is based on this test. While it may not be as accurate anymore, it still plays a huge part in how your life will progress. To attempt a Western analogy, you may have a great life even if you don’t go to Harvard or Stanford, but you’d better go to college. While Koreans naturally aim for the SKY schools – Seoul National University, Korea University, and Yonsei University, much like the ‘Ivy Leagues’ of the USA – their scores may either assist them in earning a spot or force them to choose a different major.
If you’ve lived in Korea for any length of time, you’re already familiar with the test-taking / cramming culture that provides the predominate mindset. This video gives some more information, but even this 12-minute video can’t tell the full story when it comes to getting into university. There’s another test to look forward to.
It’s called the nonsul – a writing test that the individual university offers. These tests are supposedly neither standard, multiple choice, nor easy to study for. Wikipedia seems to think “no more than 20 high-class universities at most because huge efforts and time are needed to look into the answer sheets and fairly evaluate it.” As a result, there’s little that can be said about them in general – and since it’s much more an unknown, one is typically more insecure about such a test.
That such a system places far too much emphasis on tests has been pointed out for decades – and thus far little has been done to change it. It is, of course, those that were most successful on these tests that are mainly now in positions of power – after having gone to the best universities, which were prepared for by going to the best hagwon and finding the best tutors. The next time you wander by Daechi-dong, take a look at how many ads for hagwons and private tutors you see.

It’s almost heart-breaking as a teacher to work in this system. It’s not because I don’t want to see them lose years of their life to a test, but because the system both discourages creativity and encourages the rote memorization / regurgitation that such a test requires. There’s no creativity needed to circle ‘B’, and too much creativity may even be seen as a bad thing on such writing tests as the nonsul. Seriously – what’s the point in taking a ‘creative writing’ class, music lessons, figure skating lessons, dance lessons, or any other artistic venture when the ‘only’ things you have to know for university are your native language, English, math, and perhaps a few other minor things?

There are the occasional stories of universities being more holistic in their admission requirements. KAIST and POSTECH began the new trend from a story back in March 2009, while admission officers are supposedly going to accept 10,000 students from another story in March 2009. I haven’t seen any stories like these more recently, but my eye is definitely tuned towards them.
Here’s my modest proposal: Consider the whole person. Yes, test scores can be an indicator of better brains, but more often than not that indicator doesn’t – and can’t – tell the whole story. Just because someone is a genius on a test doesn’t mean he knows how to work with a group, have a creative idea, or express themselves clearly to someone else. Paper doesn’t talk back, after all.
The undergraduate college application – even at an American one – needs little more than the following:
Test scores, teacher recommendations, and so on may play a small role, but their emphasis should be downplayed to the point where such numbers are trumped by the real person.
Korea may produce ‘results’, but it’s time to see how much those results cost and begin the painful process of change.