A great thing that happens when you’re about to get married is that you really notice the number of good friends that you have in your life. It’s a time when new friends and old ones come together to help you out and wish you well, and you feel only the need to return all of the favours you’re receiving. But of course you’re too busy getting married and just have to make do with the knowledge that you’ll help them back again, someday.

A great thing that happens when you’re about to get married is that you really notice the number of good friends that you have in your life. It’s a time when new friends and old ones come together to help you out and wish you well, and you feel only the need to return all of the favours you’re receiving. But of course you’re too busy getting married and just have to make do with the knowledge that you’ll help them back again, someday. 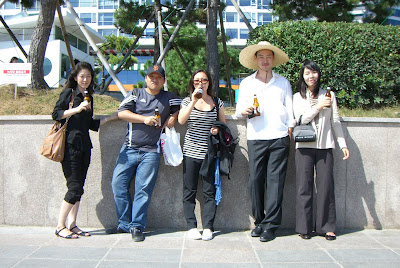 These five people in the photo above are Toastmasters from SRTM. They’re also good friends, and came down from Seoul to Busan for the wedding. From left to right is Judy, James, Dory, Chris and Alice.

And yes, I do believe they are drinking Hoegaardens in the morning. 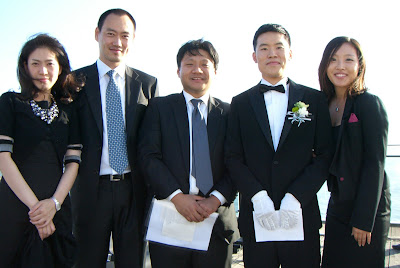 As you can see, they scrubbed up nicely. They were among the first to arrive at the venue. 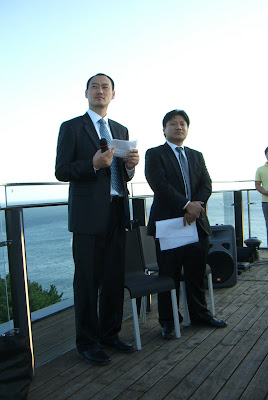 Of special mention is the fact that Chris and James acted as MCs for the wedding. I realised rather late that the wedding needed a host to introduce the speakers and explain to the guests in English and Korean what was happening. Chris and James agreed to do it, with little time to prepare, and did a perfect job. Chris spoke in Korean and James followed closely with his truly appropriate Australian accent. Heather and I are both deeply thankful to them and all of the other good people who helped us on the day.

And I also think that the photo above belongs on the cover of a music album. 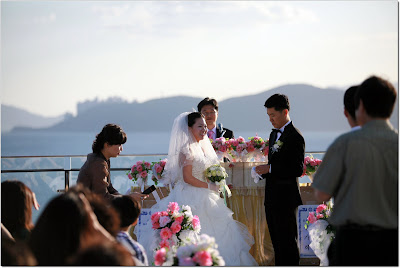 This is us exchanging our wedding rings. A funny thing that happened was that Mr Kang wanted to do the ring exchanging right at the beginning, but the rings were still downstairs. So we just ended up doing it later in the ceremony. Maybe I should have chosen a best man after all.

I told Heather beforehand, no matter what goes wrong, it doesn’t matter as long as we end up being married by the end of it. 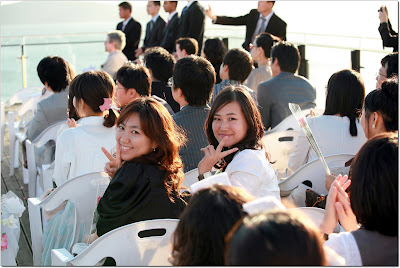 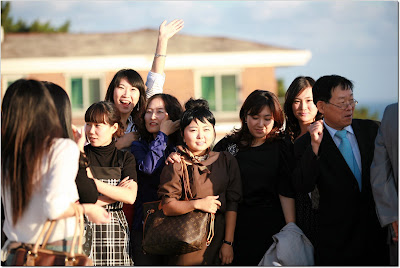 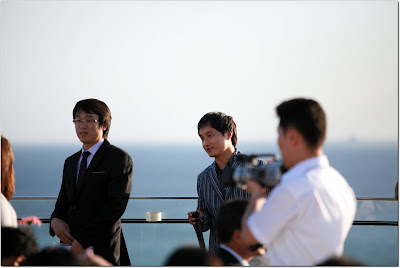 King and his friend sang a Korean ballard for us on cordless microphones. I had a slight notion that it might turn out a bit funny, but it was very well done. After that Mr Yeom, who was once an opera singer, sang ‘You Raised Me Up’ originally by Secret Garden. It was the first time I’d ever heard him sing in English. 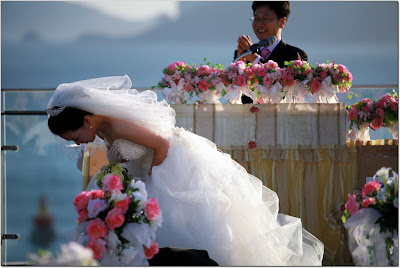 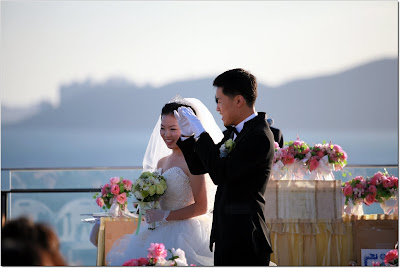 Then we bowed to both parents and to the audience, to show our respect. It’s always funny when I bow in the traditional Korean way, which is to crouch on the floor, because my knees aren’t very good at the motion and it looks clumsy. You have to practice from a young age. 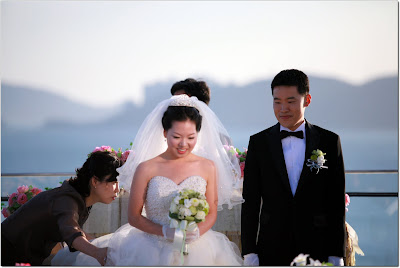 In this photo you can see Heather’s ajumma helper, who was constantly preening and making sure the dress was behaving appropriately. 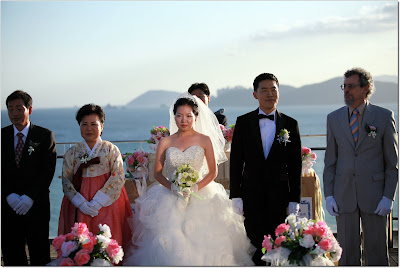 Then we bowed with our parents to the audience. That’s probably the main difference between Korean and Western weddings, there’s a lot of bowing involved. 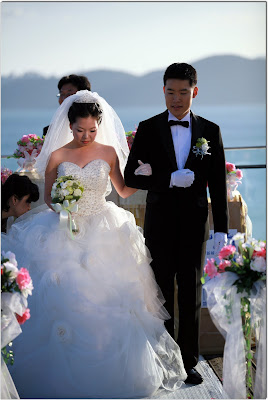 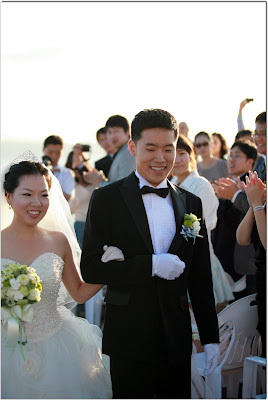 Then it was time for the wedding march up the aisle, hand-in-hand, to symbolise our first steps into a new future. 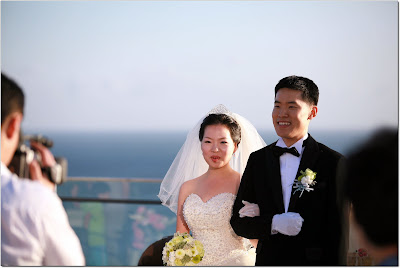 The sun stayed out for us quite nicely, and only just began to set when we were finishing the ceremony. 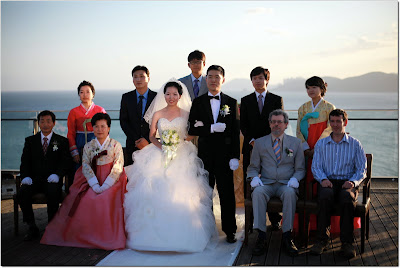 Then it was photo time with the family members. My dad and brother spent one week in Busan before the wedding, and got to know Heather’s family. They reckon that Heather’s lot are a good bunch of people. Heather’s family were also pleasantly surprised by how laid-back we Australians are. In particular, my new mother-in-law was impressed by how much my brother can eat. 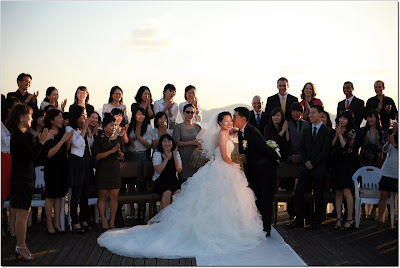 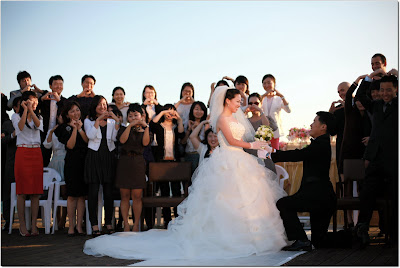 In the bottom photo, the people in the background are all making little lovehearts with their hands. 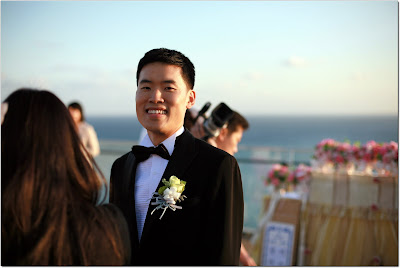 I don’t remember having this photo taken, but I do remember being happy. 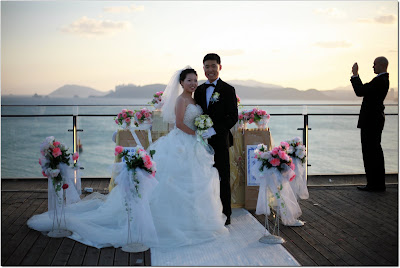 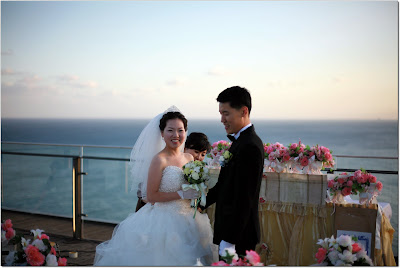 Well, what can I say? It was really a great day for both of us and we only hope that the guests enjoyed themselves as much as we did.
Weddings take a fair bit of planning and things can get stressful, but on the day you just need to remember that it’s your day and the only thing you need to do is to savour the moment. 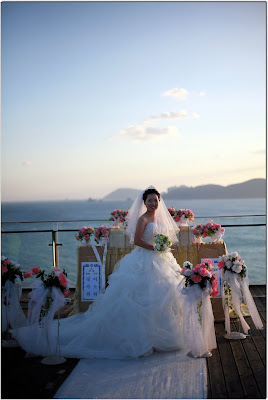 My lovely bride at sunset. These days I mostly see Heather walking around at home in her pyjamas, but she’s just as lovely. 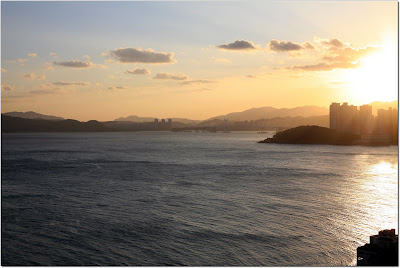 The weather was great and really helped make the day. After we had finished up on the sixth floor, we made our way down to the restaurant level in the same building and had dinner. Then it was time to move to the second round in true Korean fashion, and we headed out to a new bar with a special reservation, beachside at Gwangali.