This weekend was the weekend of the annual Boryeong Mud Festival. This is a festival in the North of the Republic of Korea where loads of mud is driven into the small coastal town and everyone has fun in the mud. We went last year, but I decided not to go again as it was so close to my China trip.

Here’s what we decided to do instead.

This weekend was the weekend of the annual Boryeong Mud Festival. This is a festival in the North of the Republic of Korea where loads of mud is driven into the small coastal town and everyone has fun in the mud. We went last year, but I decided not to go again as it was so close to my China trip.

Here’s what we decided to do instead.

On Friday the sun was shining and it seemed rude not to go to the beach. We picked Dadaepo as it’s usually so peaceful down there. It has a long stretch of soft sand and there is nothing to obstruct the view of bright, blue sky. I hadn’t made much use of my tent since Jisan festival, so we packed it up and thought we’d stay the night. We hit the beach with a picnic of Nachos and Makeolli, just in time to watch the sunset. It was really amazing to watch, especially as a gaggle of photographers turned up at the same time to snap some pictures. I loved watching one couple, the girl walked down the beach, taking pictures here and there, while her partner took pictures of her taking pictures of the sunset. It was all very Inception-esque. It’s a pity that he didn’t seem to actually take any notice of the sunset. 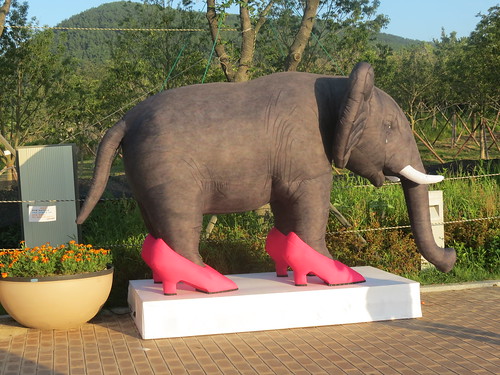 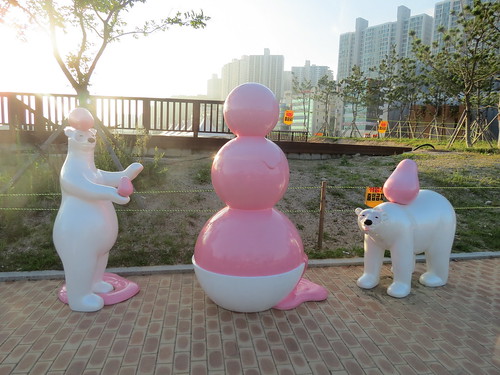 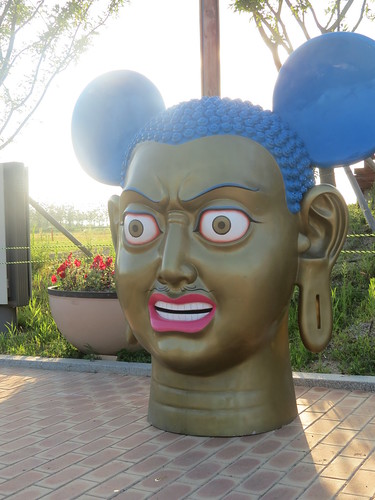 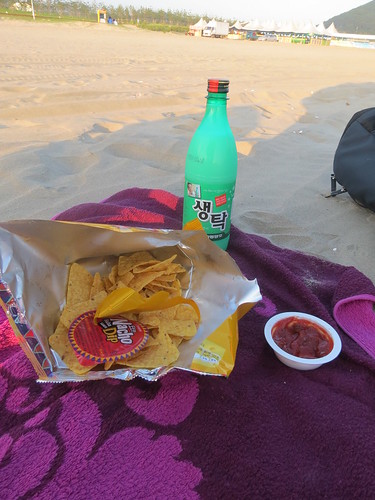 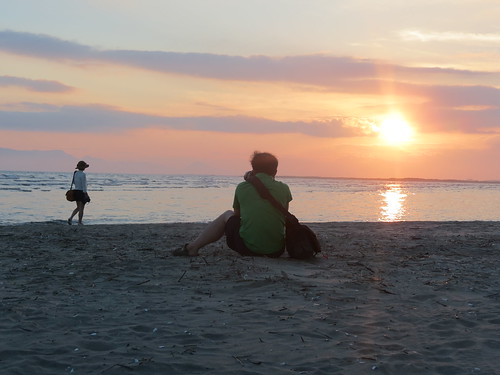 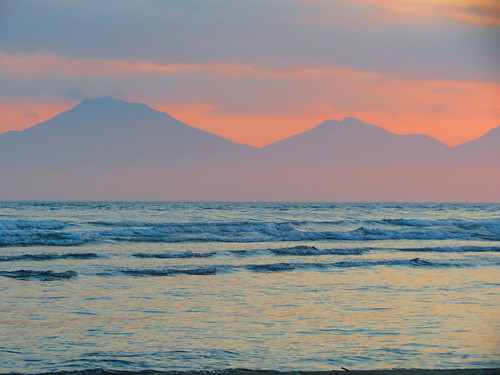 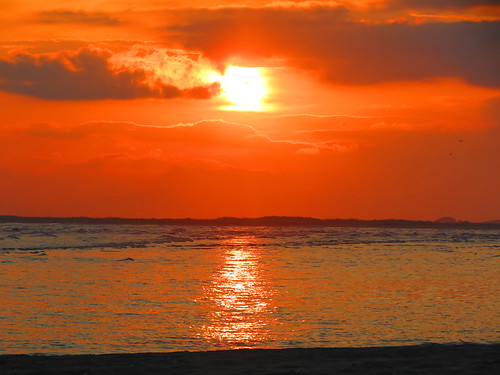 Once the sun had gone down we went to Sau-re, a chain of BBQ restaurants, to get our fill of meat. It’s not my favourite BBQ, but the meat was amazing. On the way there I finally got to watch Dadaepo’s Sunset Fountain Of Dreams. Koreans love their fountains, and compared to the fountain show at Lotte, this one was amazing! 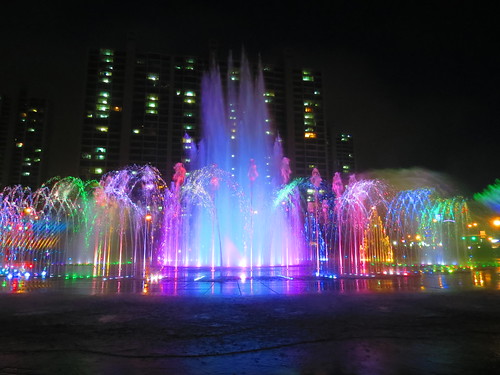 After dinner we stocked up on drinks and food and headed back to the beach and put up the tent. The beach was completely deserted, something I’m not used to in Korea.

The next morning the sun woke me up at 5 so I caught some early morning rays. I was surprised to see so many people on the beach. There were people walking their dogs, jogging, and a handful of elderly ajummas and ajoshis scouring the sand for any treasures the sea had left behind. I had a snooze and when I woke up at 8 the beach was deserted again.

We spent a few hours there, ate some breakfast and dipped in the sea, trying to avoid the mini crabs that were scampering around on the sand. By 11 the sun was really hot so we left to get a well deserved shower and bit of air con time. 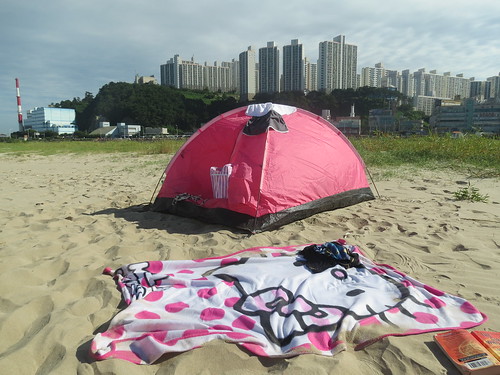 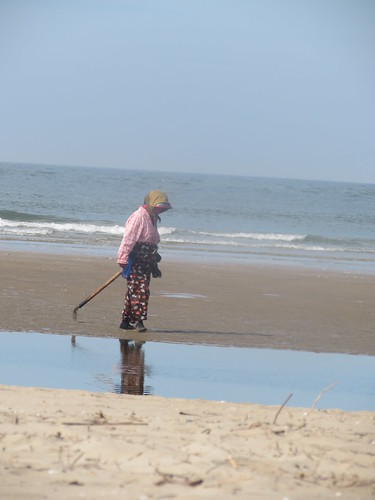 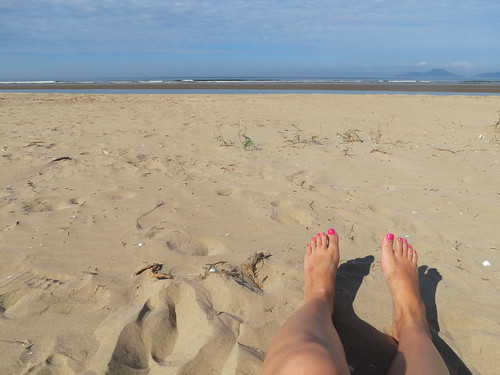 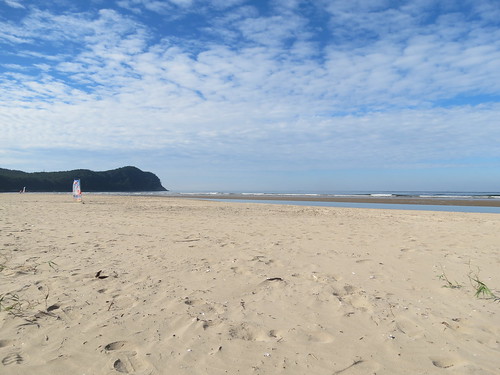 Feeling refreshed and ready, we lathered on the cream and headed upto Songjeong beach, another beach that is not so popular as Haeundae or Gwangalli but is still really great. We met up with Katie and Alex and spent the afternoon playing ball games.

When the sun went down, we headed back to their apartment and cooked ourselves an amazing Spanish themed feast, including a tortilla, garlic and lemon prawns, spicy rice, roasted vegetables and some salad. We topped it off with some Sangria which sent Nick and I to sleep as soon as we sat on the sofa to watch Ground Hog Day. Ooops. 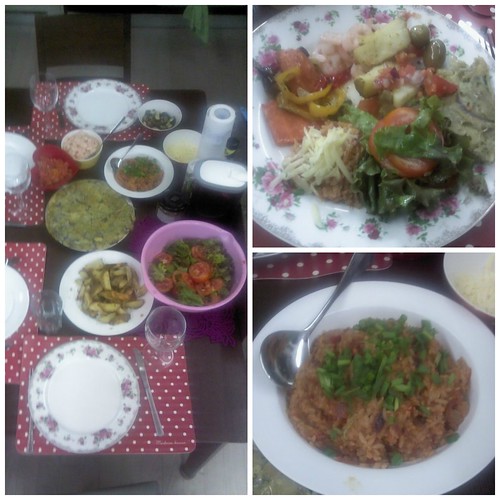 Sunday morning we lazed around Katie’s apartment, and then went for a breakfast picnic on Dongbaek Island. We sat on a rock, looking out to see and ate in the shade. It was so nice and cool compared to the beach. Having had my fill of the heat, we went to Nampo so I could grab some things for my holiday, and then finished the night off with an episode of Luther. Is anyone else watching it? What do you think? 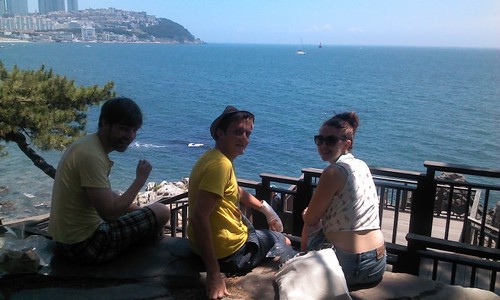