When I spend time with our Korean friends, we share experiences, but not often thoughts or conversation; they can’t speak much English and I can’t speak much Korean. When they laugh, I don’t get the joke, when they suddenly decide to do something, I usually don’t vote, only follow. The language barrier separates us and it’s easy to fall into an isolation of my own thoughts and my own world. It’s a frustrating reminder that the time I’ve spent studying has not yielded adequate results, and while I try to follow what those around me are saying, it requires a sustained level of concentration which my mind seems ill-equipped for after all the hundreds of ups and downs of fifty-five hour trading week. It was with some trepidation then, that I opted to extend the experience from a few hours to an entire weekend spent at the summer house of one of our group, two hours north of Busan in Hapcheon County (‘합천군’), West of Daegu.

When I spend time with our Korean friends, we share experiences, but not often thoughts or conversation; they can’t speak much English and I can’t speak much Korean. When they laugh, I don’t get the joke, when they suddenly decide to do something, I usually don’t vote, only follow. The language barrier separates us and it’s easy to fall into an isolation of my own thoughts and my own world. It’s a frustrating reminder that the time I’ve spent studying has not yielded adequate results, and while I try to follow what those around me are saying, it requires a sustained level of concentration which my mind seems ill-equipped for after all the hundreds of ups and downs of fifty-five hour trading week. It was with some trepidation then, that I opted to extend the experience from a few hours to an entire weekend spent at the summer house of one of our group, two hours north of Busan in Hapcheon County (‘합천군’), West of Daegu.

Recently Korea has suffered from an outbreak of foot-and-mouth disease, and once we left the highway one of the realities of this became evident as our stuffed minivan was quickly subjected to decontaminating spray at a checkpoint. It wasn’t the last; shortly before we reached the isolated valley in the mountains that was our destination, we had to repeat the experience. It may only be a matter of time before movement is prevented entirely as it had to be in the UK in 2001. 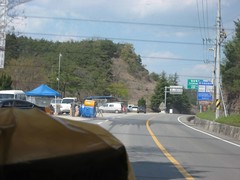 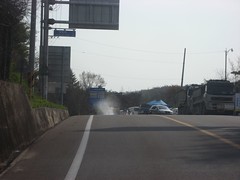 When we drove down the final mountain the valley that emerged before us comprised of six or seven small dwellings clustered amongst the fields. It was the type of place which was so small and dispersed you had to wonder whether it could even be called a village. I’d expected our weekend home to be a rather ramshackle building in keeping with the vast majority of Korean rural architecture and my experiences in Namhae, but the rather smart metal gates we pulled up at suggested otherwise, and these were opened to reveal an entirely modern single-story house beyond, which in turn opened up to reveal a modest but functional three room dwelling comprising of a bedroom, kitchen/living area, and a bathroom.

Our friend, the owner, has a full-time job in Busan. I’d been told he grew vegetables here, but the variety of crops visible, along with the size of the plot of land – which even included a pond – made it evident that this was no mere side operation but a serious commitment. It seemed he was leading a double life as a farmer at the weekends.

Namhae hadn’t prepared me for this. The nearest road was a thin strip visible in the far distance, and even then it wasn’t well traversed. In-between the bird song it wasn’t just quiet, there was an actual absence of noise. I couldn’t remember the last time I’d experienced anything like it. It was breathtaking – and perhaps because Meniere’s Disease has left me with mild Hyperacusis, enormously relieving. People always seem surprised when they read of traders who give up their lives in the city to become farmers – moving from the frenetic pace of the city to the perceived tranquillity of a job which seems right at the other end of the career spectrum as far as one’s environment is concerned. While I’d always sympathised with the sentiment, at that moment I understand it perfectly. 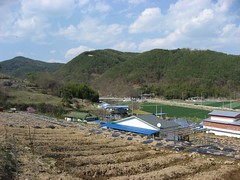 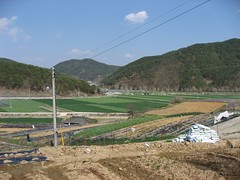 After a barbecue, to which every fly in Hapcheon County had been invited, the plan was for the group to go ‘night fishing’. It had been warm in the sun but as we’d eaten and dusk had fallen, the temperature had become surprisingly cold, promising to turn the experience not so much into a battle against the fish, as a battle against the elements. But once again language and cultural barriers highlighted the difference between my English understanding of the act of going out ‘fishing’ and the Korean definition. We drove out to a river near an isolated love hotel, getting sprayed for foot-and-mouth disease again on our way in and out, where nets were prepared on a low concrete bridge in very little light. Once prepared, the nets were tied to the bridge supports. And that was it – no rods, no braving the near freezing conditions, no waiting around in vain for hours – just drop your nets in and leave. Two hours later the nets were collected – two fish had been caught. 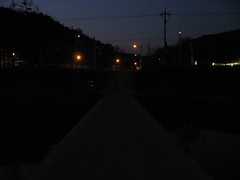 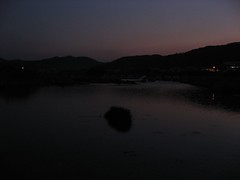 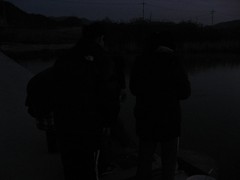 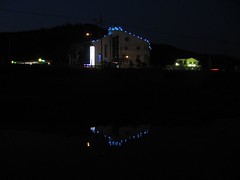 We were all up the next morning at 7am because we’d come here with a purpose of sorts – to help dig foundations for a new outbuilding and harvest some of the vegetables. An early mist hung in the valley but it wasn’t long before a surprisingly strong sun burnt it off. I also got burnt – I’d spent an hour clearing stones from the fields to be used around the pond, and while I put on sun-cream when I went in for breakfast, the damage had already been done. 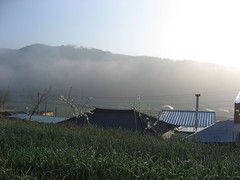 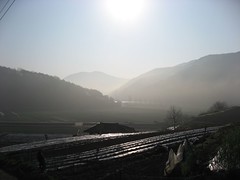 At 9am my image of the idyllic rural scene was somewhat shattered by the sound of a disembodied voice echoing around the valley. I realised later there were speakers on some of the telegraph poles, and the authorities weren’t afraid to use them. A foot-and-mouth warning was read out. It repeated every couple of hours, and at one point a car broadcasting a similar message even made its way down the valley. Now that I’ve worked out in the fields while loudspeakers broadcast government warnings I feel I’ve had a little taste of the North Korean experience. On the whole, it seems strange that such a potential invasion of privacy would be put up with, no matter what the ‘public good’ arguments are, but given that our apartment back in Busan has a similar loudspeaker which ‘important’ messages are broadcast through – with no way of turning it off – perhaps people here are conditioned to be used to disembodied voices of authority speaking to them in their private moments.

I suppose it’s not as though they are used to urge people to work harder in the fields – not that it would perhaps be needed – who needs Big Brother when you have your dead ancestors watching over you in the fields from their graves in the hills? 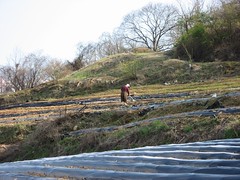 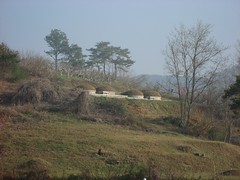 We completed collecting stones from the land and the ‘Oriental Fire-Bellied Toads’ (‘Bombina orientalis‘) now had a more interesting environment to live in. The toads, as their name suggests, have rather spectacular orange undersides to warn of their toxicity, but they weren’t easy subjects to photograph. 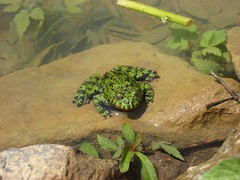 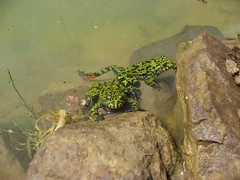 The foundations began to take shape, but digging was hard work as the ground was full of stones and rocks. The building was being referred to as a summer house, which appeared to make it a summer house for the summer house. There seemed to be a Russian doll thing going on here. From the haphazard nature of our work, I harboured a suspicion that in Korea, if you wake up one morning and decide to build a new building on your land you just go ahead and do it – there’s little if anything in the way of planning permission to resolve. Or at least, there didn’t seem to be anything other than an ad-hoc plan. 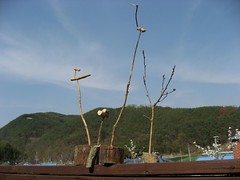 Later I helped harvest some vegetables before lunch, and in the afternoon sawed some wood – my wife wanted to make a traditional wooden object which is meant to usher in good harvests – it’s basically a wooden base with a small vertical branch connected to horizontal, vertical and then horizontal branch, all progressively smaller. The alleged effect is that of a bird perched on a branch.

We’d been on a tight schedule all weekend, in fact there was an actual schedule printed out in some detail, and our time was almost at an end. We left our brief rural life and returned to the city, where the ‘Meowi’/’머위’ vegetables (or Meogu/머구 as they are called in the Busan dialect) were a big hit with Korean Mother. Apparently they are really hard to find or buy in Busan because not many people eat it here, even though many people like Korean Mother are ultimately immigrants from more rural places. I’m told it tasted especially delicious. When I closed my eyes, I could still see dozens of black dots flying around. I can only imagine this place is mosquito hell in summer.

During the trip I seriously began to wonder how I was perceived by my Korean friends. My wife, who normally acts as my translator, was elsewhere most of the time, and unlike at social gatherings I found myself in situations where I needed to coordinate with others or follow instructions, but it was hard to do. I felt that if I were a Korean, I’d probably be regarded as having a rather low IQ, but then this is the reality of my Korean existence so perhaps for the purposes of defining my Korean life, I am thus mentally challenged. At one point I was asked if I knew how to use a spade. I don’t know how it is that the deeper I get into Korean life the more isolated I feel, and can only hope this is an inverse Bell-Curve of which I will one day find myself on the opposite, ascending side. I never expected my experiences to get worse as time went on, and that’s the surprise and disappointment.

I tried to work very hard to compensate, but I was sorry that between this and the tight schedule I never had the chance to leave the compound and walk around the area. Life in rural Korea is radically different to life in the cities, and I thought there must be much to discover. I also really needed that elusive perfect moment of tranquillity that was hinted at, and the faintest promise of some enlightenment it might carry with it, but instead it seemed we exported our city lives into the countryside, changed one form of work for another, and kept the same urban pace that is so much a part of our existence. 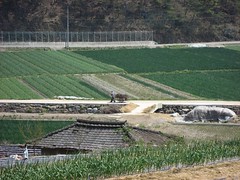 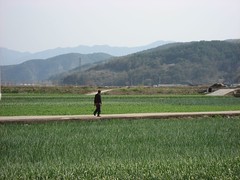