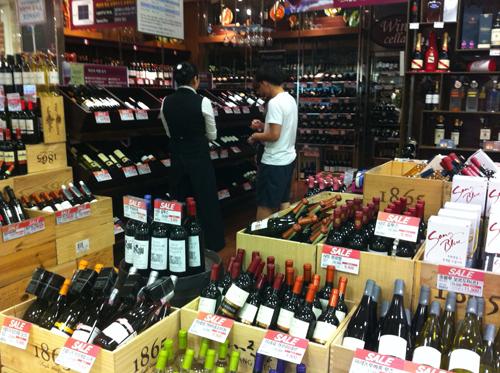 Would you like some cheese go with your wine?

Would you like some cheese go with your wine?
One of the expected benefits of the EU-Korea FTA that went into effect in July was that Korean wine enthusiasts would have greater access to pompous,  overrated European wines would be available at slightly less (grossly) overpriced prices, but apparently this hasn’t been happening as quickly as some would like. In a recent Yonhap feature, the finger is pointed at red tape and still complicated tax procedures that are confusing wine producers and prevents the Seoul elite-ish from sniffing and twirling their products. Personally, I do try to keep red wine as my most often consumed alcohol (although noticeably less during the hot summer months), even if my selection in Korea, and especially in Yeosu, is quite limited. That said, I am also very anti-snobbish wines which I feel a great number of European (especially French) products are. My tastes were developed back in Colorado among the dozens, if not hundreds, of low priced, quality Californian and Australian wines available. For that reason, even here in Korea, I could never justify European wines providing a worse drinking experience at a higher price. Back to the story, even after the FTA kinks has been worked out, it is unlikely that these prices will come down too much, as even though tariffs are eliminated, taxes and other fees remain. Likely reduced costs will be seen by the middlemen, but the best consumers can expect is an uptick in choices, especially from smaller producers.

What can eventually bring down prices, however, is increased volume and without a doubt Korea is growing as a wine drinking country. Next week, I hope to do a piece on the Korean wine industry for KBC Business Talk and a full blog post may go along with it.

On the bright side, they’ll likely be the fastest ones to get home

Today the IAFF World Athletic Championships will be wrapping up in Daegu. Unfortunately, of the six finals featured on the final day, none will have a Korean athlete participating. This cements what was a strong possibility before the events began, that Korea would become the third country in the past 25 years to host the Championships without winning a medal. Even the team’s sadly ambitious “10 in 10″ goal (top-ten finishes in ten events) came up woefully short with only a couple race-walkers hitting the mark. While this was not particularly surprising to me, given the lack of interest and development of track and field sports in Korea, what I have found interesting is how soundly negative the domestic press has been about the event. Outside of the event stories, nearly everything I have read about the games have been criticisms of the organizers, facilities and highlights of volunteer shortages, language problems and disorganization. While there have been a couple negative notes from the international press in Daegu, in general they and the athletes have seemed satisfied with the event. This is far from the picture the Korean press is presenting, so I wonder the reason behind this disconnect. Either way, I completely disagree that this events will provide any lessons for or give expectations to the (distant) upcoming Winter Games, which should be a well prepared event.

A GNP lawmaker recently reported numbers from the Ministry of Education showing that, according to averages from their annual audit of student mental health, around 13% of Korean school students may require in-depth mental health examinations. Given the high pressure, constant studying and complete lack of social education that Korean students deal with, I personally believe that number to be short by about 87% or so. During my time as a public high school teacher, I met a number of great kids, but none of them I would consider to be particularly mentally well-adjusted (even by teenager standards), but this was no surprise given their environment. Unfortunately, even when the system likely causing a lot of the issues determines the kids may need some help, it seems the parents aren’t too strongly listening. According to the same data, annually only half or so of the children recommended for further mental evaluation receive it due to consent being needed from parents. As noted briefly in the article, this could be indicative of the stigma that exists in Korea to mental health problems and negative perceptions of treatment.

Last up, perhaps able to give a little shot up to your personal mental health, here’s a new Kpop song I find myself enjoying.

It’s aptly titled “Good Good Time” marking the return of 코요태 (Koyote, pronounced Koh-Yo-Teh rather than my preferred Colorado style of Kigh-Yo-Tee) and is just one of those unnecessarily happy, high energy songs that I really enjoy from time to time. While such songs have been the groups usual since their debut, this time around it seems especially appropriate given member 빽가’s return from being diagnosed with a brain tumor two years ago.

Stay tuned the coming week, I have some ideas in the pot and hopefully something will turn out. Till then, have a good time (a g-g-good time).