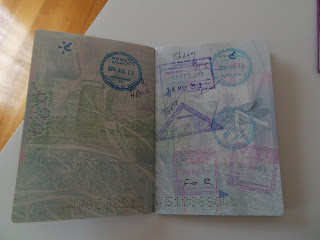 Let’s get stuck in with the first real post back.  Now I have to admit to entertaining the thought of returning to Korea on a number of occasions, my reasons for not doing so I won’t bore you with again as I have already touched on them in my post, “The Reasons I left Korea”.  All I can say was that the temptation was great.  On each occasion after I left (I did so before, to live back in England for a year), it soon became apparent to me that I had a pretty great time in Korea.

Let’s get stuck in with the first real post back.  Now I have to admit to entertaining the thought of returning to Korea on a number of occasions, my reasons for not doing so I won’t bore you with again as I have already touched on them in my post, “The Reasons I left Korea”.  All I can say was that the temptation was great.  On each occasion after I left (I did so before, to live back in England for a year), it soon became apparent to me that I had a pretty great time in Korea.

I can’t say that without my wife that I would have returned, but my wife certainly was quite steadfast against returning, much more so than me.  This seemed odd to me as she has clearly missed home very much and moans quite regularly about the many nuisances of living in a Western country.  She is also much more attached to family than me, as are they attached to her.  At times, adjusting to life in Australia, along with the lack of money (due to the international student fees we have had to pay), has been a real burden on her.

We have both worked exceptionally hard and only recently have we began to see the fruits of our labours.  But trust me, it’s been tough.  Every time we have tried to get some money together, the cost of living bites, every time we sort anything out – like internet, visas, finding a house, going away, etc – we have to work through mountains of bureaucracy, bad service, and unnecessary rules, regulations and charges.

So what’s going on?  In my wife’s eyes, and in mine, Korea is a much nicer place to live. Everything is organised better, life is more convenient, less stressful, we go out more often, and I have more holiday.  For my wife, all her friends and family are there too.  So why is she so against returning?

The answer lies in how the people she knows treat her; family, work colleagues, friends, and acquaintances.  Societal pressure and expectations in Korea are astoundingly strong and I have been quick to criticise how Koreans treat one another before on this blog based on quite inflexible views on life and the duties that are expected of each other. Us foreigners who have experienced Korea often bemoan how we are treated by Koreans, but like I have said time and time again on this blog, we really don’t know the half of it. Koreans themselves get treated far worse by other Koreans than we ever are.  We can play the foreigner card and get away with an awful amount.

Korean working culture is often cited as a big reason why people want to leave the country, but my wife would often comment that she didn’t mind working so hard if the people she was working with could treat her like more of an individual and with a bit of empathy and understanding.

When you think about it, the despair many Koreans feel surrounding work and education is rooted in how others treat them and what’s expected of them.  It is the pressure parents put on their kids to learn – which comes from the pressure society puts on them – that makes education the way it is and so unbearable for students, for example.  The inflexibility of the working environment and the long hours is also something more controlled by society and the perceptions of work and duty than by the government or business (although both take advantage of it, I’m sure).

It’s a shame, because I reckon that if my wife were to make a list of pro’s and con’s about Korea and Australia, she would have a long list of pro’s for Korea and only one or two con’s.  It’s just that these one or two are so powerful, it is out of the question for her to entertain returning.  She is currently visiting friends and family in chilly Korea right now, and although it has obviously been nice to go back home, after less than a week away, she can understand why she left, and yearns for a return to Melbourne (despite having more than a few complaints about living there).

It’s a sad state of affairs in what would otherwise be a fine country to live in.  Not only do many Koreans not want to return to Korea, but an alarming amount want to leave. There is a real sensation that many Koreans are truly fed up with the direction the country is taking, they just don’t know how to change things and hence simply leave it (one way or another).

A couple of weeks ago, I got a haircut and coincidentally it was a Korean lady who did it and she was very open and talkative – as well as being able to do a Western haircut. (Funnily enough, I reckon most of my haircuts have been done by Koreans since coming to Melbourne.  This is because it was one of the easiest avenues to obtaining a visa some years ago).  She commented on travelling last year; she had travelled for about 5 months to South East Asia, Japan, and back home to Korea in two, two week stints.  After her first visit to Korea for about 8 years she remarked, “I planned on staying for a month, but after 2 weeks I couldn’t take it anymore.  My mum nagged and nagged, you know, and the rest of my family told me, ‘why can’t you do this, why can’t you do that'”.  I couldn’t take it so I went to Japan for two weeks before going back to Korea for one more week and then returning to Melbourne.”

I have met a number of Koreans in Melbourne through my wife, and it is much the same story for them.  They have all been a rather different breed to the Koreans I met in Korea.  None appear to be living the dream in Australia and really enjoying the place, but none want to go home. They are far more individual also, although coming from a culture that values a rather close-knit group and dependency on others, none seem particularly happy.  My own take on their situation is that they would love to return to Korea, but all want to keep the ability to be themselves and make their own decisions without being pressured into a way of living that is not for them.  This is all impossible in Korea.

Perhaps it is just the nostalgia talking, but what a shame this all is because when I look back at my time there, it is a country that has so much to like about it.