After an initial flurry of motivation for lab work, I’ve since found the inevitable slow-down that occurs approximately 3 months after you start. The main ideas of science are always exciting to me, however the daily routine of mindless protocols is sure to wither away even the most ardent enthusiast. But I was expecting this to happen anyway. One thing I’ve learned in life thus far is that in order to get where you want, you often have to do a lot of things that you’d rather not do.

After an initial flurry of motivation for lab work, I’ve since found the inevitable slow-down that occurs approximately 3 months after you start. The main ideas of science are always exciting to me, however the daily routine of mindless protocols is sure to wither away even the most ardent enthusiast. But I was expecting this to happen anyway. One thing I’ve learned in life thus far is that in order to get where you want, you often have to do a lot of things that you’d rather not do. 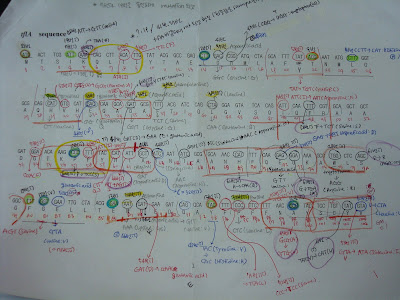 This paper in the photo above is Se-Kyung’s. I saw it on her desk and decided to snap a photo of it to share. It’s a DNA sequence that has been heavily annotated to a point where it resembles something rather artistic. DNA is the biological code for all living things, and like most forms of code, it looks like jibberish when you see it for the first time. However, with a modest amount of experience, the code will reveal all sorts of interesting information if you know what you’re looking for. Once you know what the code means, you can change it for better or worse. This is what biotechnology is all about. 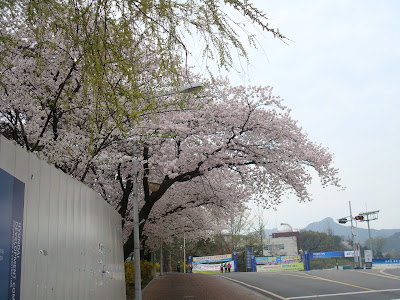 Spring is blooming in staggered outbursts, like some sort of fireworks show going on in slow motion. One species of tree will bloom all of a sudden during a week, and then as those blossoms begin to fade away, a different species will flower.
I guess the reason why trees do this is because there aren’t enough insects to pollinate all of the trees at the same time. 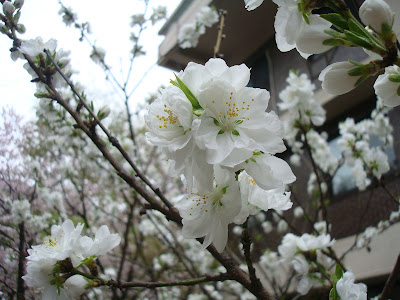 Yowie recommended I buy a dSLR to use for the blog. While it would certainly tidy up the visual quagmire that Lee’s Korea Blog has become, I long ago decided that higher end cameras are too bulky to carry around. Most of the photos I take are on the move, so I need something small that fits into my pocket. But my current Sony Cybershot W90 is still pretty good. It only cost me $200 and I’ve dropped it on numerous occasions. The macro shot in the photo above is a rather befitting example of its optical prowess, I contend. 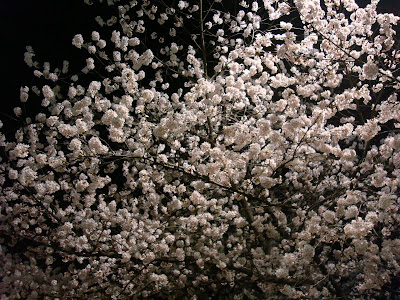 As for the blossoms, Chen Jing and I usually only get to see them in the early mornings or late at night. We both live in the dormitories, so often on the way home Chen Jing will advise me to take a photo or two. But that will often lead me into a lengthy explanation on why things at night look much better to us than on camera. The image editing software in our minds is more finely tuned. 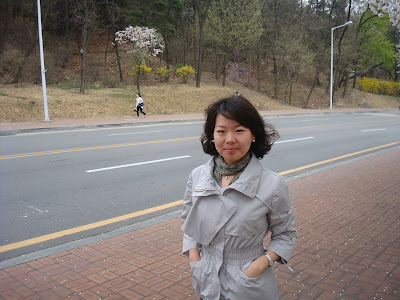 Hey look, it’s Heather. Over the past two weeks she’s visited twice, which is pretty good seeing as I’ve only been to Busan once since I arrived. 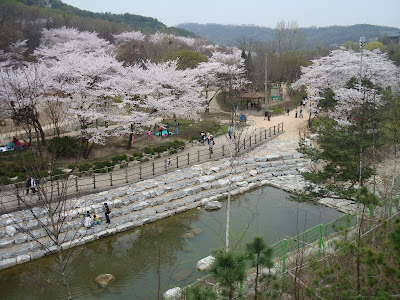 The Seoul National University campus is surrounded by public parklands and hiking trails. I’d have to say that it’s the best looking university in Korea that I’ve seen. On the weekends, the public buses constantly unload a steady stream of city dwellers eager for a dose of nature. 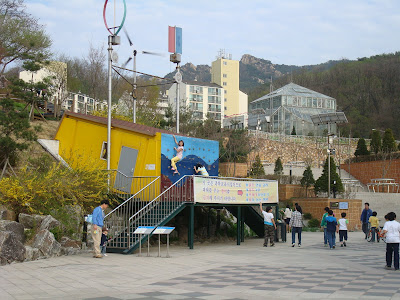 Near the BK dormitory is Seoul Science Park. It reminds me a little of the old Investigator Science and Technology Centre in Adelaide, that I was crazy about in my youth. I wish they had more of these sorts of places around. Basically they’re family friendly places with exhibits designed to entertain kids and foster an interest in science. 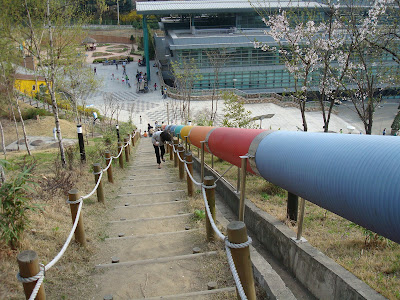 This long tube going down the hill is an echo tunnel. If you stick your head in the end and talk, you can hear your echo when it bounces back. It reminds me of that funny word ‘echolalia’ which means the constant repetition of phrases, usually done by kids as a way of processing thoughts or sometimes just for fun.

If someone is nagging you in the lab or workplace, why not try a little sarcastic echolalia to help lighten the mood? 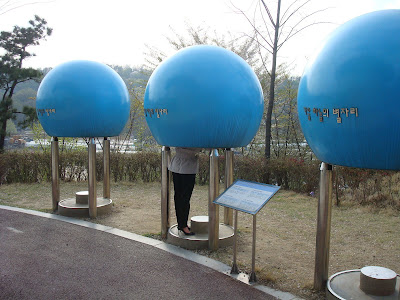 In the photo above, Heather is investigating the contents of a sky dome. If you put your head into one of these, it’s all dark inside but there are little holes that let spots of light in. The holes are cut where the locations of the stars are at night, so you can see a map of the night sky. 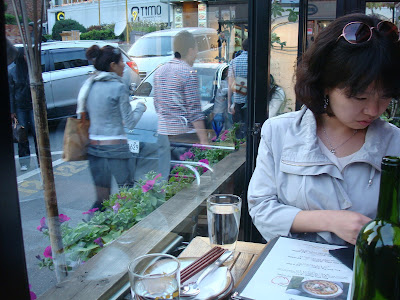 For dinner we went out to Itaewon, which is the foreigner district of Seoul. Here you’ll find a nice variety of foreign restaurants and bars including Australian, African and Middle Eastern. We ate at the MyThai restaurant which is very close to the Hard Rock Cafe. 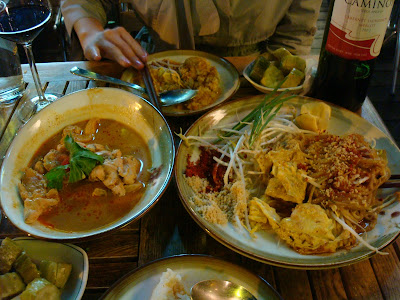 The food was fairly good, although nothing spectacular. We had a red chicken curry and noodles which came out a little late, but the service from the waitering staff was excellent. We had a nice bottle of Chilean wine to wash it all down, because they had sold out of the Australian Wyndham’s. Chilean wine is cheap in Korea, because there’s an FTA between the two countries.
After that we went to Syd and Mel’s Australian restaurant and had some wedges with sour cream and sweet chilli sauce. I used to eat that a lot in Australia, not knowing that it was an Australian dish. 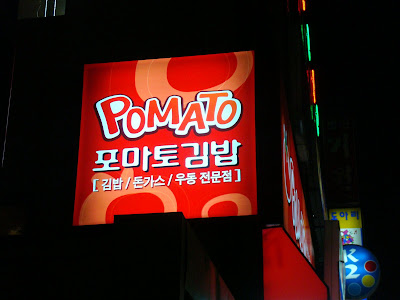 Sometimes I’ll find places with funny English names in Korea, and when I do I’ll try to remember to take a photo of them for you. The name of this kimbap restaurant in Nakseongdae is rather fun. I think it’s supposed to be a mixture of potato and tomato. 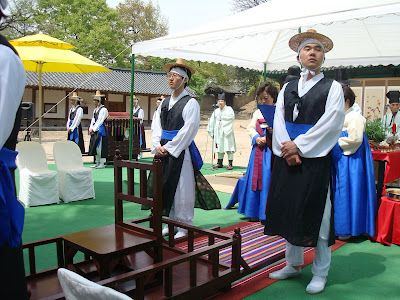 One of Heather’s friends got married on Sunday, so we went out to SungKyunKwang University to attend. The bride and groom opted to have a traditional Korean wedding, which are still very popular here. 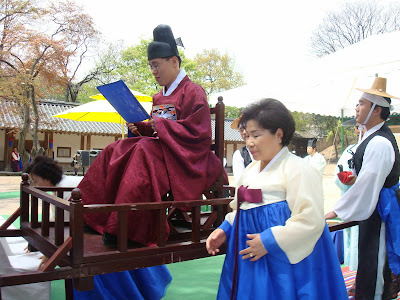 The groom gets carried by helpers, and there’s a different platform for the bride. The ceremony includes some announcements as well as bowing, washing hands and drinking from a ceremonial cup. 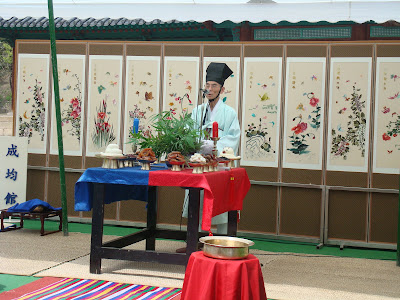 This guy is part of the wedding ceremony and his job is to read out the special marriage announcement. I think it was all in archaic Korean, which is why I couldn’t understand any of it. 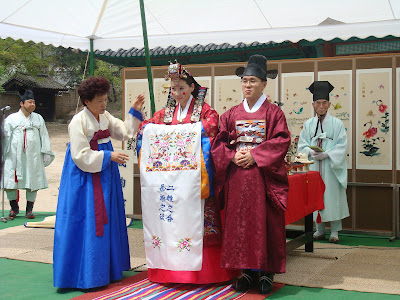 Here are the bride and groom looking very special. The bride actually recommended Heather to work at CDI a long time ago, which led to her employment. So I guess if that didn’t happen, we wouldn’t have met and wouldn’t be together now. It’s kind of funny when you think about things like that. 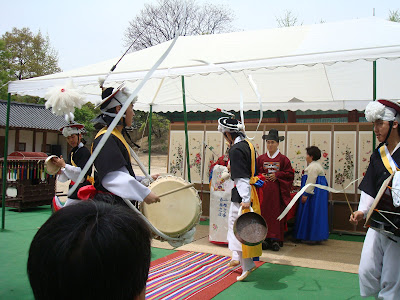 Next was a traditional samul-nori drum and dance performance. The hats have rods and long ribbons attached to them, which are spun around with a good amount of skill. 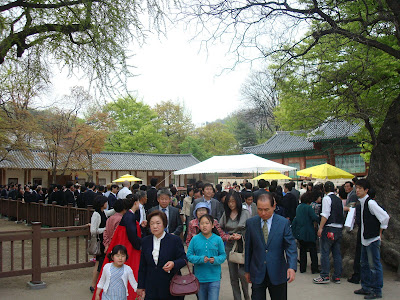 The weather was warm and the ceremony was especially nice under the large trees. I wouldn’t mind having something similar for our wedding. 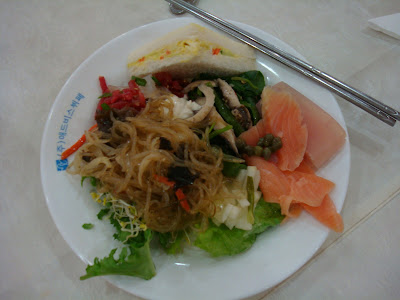 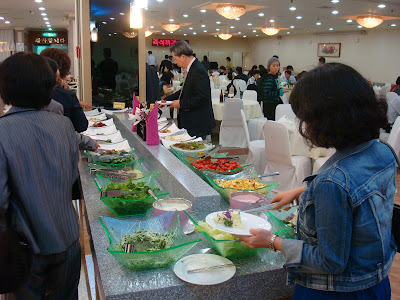 Then came the buffet lunch. I’ve been to a few weddings in my time, and as long as there’s good food and alcohol, it’s a good wedding. 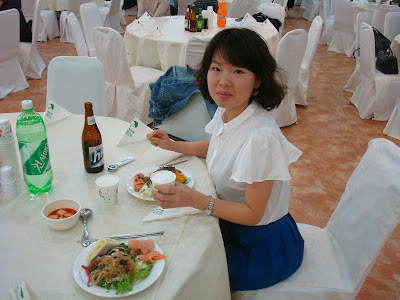 Here’s Heather enjoying the refreshments. We’re going to get married sometime later this year, but haven’t set the date yet. Weddings are too expensive. 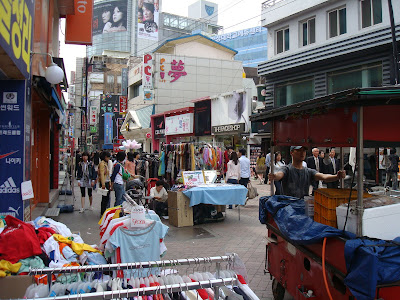 After that we met Heather’s brother in the Hyehwa district which is somewhat similar to PNU in Busan. We had a bottle of Yellowtail Shiraz with a mozarella salad at a cafe, which was nice. My Korean has improved a very slight amount, so now I’m able to butt into Heather and her brother’s conversations more frequently. The presence of wine seems to increase the frequency of such interruptions. 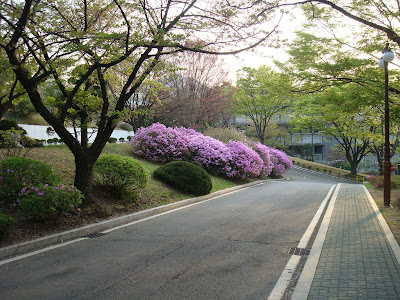 Well I’m happy that the weather is warming up. I’ve also decided to spend a little less time in the lab and do other things on some nights. I think that if I spend way too much time doing experiments, it’ll be less productive than doing all sorts of different things. Last week I went to Toastmasters, which is a speech presentation club. Hopefully I’ll go again tomorrow night and get some photos for you.