A quick translation on KQCF’s press release on the reversal of the prohibition of this year’s pride parade.

The Korea Queer Culture Festival’s parade will open according to plans on Sunday, June 28th.

A quick translation on KQCF’s press release on the reversal of the prohibition of this year’s pride parade.
The Korea Queer Culture Festival’s parade will open according to plans on Sunday, June 28th. 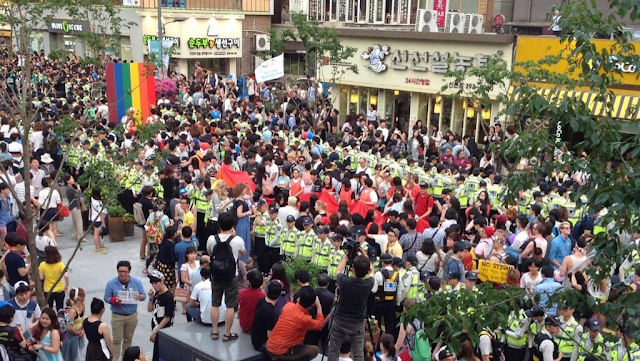 On the 16th of June, the 13th court of the Seoul Administrative Court accepted the application of the Queer Culture Festival Organization Committee ruling, to, in effect, halt the notice of a prohibition of an outdoor assembly by Seoul’s Commissioner of the Seoul Metropolitan Police Agency. According to the court’s ruling, the notice of prohibition of the KQCF’s parade is no longer in effect, making the parade legally permissible.
The court stated that “By law, forbidding an assembly is only allowed in the case where a direct threat to public law and order is clearly in existence” and that “Rather than restricting the assembly’s freedom through prohibition, there are other ways. Forbidding an assembly is the last choice after considering every other possible means. ” Furthermore, the court added that “the Queer Culture Festival has taken place yearly from 2000 through 2014, and in consideration of the fact that the Festival Committee has been planning the queer parade for quite some time, upholding the notice to restrict the parade would be damaging toward the Festival Organization Committee in a way that would be difficult to recover from.”
The Queer Culture Festival’s Chairman Myeong Jin Kang stated, “This court’s decision in relation to the police’s unjust notice prohibiting assembly is important. Within a democratic country, built on civil society, the guarantee that society can use their voice has a deep meaning.” Furthermore, he stated that he was “grateful for the decision that the Queer Culture Festival’s parade can continue into its 15 years, legally working as a communication method in society.”
Representative for this lawsuit Chairwoman of the Committee for the Human Rights of Sexual Minorities and lawyer Suhyeon Chang stated “The fact that permits are needed for assembly and demonstration is in violation of Constitutional Law while prior prohibition of assembly and demonstration is severely limited by the Law on Assembly and Demonstration. This is a decision that means that sexual minorities have the freedom to assembly and are treated with equal rights.”
Finally, a total of 112 human rights, civil society, religious groups and political parties of the Queer Culture Festival Board of Directors stated that “The Queer Culture Festival is a place for LGBTQIA individuals to stand together, express themselves, and stand against discrimination, hatred, and prejudices as it relates to queer individuals. The Queer Parade is an event with deep meaning as a place where sexual minorities can march with pride.”  They added “As human rights, civil society, and political parties, we welcome this decision of the court, and we will make our best effort to work together so participants can enjoy a peaceful parade as planned.”