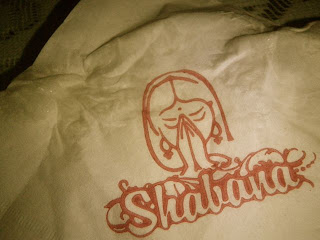 Like most humans, I love Indian food. My list of $10 Indian buffet indulgences is impressive and my wife and I have plated many tables in attempts to recreate curries we’ve enjoyed. It’s a different experience to order specific Indian dishes especially if you have a chef who has intuitive abilities.

Like most humans, I love Indian food. My list of $10 Indian buffet indulgences is impressive and my wife and I have plated many tables in attempts to recreate curries we’ve enjoyed. It’s a different experience to order specific Indian dishes especially if you have a chef who has intuitive abilities.

Welcome to Shabana. I scampered up the uninviting staircase to the second floor to inquire about the menu. Will it be too much? Who knows, sometimes these off the beaten track places are crazy expensive. No one was there to take my question except an old Indian man who was sitting at an empty table looking at me like I was lost. A pair of men were practicing their English on a table beyond him. I waved to the solo man. Nothing. I took this as an invitation to help myself to a stack of thick and professional looking menus that lay at the host stand. The menu had gold-rimmed trim. Not a good sign in regard to affordability… A brisk flip tour revealed the prices to be moderate to high (by my standards). 10,000-15,000won per plate with set options starting at 41,000won for two. 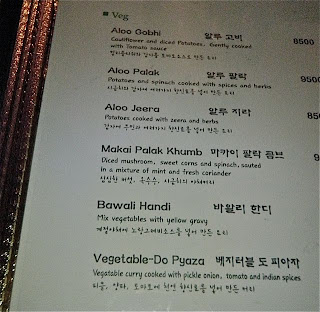 The menu is extensive, and may be a bit overwhelming to someone new to Indian cuisine, however, the staff did a decent job explaining each dish in English and Korean. I gathered my wife who was guarding our same-same bikes and we ventured forthwith into Shabana with glee. We sat next to a window, which provided for us a view of a wonderful bone-white brick, façade sporting near 76 AC units. Bear noticed that one AC unit had fallen out of its mounting platform and remounted itself to a unit just south of its own, suggesting the AC unit had a change of heart.

As veggies, we often find awesome sounding/looking dishes that have some form of meat in it. “Gee, well this ______ sounds reaaaaly good, but do you think the chef could make it without meat.” Some places get that shit, others could care less and coodos to both. More coodos for those who get that shit. Shabana’s gets that shit and then some. They even offered to remove unliked spices from our dishes (I only have one thing that would fit this category and it’s coriander-or if your from the Americas, Cilantro… vile, vile weed). As luck would have it one of the dishes we decided to get had cilantro/coriander in it and without hesitating our waitress darted to the kitchen to ask the chief what could be done. Apparently it wasn’t the leaf but the coriander seed who was the suspect in question. We opted to keep it in. I would later be thankful for this decision. Our waitress spoke good English, she knew her dishes like the back of her hand and she wasn’t a hoverer.

We ordered the “set for two.” But a frankenstiened version that encompassed two veggie dishes and a seafood dish (for an extra 4,000won). Samosa to start then Paneer Korma (the yellow dish), Makai Palak Khumb (Green), and Prawn Masala (red). Indian rice and nan bread to accompany. For desert was a sweet Gulab Juman. 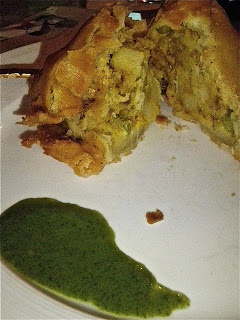 The Samosa’s had what seemed to be homemade crust (probably composed of lard(we looked the other way)). Nuts. These were NUTZ on. It was like the samosa’s set in motion my total acceptance for anything to come. This person back in kitchen was no longer a stranger who was cooking us food. He was like a family member who cared for us. The Samosas were served with two sauces, which couldn’t have been more different. One was a dollop of Heinz ketchup, the other was a delicately prepared mint/sesame leaf sauce. The choice to use sesame leaf in this classic Indian sauce was clearly a sign of cultural infusion, which scores points in my book. Local ingredients are good ingredients. 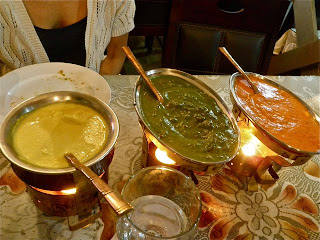 The timing of the dishes was perfect. We had time to finish our samosas, take in some WWF “Smackdown” on the plasma screen, and reflect briefly about our week’s accomplishments when the entrees came. The presentation was outstanding. Each dish had its own unique burner-platter, which was quite functional in keeping the food warm the whole evening. The colors of the sauces were deep and robust, like oil paints prepared for some colossal canvas that dwelled in my stomach. The lead the Samosa’s gave us turned out to be honest through and through.

The Paneer Korma (the yellow one) had a solid buttery backbone with hints of creamed corn. Its texture also eluted to the presence of corn. It had generous hunks of fresh white paneer cheese, which are basically large assemblages of cottage cheese. 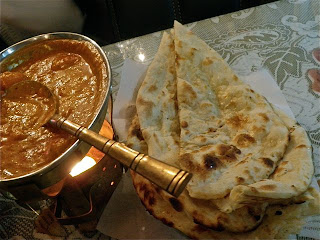 The garlic nan used for dipping propelled this dish to a place untouchable.

The Makai Palak Khumb (green) was solid. This is the dish that had the coriander babies. Mind you, seeds are generally more palatable then their more mature leafy counter parts, and this case was no exception. I actually approved of their role in the dish. The seeds tasted rash, yet they fit (sort of like having that douche-bag coworker who is really good a pitching join your softball team.)

I have always thought that when you add shrimp to something, you’re sort of cheating. Shrimp, almost always, tastes good in stuff. People leave saying “Jeez, weren’t those shrimp like sooo gud??” What about the SAUCE?? SCREW THE SHRIMP!! I just wanted to try their masala but vegetable masala is blasphemous, which left prawns. And I tell you, their masala kicks ASS. It’s like the masala has its own brain and it was telling my brain that it was – awesome. The shrimp were good too. 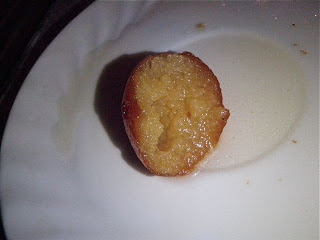 Sweet desert Gulab Juman. Nice touch. Literally, a touch. One, little ping-pong ball sized treat. Had I had the option to eat more of these Jum-Jums, I would have turned it down. I was stuffed like a cuttlefish in Jagalchi.

49,500won for our experience at Shabana. Worth it? You bet your Che socks it is!! The word on the street, or so I’ve been told, is that Shabana is a med-grade food establishment. I bet to differ. Fantastic food but your going to pay a bit for it. I’ll be going back.

To get to Shabana, head out of the PNU exit #3 and continue straight all the way through the shopping block till you get to the 1st main street. Take a right and then the next major left, which is the main drag leading up to the PNU Gate. After Pizza Hut and before Baskin Robbins you will find a narrow passageway leading to Shabana, which will be on your right. Climb the wary staircase one flight and you’re there.