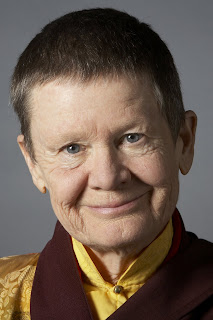 I love this woman.
While I have never embraced the label of “Buddhist,” I have been interested in Buddhism for a lot of years. Well before I caught the Korean bug at Alfred University, I caught the Buddhism bug at Brookdale Community College. I really bit into it when I was at Alfred and one of my favorite teachers, Ben Howard, had a number of Buddhist-related classes offered, like Contemplative Writing, and had Sunday evening public meditations at the theater. No, I did not attend many of these. I was a lazy Buddhist as well as a lazy English major.
By November 2005 I was about two-and-a-half years out of college and did not have a regular meditation schedule. I still don’t, though I am aware of this and occasionally fall into a good groove.
By Nov. 15, 2005, I think I was very much outside of a groove when it came to meditation, to being with myself at that moment, as opposed to worrying so much about whether R. was missing me back home, whether the kids in class would accept me, whether I would accept them, whether that girl at Zio Ricco could be just what I needed to make me want to stay in South Korea.
Pema Chodron, that short-haired woman pictured above, is a Tibetan Buddhist nun I first discovered watching an interview she participated in with Bill Moyers on PBS. What I found so refreshing about her is that she is not perfect and never claims to be. Of a modern ilk of western teachers, she can relate to the lay practitioner as well as the severe Buddhist. In her book, “Getting Unstuck,” she refers to those times in our lives when “the shit hits the fan.” Dr. Howard would not approve.
In “Getting Unstuck,” she is talking about something called “shenpa,” or the hooked feeling we have in our minds, for good or ill. When something is just too juicy to not hold onto, a sexual desire for someone at work, the anger you felt when the guy in the Porsche on the highway cut you off and didn’t even have the courtesy to use his turn signal, the prick. Things can bother us or make us happy, but when our minds just can’t seem to let them go, can’t seem to free us from this non-existent netherworld between our ears inhabited by our lusts, loves and hates, we deny ourselves everything that is available to us in our right nows, so much so a lot of us wouldn’t even be able to tell you if it was cloudy or sunny this morning on the way to work or even what we ate for dinner last night.
I think about 90 percent of my time spent in Jinju in 2005 was spent under a massive cloud of shenpa. The other 10 percent was when I spoke warmly with new friends like The Boss and Bettina from Australia, when I opened the book and audio book on learning Korean and actually could identify what symbols sounded like what on road signs after only an hour of study, when I wrapped the meat and bean paste inside a delicious sesame leaf and chewed deeply, sighing at the combination of unique and wonderful flavors on my palette, right before shenpa came back and I remembered I was leaving Korea in less than a week and I still had not found a replacement teacher for Oh Sung Sik English Club.
It’s not the shenpa that is the problem. It’s not that we have bad thoughts, or that we have many bad thoughts. And having nothing but good thoughts wouldn’t work either; how could we identify one without the balance of the other? It’s when that balance no longer exists, and we just shut down inside. And who knows if those on the outside perceive this shut down and politely ignore it? Maybe they do not notice it at all? Maybe they all are having their own shut downs at the very same moment? What if we all could identify this and try to wake up? Maybe not completely, such a lofty, unattainable goal (I promise to make a million dollars by noon, I promise to attain enlightenment and float into the ether).
I listen to Pema Chodron’s words (I have the audio book version, you should check out Audible.com, what a great program!) and I feel better, not only because it always feels nice to know you’re not alone, but also because I know that in so listening and understanding, I am making progress, even when shenpa for ill comes up, as it will. It always does. The point is not to destroy it, it is to be open to it, to everything. Close up to it, and eventually you close up to everything.
Perhaps that was the biggest hurdle I could not seem to rise above in 2005. But, those mistakes and memories are what have made me who I am today and are part of the makeup of the person who is heading back across the world in less than two months.