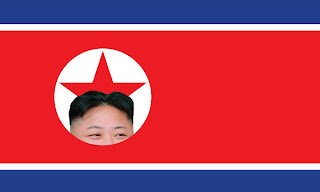 The short and obvious answer to this question is of course not, they are not worthy of any respect at all.  Their actions are ridiculous, dangerous, and the regime are more interested in respect than the well-being of their people.  Therefore we should hold our ground and give them nothing, right?

The short and obvious answer to this question is of course not, they are not worthy of any respect at all.  Their actions are ridiculous, dangerous, and the regime are more interested in respect than the well-being of their people.  Therefore we should hold our ground and give them nothing, right?

The thing is though, after reading an article about the North Korea issue from the Huffington Post, I was given pause to think about whether sticking to our principles is the right way forward and if we could all do with thinking about the problem from another angle.   The article is fairly correct in a few ways (Note: before I get accusations of supporting the entirety of this article and being anti-american, I should just say that I do not believe the US is the cause of most of the world’s problems, but I do think they try and sort everything out when it is perhaps beyond their ability to do so) but I am going to focus on one aspect in particular because I have written so much about the subject on this blog, summed-up by this line:

For anyone who has spent any time living in South Korea, this one line should be blindingly obvious when you think about it.  I have written on this blog, perhaps ad nauseam, about the role respect culture plays in every day life in South Korea and how those of higher status want your respect and compliance.  They are not after a debate, conflict, or finding the truth about things that even they would be better off knowing a bit about, they want you to conform to their wishes and show respect, this is of prime importance.

If showing respect and conforming means telling some of the most transparent lies possible and simply placating them then that is fine.  I have found that South Koreans who believe they are of higher status will accept even the most hollow of shows of respect to avoid any conflict.  This is especially true when dealing with the older generation who, as I mentioned over at Asiapundits, are starkly different to the younger generation and share far more in common with those in North Korea.

If any country in the world must be suffering from a bout of bruised pride then North Korea must surely be one the the best candidates for it.  For those in the country that know the situation in the South and the economic success of the USA, it must grate like nails on a chalk board.  The US have respect, the South has it too, and the North has none, it is a joke, a crazy crackpot regime, stuck in the past in more ways than one and is fit to be made fun of time and time again.  What is the only thing they have to get the rest of the world to take them seriously?  The potential for a nuclear bomb, and it uses the threat of it frequently in order to gain some respect and it works.  Why would they want to give that up?  War would be the last thing they would want to do, because as weird and crazy as the North is, they are not suicidal.  However, they want to be noticed and recognised as a player on the world scene and the sabre-rattling achieves this nicely.

I think that for a Western mindset it is sometimes positively skin-crawling to bow down and give respect to those who you think don’t deserve it.  An American friend of mine from a few years ago would never do it to anyone in Korea or when he lived in Japan, and in principle at least, I kind of agree with him.  To me, when I think about it too much, bowing is offensive in more ways than one. As much as anything else, you are being dishonest by showing respect when you don’t really believe it (this happens on some occasions) and to me this seems even less respectful.  The moral value of equality also appears to be compromised in many of the situations I find myself bowing in.

That matters not on the Korean peninsula, many South Koreans and the North Korean regime don’t give a damn if things aren’t fair, aren’t honest, or whether your pride is compromised and they certainly don’t give a damn about logic and moral principles.  What is right is what the higher status person says is right, plain and simple.  If you have ever wondered why Korean people appear to have some strange logic sometimes, it is precisely because of this.  Questioning the status quo does not come naturally and when an outsider or someone younger points out any problems or argues against this, they are not credited with knowing anything as they are not worthy of high status and therefore respect.  The old ways change in South Korea only when they are shown to be unprofitable or are embarrassing to the people as a whole.

What to do then with North Korea?  Placate them; do the same as all of us do who live in South Korea and want an easy ride, suck up to them a little, tell them exactly what they want to hear and don’t believe any of it.  We don’t have to be clever, we don’t even need to really back up what we say with any meaningful actions, we just need to make a bit of a show to save the face of the North Korean regime and Kim Jong Un.  The question is, can the world do this with North Korea and should we do this with North Korea?  If the answer to both questions is no, then surely it is wrong for anyone to do it with the elders of the South, but we do it everyday nonetheless under the name of getting by in the world.

In principle, I am totally with those on the right of the argument, we are in the right, our values trump those of North Korea and they are the ones who need to start acting responsibly and change their ways.  But in practice, I am on the left, but only out of a sense of the reality of the difficulty of the situation. The US and its allies are not big enough to benevolently change the whole world, we learned this the hard way in Iraq and Afghanistan.  Again, in principle, it is a good thing to rid the world of Saddam Hussain, the Taliban, and Al Qaeda but changing the hearts, minds, and culture embedded in people through thousands of years of history is beyond us all at this moment in time and is largely a futile exercise.

Standing up for Western principles is something we should never be ashamed to do within our own countries and even promoting them to others through dialogue is not a bad idea, but we cannot really hope to force the issue effectively away from home, as much as we would love to show the whole world the way forward (and I genuinely believe that the Western world is the most enlightened at this period of time, but that is not to say it is perfect).  Some radical elements of the Muslim world live among us in our countries and in Europe increasing Muslim populations – many with wholly differing values – are coming head to head with Western principles.  We must hold firm to this challenge and assert our belief that personal freedom, freedom of speech, reasoned argument, equality, and human rights for all will never be suppressed and if anyone doesn’t like this they are more than welcome to go to a country without any of them and see how they like living there.

I would love to see the North Korean regime get its just desserts, it is mad and causes untold suffering among its own people.  But it is difficult to help people who don’t want to be helped and if in the process of pitting our values against theirs it causes the deaths of possibly hundreds and thousands of people, I think I might be able to swallow my pride and placate them a little, pretty much exactly like I do every day in South Korea to live an easier life.  The thing that really makes me unsure, however, is standing-by all these years has undoubtedly caused the deaths of possibly millions of North Koreans.  This causes a genuine moral dilemma.  Would it in fact be worth risking the destruction of a city like Seoul or Tokyo in order to save potentially millions of North Koreans now and in the future?  Maybe it is easy to understand why the world has not reached a satisfactory solution to the problem and the stalemate will probably continue for some time yet.