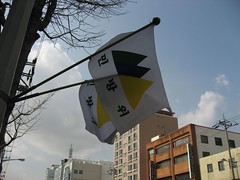 There is a civil defence drill here around the 15th of every month. The authorities put out flags a day or two beforehand to remind people. Now that the puppet regime in North Korea is threatening to attack South Korea again – in the past it has threatened to turn it into a sea of fire amongst other things, the drills take on a slightly more ominous feel.

There is a civil defence drill here around the 15th of every month. The authorities put out flags a day or two beforehand to remind people. Now that the puppet regime in North Korea is threatening to attack South Korea again – in the past it has threatened to turn it into a sea of fire amongst other things, the drills take on a slightly more ominous feel.

Sometimes I don’t hear the sirens – it depends where I am. If fact, it’s a given that if I’m in the subway or even in a store I won’t know anything about it. One person told me that she never hears it in her school where she works, and I never used to hear it in my old apartment which seemed to be positioned in a place where the warning coverage wasn’t very good. One would hope that because of South Korea’s love of technology, in the event of a real threat in addition to sounding the sirens the Government would have a system in place to text everyone, but I’m not sure that they do.

There is no such danger of not hearing the sirens in the apartment I live in now. And because it overlooks the main road into the centre of the city, every month I watch the entertainment unfold as the sirens sound and civil defence ajummas march into the middle of the lanes and, armed with little more than a whistle and looks that could turn flesh to stone, attempt to cajole drivers into pulling over to the side of the road. This almost always works, because they have to, but as you might expect, for some motorists the challenge is to get as far as possible before they dare not go further. I’ve seen cars speed past the ajummas on occasion well into the drill, soliciting the dirtiest of looks from them undiluted by my high vantage point. I’m not entirely convinced that if the sirens ever sound in anger drivers are going to be quite so well behaved and pull into the side of the road to possibly die, when their gut instinct is to get home to their families as quickly as possible.

Last month once the sirens had stopped I noticed something new. It was incredibly quiet. So quiet in fact, that I could hear birds singing. That was practically a new experience in Busan, where wildlife is largely confined to the mountains. As birdsong echoed through the valley we live in, it struck me that this must have been a beautiful place once before someone dropped a city on it.

This month there was something new again. The sirens were different. They seemed to have changed from the air-raid type sound familiar from the Second World and Cold Wars, into something more akin to a police siren, with a different pitch and a more rapid cycle. I was a little disappointed – I felt it lacked the menace of the Soviet attack warnings I grew up with, but later it transpired it was actually a natural disaster drill, and the sirens were for tsunamis and earthquakes. I’m not actually sure how you sound a siren to warn for an earthquake though – but that’s what they said.

Despite its proximity to Japan, Busan is not particularly directly prone to earthquakes, which is just as well considering the dubious build quality of our apartment block. However, with climate change turning the waters off the southern coast we live on subtropical, the Korea Hydrographic and Oceanographic Administration (KHOA) are warning us of worse typhoons and tsunamis in future. Unfortunately, typhoons are a very real threat here as are tsunamis caused by major earthquakes close to Japan.

Telling the two types of sirens apart then is actually quite important, as in principle it’s the difference between heading down into the civil defence shelters otherwise known as the subway system, versus heading for high ground. (In practice however it’s not quite that simple anyway – the subway system might not be the best move in the event of a chemical attack where the gas is heavier than air and sinks).