In the spirit of summer (or rather, the recent end thereof), I thought I would share one of my favorite discoveries from this too quickly gone by summer season: Songjeong Beach, tucked up on Busan's eastern coast in the Haeundae area. Remember how I barely updated at all this summer? Yeah, I was here.

In the spirit of summer (or rather, the recent end thereof), I thought I would share one of my favorite discoveries from this too quickly gone by summer season: Songjeong Beach, tucked up on Busan's eastern coast in the Haeundae area. Remember how I barely updated at all this summer? Yeah, I was here.

Fun Fact: The sand on the beach is soft and fine, unlike the sticky, coarse sand at Gwangalli and Haeundae, Busan's two more famous and more accessible beaches. When you go to Gwangalli or Haeundae, you better be prepared to spend the rest of the day with tiny shell chips and and sand stuck to your legs, clinging to your skin for dear life. Unlike those two, Songjeong's sand isn't trucked in. This is the real deal (read: it's not a man-made beach). It feels nice under your bare feet. And it falls right off your legs easily when it's time to go home.

Fun Fact: Unless you have your own vehicle, you're going to spend a bit of money on a taxi or time on the bus, depending on your starting point. The closest the subway gets is the last few stops on the green line. No fear, your travel efforts will be handsomely rewarded. Because Songjeong isn't completely overrun with tourists, the scene is much less developed than those other aforementioned beaches. For example, you can find like three or four chain coffee shops instead of twenty. Your food options are more limited to Korean restaurants, toast stands, or the couple of convenience stores. Songjeong is Busan's "family beach." 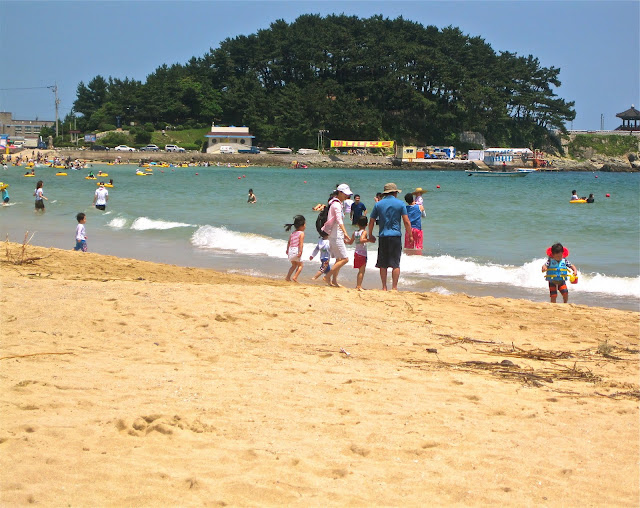 Fun Fact: If you go on a crowded day, and are searching for a precious front-row parasol (because why in the world would you want someone blocking your view of the water), go ahead and keep on looking in the crowded area. There were large sections at Songjeong that looked to us like they had plenty of room for us to nestle in. We lacked the proper military credentials, though, that would have allowed us to park it in that special section. 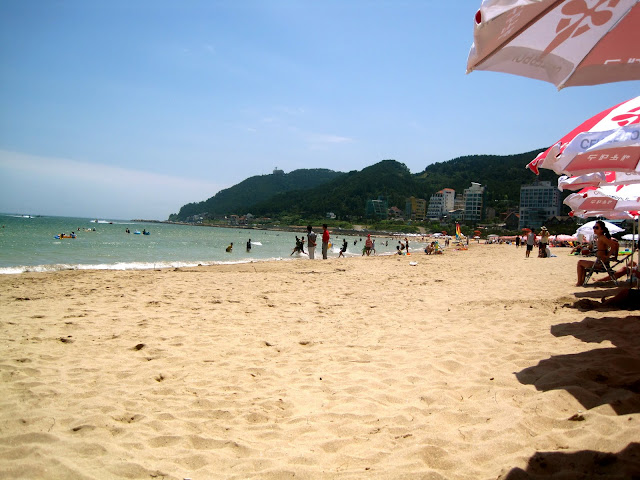 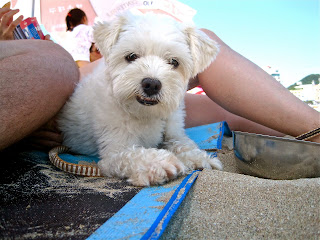 Fun Fact: The water is more blue here than anywhere else we've seen in Busan so far, except Igidae. The teal water and the mountains made for some rad scenery. Plus, there's a banana boat that you can zip around on AND you can camp here. Awesome. 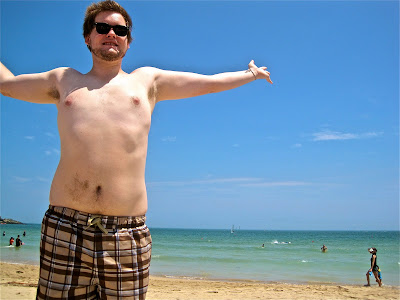 I can only hope that 2011's warm weather stretches long into October like last year. Beach season may be over for everyone else, but for me, Songjeong is still waiting.