I was gonna work out but decided to eat another chunk of Carol’s tiramisu and blog.  It’s all about priorities.

Well, the last two weeks have been incredibly busy.  We’ve got our Navy Reserves in town for the Freedom Banner exercise down in Mokpo, another group of Reserves here for the Joint Chiefs of Staff exercise, Key Resolve and another group helping to support the many ships we have here in the Korean Theater of Operations (KTO).  Been working the last couple of weekends.

I also had the great honor of preaching the sermon at our church here in Busan last Sunday.  Definitely not the typical birthday for me.  I thought it went really well.  Something I won’t easily forget.  I’ll be blogging on that one later.  The latest event that’s been keeping me busy was the big fundraiser we held this past Friday night.

I was gonna work out but decided to eat another chunk of Carol’s tiramisu and blog.  It’s all about priorities.

Well, the last two weeks have been incredibly busy.  We’ve got our Navy Reserves in town for the Freedom Banner exercise down in Mokpo, another group of Reserves here for the Joint Chiefs of Staff exercise, Key Resolve and another group helping to support the many ships we have here in the Korean Theater of Operations (KTO).  Been working the last couple of weekends.

I also had the great honor of preaching the sermon at our church here in Busan last Sunday.  Definitely not the typical birthday for me.  I thought it went really well.  Something I won’t easily forget.  I’ll be blogging on that one later.  The latest event that’s been keeping me busy was the big fundraiser we held this past Friday night.

I digress.  So before I go into details about the fundraiser (can you say “Toga Party?”), I’m long overdue in talking about  the two important causes which this fundraiser benefited – the Sung Ae Won Orphanage and Habitat For Humanity.  My command, Military Sealift Command Korea and the Busan Foreign School decided to team up in an effort to raise awareness and funds for these two causes.

Here’s an article I wrote for the Busan Haps magazine on the fundraiser:

I won’t go into details but the orphanage situation in Korea is significant.  My heart really does go out to these kids.  On a weekly basis I’m dealing with some pretty heavy issues at work – noncombatant evacuation operations, major military exercises, ammunition movements, multiple ships, General and Flag officers and of course, our neighbors to the north.  I can honestly say though that from my vantage point, the most important – and most fulfilling thing I do all week – is visit and hug on those kids at Sung Ae Won.  I can’t make it every week but I try.

I get the feeling that many Koreans think that orphanages are depressing places.  I’ll tell you that from my experience, this is not true at all.  The depressing thing for me is when I have to leave and some of the kids start crying.  With no mom or dad, these kids are missing out on a lot of playing, hugging and affection.  That’s where volunteers can really help out, especially if you’re able to make it a regular occurrence.  It doesn’t cost a thing to volunteer.  Well, maybe gas money or bus/taxi fare.  These kids will love you for it.  Take a look at these pics: 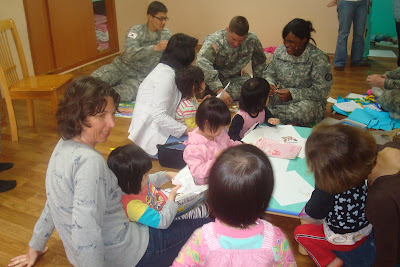 The Busan International Women’s Association (BIWA) is how MSCO Korea and Pier 8 got involved with Sung Ae Won.  What started out as just a handful of volunteers has blossomed into a significant volunteer effort.  Pictured here are some ladies from BIWA and US Army soldiers from Daegu. Here’s Ms. Chang from the MSCO Korea staff playing with the kids.  If you can speak Korean, that’ll make your volunteer experience that much better. 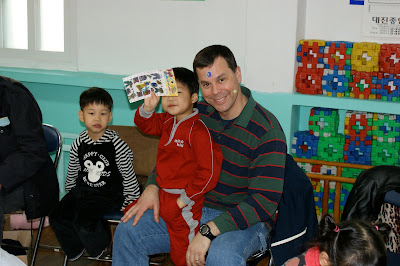 Our Navy Reserves volunteer as well.  When they come to Korea for their duty, they stay very busy.  It says a lot about their character that they spend a few hours on their off day to volunteer at Sung Ae Won.  This is CDR Mike Gochis helping out during a big pizza party we threw for the kids. 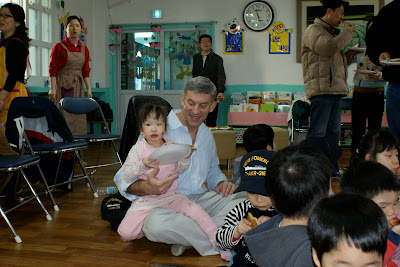 Captain Rich Bayard during the pizza party.  The children can really use male volunteers.  They just don’t get to have much male contact in their lives.  You guys out there in Busan – come on out and help! 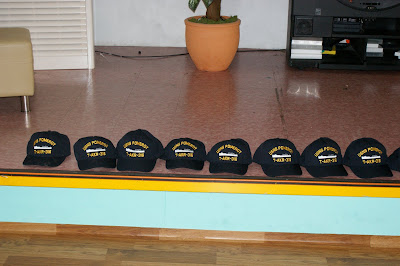 The Captain of the USNS POMEROY, Mike Finnigan gave his ship ballcaps to each of the kids. 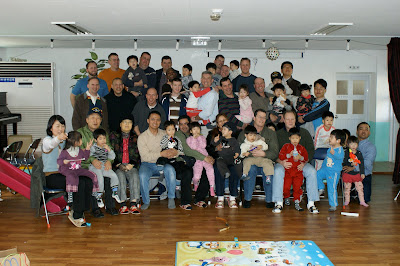 Everyone had a great time at the pizza party. 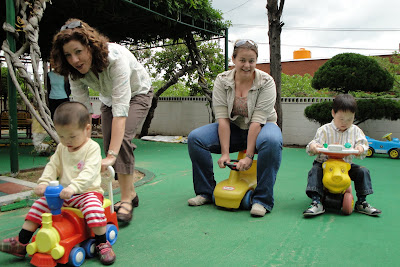 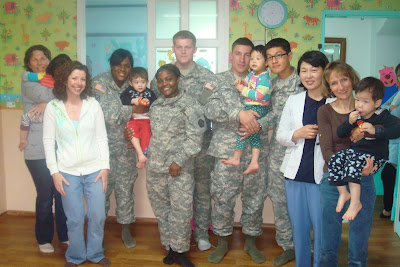 As far as volunteering, first it was BIWA, then MSCO Korea got into the act.  I spread it out to all the commands at Pier 8 to include the US Army and Air Force units and even folks from Daegu.  We also try to get as many of our Navy Reserves to volunteer as well.  We also have volunteer groups from our church, Antioch International Ministries (AIM) of Sooyoungro. 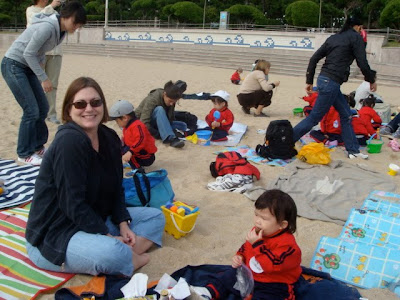 Beach picnic for the kids at Haeundae Beach with BIWA in 2008. 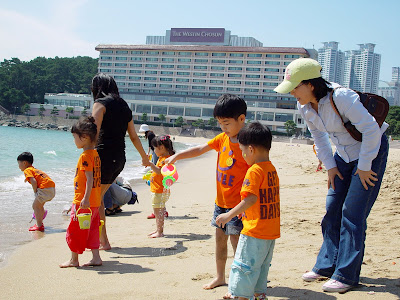 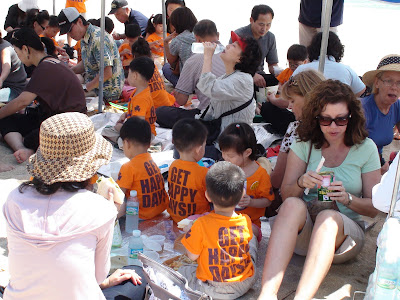 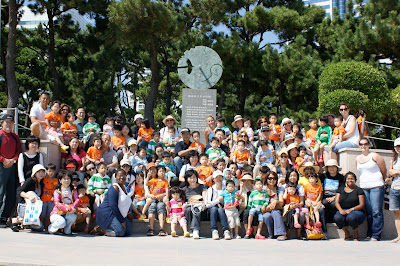 It’s also great when the weather cooperates.  Awesome beach day with the kids! 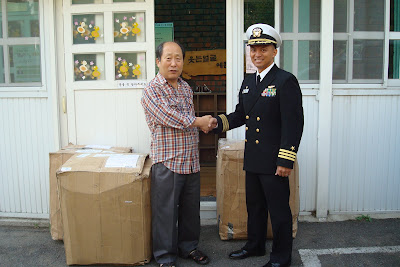 One of our good friends in Alabama sent us a bunch of children’s clothes for the orphanage.  She rallied some of her friends to contribute from thousands of miles away.  This is the Chairman of Sung Ae Won accepting the clothing donation.  Thank you so much Heather!  For those of you in the US or wherever, if you have children’s clothing that’s just sitting around the house, we’ll gladly accept them and send them over to Sung Ae Won! 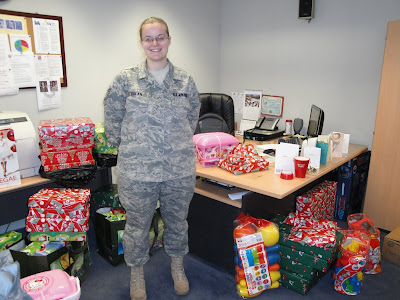 TSgt Galan was key to a successful toy drive for Sung Ae Won.  Because of this toy drive, we were able to provide each child their own toy during the Christmas Party that we sponsored. 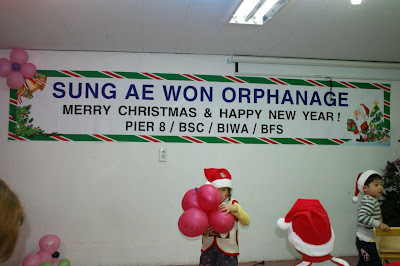 The Christmas Party was a huge success.  We had face painting, a magician, pizza and lots of good food, plenty of toys and just a great time. 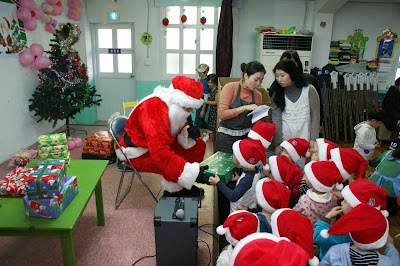 We even had a Korean speaking Santa Claus to give presents to every child. 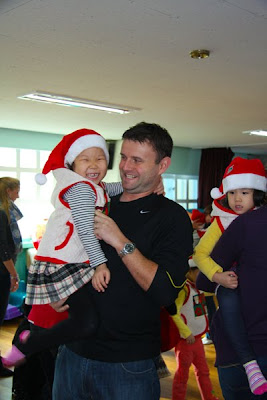 Here’s Scott Jolly, the Principal of Busan Foreign School.  BFS also had a toy drive which helped make the Christmas Party a big success.  Thanks a bunch Scott, Amber and the rest of the BFS crew! 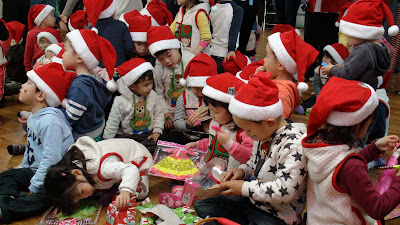 Most of the little girls asked for Barbie dolls.  We even got them little hanboks for the dolls.  They loved them! 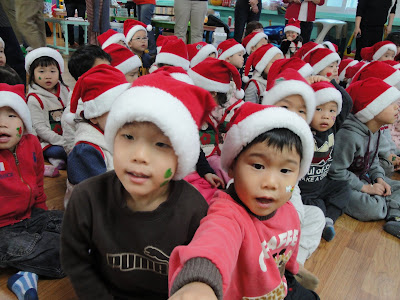 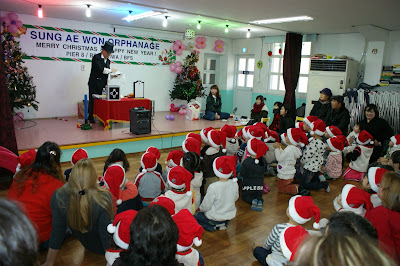 The kids were mesmerized by the magic show.  It was their first time seeing magic tricks. 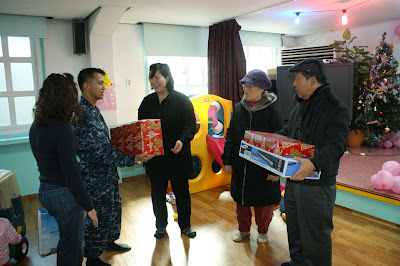 We were also able to provide the orphanage with some special gifts.  They were in need of DVD players so we got them two.  We also got them a Wii video game system with 4 controllers.  When it gets cold, it’s hard for the kids to have good physical activity.  The Wii is one way for them to expel some energy. 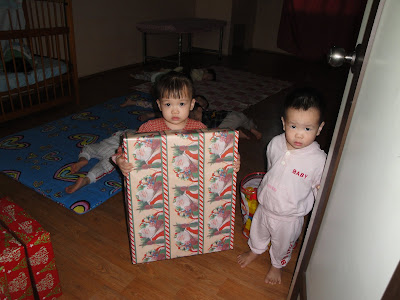 Some of the smaller kids were asleep when Santa Claus came.  Here are two kids that understand that “the early bird gets the worm.”  Check out the sleepy-heads in the background.  This little girl was not gonna let go of this present! 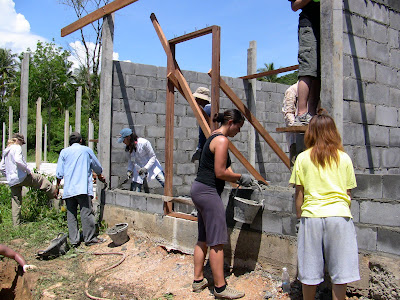 The Busan Foreign School has been volunteering for Habitat For Humanity for a couple of years now.  Building homes for those less fortunate is hard work.  We’re talking serious sweat and soreness.  Here is the BFS crew in action in Thailand. 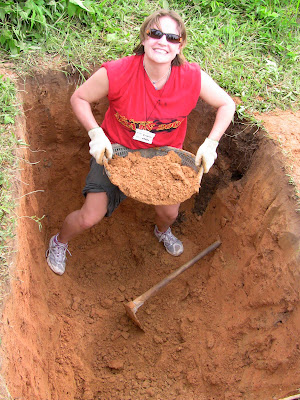 Here’s Kristin doing her best “Cool Hand Luke” impersonation.  Kristin also had the great idea of teaming up and doing the combined fundraiser. 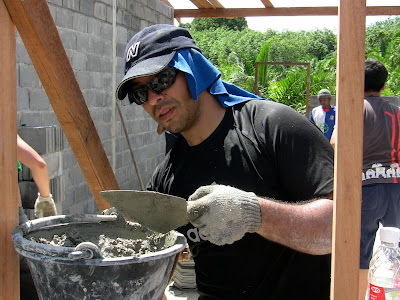 Sebastian Cabrera hard at work under the hot sun. 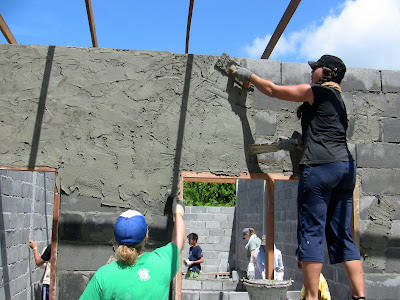 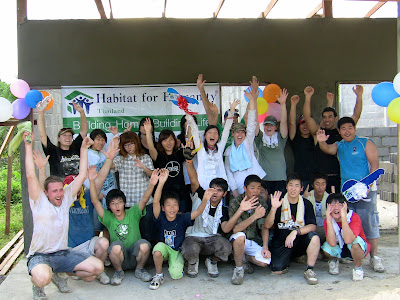 Finally done!  The students undergo a life changing experience from this volunteer effort.  Many of us are coddled in our comfortable environments and forget how difficult life is for millions of people out there.  There’s nothing more fulfilling than helping others.


I’ve gotten several requests through previous blog entries from folks who want to help at the orphanage.  It’s always heartwarming to hear from folks that want to help.  For those interested in volunteering at Sung Ae Won, take a look at the scanned brochure below.  You’ll have to click on the picture to read it properly of course.  It has contact information and different ways you can help.  Chris from the orphanage speaks great English and is incredibly helpful.  I hope you can make some time to spend with these kids. 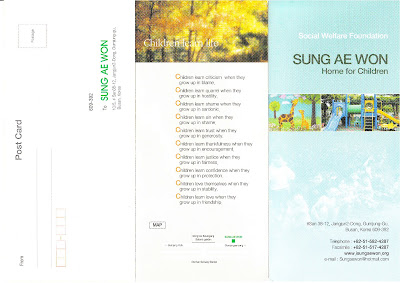 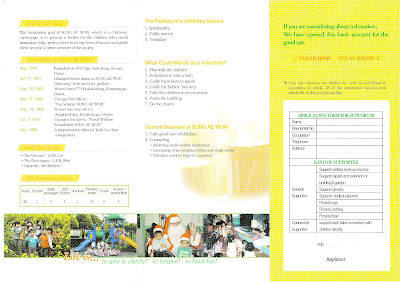 So here are a couple of pointers for potential volunteers:

– Always call in advance.  Sometimes the kids will get sick or have last minute schedule changes where a visit will need to be rescheduled.

– The little ones (2 year olds) are great.  They will jump into your arms and sit in your laps after just a few minutes.  The 3 year olds can be skiddish sometimes.  They can get shy and even cry so you’ll need to warm up to them more than the others.  The 4 year olds and older usually aren’t shy.

– They love playing with little adhesive stickers.  Bringing stickers and maybe some paper for them to stick on is a nice ice breaker.

– Crayons and paper is good too.  Some of them might put things into their mouths that they’re not supposed to.  Just watch out for that.

– Take their picture and show it to them on your camera.  They usually get a kick out of that.

– They like small treats – raisins, fruit, etc.  I’d ask the helpers first if it’s okay to give candy and other snacks.  You don’t want to ruin their lunch or dinner.

– Bounce them on your knee.

– As you’re holding them in your arms bear hug style, lean forward and dip them down.

– Don’t be afraid to just pick one up and put them in your lap.  They’ll let you know if they want to get down.

In the last two years, we’ve been able to do some really good things for Sung Ae Won.  The volunteer effort is off and running but they can really use your help.  If you’re reading this and no one has ever pushed you to volunteer, well I’m pushing you now.  If you’re Busan, Sung Ae Won can use your help.  If you’re in the US, how about Habitat For Humanity, Big Brothers or Big Sisters or any one of many great organizations?  You’re a good person, otherwise you wouldn’t be reading this.  Now it’s time to stop talking and do something about it!

Speaking of doing something, that’s exactly why MSCO Korea and Busan Foreign School teamed up to do a big fundraiser…but that’s for the next entry.  Stay tuned.  Until next time — C2