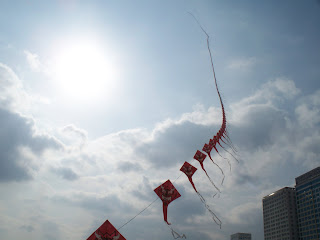 As the Midwestern U.S. remains in deep freeze and London digs out of the biggest snow in memory I thought it would be timely to describe the winter weather here in Busan. One of the wiser things that I investigated prior to selecting my Korean destination was the climate and Busan was described as having “mild winters and hot, wet summers.” This is an apt description. This winter has only had a few brief stretches of really cold weather and these were due primarily to wind chill.

As the Midwestern U.S. remains in deep freeze and London digs out of the biggest snow in memory I thought it would be timely to describe the winter weather here in Busan. One of the wiser things that I investigated prior to selecting my Korean destination was the climate and Busan was described as having “mild winters and hot, wet summers.” This is an apt description. This winter has only had a few brief stretches of really cold weather and these were due primarily to wind chill. I have been told that it is rare for there to be prolonged stretches of sub-freezing weather because of the proximity of the ocean, but I am not sure of this. When the wind blows hard from the north, across frozen Russia and over the Gobi, I doubt the ocean has much to say about it. I did a little research and found an archive of last February’s weather data.This reveals an average high of 47 and an average low of 32, with a high monthly temperature of 57 and a low of 21. These are significantly warmer conditions than I am used to at this time of year. Temperatures in my hometown can reach down into the negative numbers in February.

I took a walk today at lunch time and sat outside reading on a sunny park bench. I smell now the odors I associate with Spring: dead grass and decomposition, warm earth and pine needles. The bamboo grove that backs the bus stop is abuzz with a flock of chickadees. The days are growing noticeably longer now. I leave school at 6:30 and there is now still a little light. A small temple sits halfway up the mountain across the valley from the school and as I was walking down to the bus last week they were ringing the huge bell: long, deep tolls, the call for sunset prayers.

There is a series of French films with English subtitles at the art film theater in Busan for the next three weeks, so Yujin will be staying with me a lot more, which is nice. I will be attending them with her. I have been trying out some more public baths but I haven’t found any that I like as much as the one near my house, which is clean, and nice, and large enough that you don’t feel claustrophobic. There is a necessary attention to personal space in a place like that and when there is a crowd that becomes a bit of a problem. I made a new friend through my blog (Hi, Wendy!) and she and her friends are jimjilbang enthusiasts as well and told me of some I will definitely try soon. One has tubs of “doctor fish”. I gather that the little fellers exfoliate your feet while they soak. Not exactly what I would call appetizing but it beats being a blue-fly in a hog shed I guess. 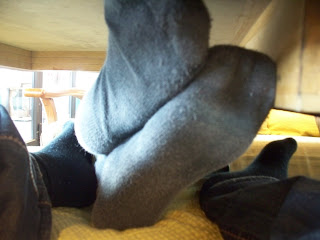 On Sunday it was a breezy 56 and we got up early and went to our favorite Sunday brunch spot, the G Terrace on Gwangan Beach. This cavernous place has outdoor seating and indoor balconies and on Sundays they put out a simple brunch with fruit and cereal and salad, make-it-yerself French bread pizza, scrambled and boiled eggs, toast and soup. (I like to use the pizza fixings to make an omelet). It is only W6000 for the lunch and it includes all the coffee and tea you want so it is a real bargain. For W4000 more you can get one of four entrees. We usually split one. Add in the front row view of the ocean and the bridge and it is hard to beat. The street side tables are very comfortable and the tables inside are fronted by couches with huge fluffy cushions. We like to take a book and hang out for a bit. The owner is nice to a fault, so if you go “take what you want and eat what you take.”

Afterwords, we went for a walk on the beach and saw an amazing sight. A man was in the process of launching hundreds of kites on a single line. I have never seen anything like it. They stretched up into the sun. And he just kept pulling them out of the box. Long after we had stopped and gawked and went on I looked far back down the beach and he was still pulling them out. We stopped at a small amusement park and rode the “Viking (somethingorother)” which was far more terrifying that it looked. I screamed until the tears ran down my face and Yujin laughed so hard she begged me to stop it but I was only partly faking. She has come to the point where she will walk blocks out of her way to avoid passing a public bath with me because I want to try them all and this time she was trying to get me to look the other way but I smelled one (the steam rooms have huge bags of medicinal herbs in them and the ventilation has a rather distinctive odor). I really liked that bathhouse. It was packed but the co-ed nappy room (you sleep on heated stone floors with a block of cedar wood for a pillow and you would be surprised at how comfy it is) had a huge tub of hot clay balls about the size of marbles and we nestled down in there and stared out the huge windows at the sailboats on the ocean. Very nice.