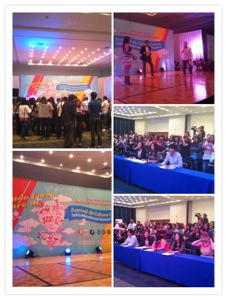 Last Sunday Mexico welcomed the TTMIK  and Eat Your Kimchi Couple at the WTC for the Talk to Me in Korean Around the World 1st event.  I blogged about it here.

I was really excited to meet Hyunwoo Sun and Kyeong-un Choi since I’ve been listening to their lesssons ever since they were with KoreanClass101, this event was organized by Javi Maldonado from hablameencoreano.com with TTMIK, there were Speach, Singing and Dance contests but to be honest I didn’t know what to expect so..here we go…

It all OBVIOUSLY started with Oppa Gangnam Style

The Good:
It was the ideal place for a KPOP fan…yup if you are into other aspects of Korea this might not be the ideal event for you… The event was full of mostly Teenagers crazy for Kpop, so this is the perfect place if you want some new Kpop friends
There were 3 Contests, Speach, Singing and Dancing there were about 30 contestans (Solo performances and group Performances) and there were 3 winners for each contest with awards of $12,000 MXP, $6,000 and $3,000 (Pretty good, huh??) 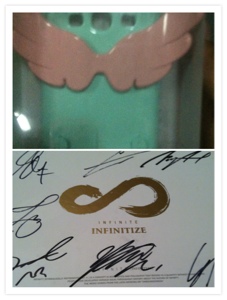 Throughout the even they gave different prices with the ticket numbers, I got a signed Infinite CD (Courtesy of TTMIK), Soompi Spanish gave other CD’s (2PM, BigBang, etc)

They also gave a couple of Korean books and Phone cases…. I thought they were going to give TTMIK Books since they just started selling them but NO, again most of the prices were Kpop related.
Oh!! I also got a phonecase at the end!!, they were asking for people wearing Kpop socks and luckily I was the only one (I feel a little bit embarassed about this…)
The Speach contest gave me the impression that it was more a Charisma contest than a speach contest…. seriously, some of them were more focused on trying to make people laugh than to actually speak Korean, at the end I seriously thought the 2nd place deserved the 1st place since she was very good at Korean and was there for a Speach contest ….

I LOVED the beggining of the Dance contest, the 1st team was a group of 5 guys and covered Lucifer by SHINee….and if you don’t know this I LOVE this song, this song reminds me of my 1st trip to Korea so it put me in a good mood until the rest of the teams came and they all felt the need to dance “Gangnam Style”… It was good the first 3 times but when you hve to see 12 groups dancing Gangnam Style this can be a little too much…..

For the Singing contest there was no Gangnam Style (yay!!!), the most popular song was “Lonely” by 2NE1 but my favorite was “That XX” by G-Dragon…cuz you know how much I love like GD 🙂

At the end of the event I only got to talk with 3 teachers of TTMIK and they were all very nice, Hyojin An was kind enough to ask me to send her my interview questions (since we didn’t have time that day) and she will reply to me as soon as possible :). (I’ll post the 10secs interview on a different post :$ )

The Bad:
…….Don’t know how to start…..
The event was due to start at 1pm, the people who got their tickets online (me and another…100-200people) were supposed to access first., we were supposed to bring our purchase code, receive our $3USD (per ticket) back and  go inside, but NO they made us make a line and stand there for over an hour… OVER AN HOUR PEOPLE!!! and then they decided to 1st let in the people who bought their tickets that day…. It’s ok… I thought…. there’s enough space for ALL of us…. then the line to pick up the tickets was crazy long and the people giving out the tickets was a BIT slow….at some point Hyojin An (TTMIK) asked me for my Purchase code and handed me my 2 tickets….I was so excited to finally have my tickets(arond 1:20pm) that I forgot to ask about the money they were supposed to give us back….
According to the promotion made online, there were going to be Korean products for sale at the event…. in my opinion selling ChocoPie and Aloe drinks is not KOREAN products, specially since there was a No-food policy inside of the place…. They were also selling T-shirts of the event (Not a Korean product….) and Leggings because what’s MORE Korean than worldwide known leggings, right? 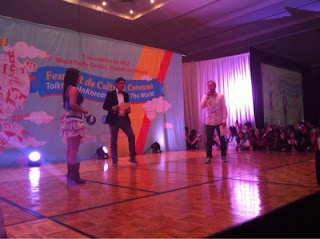 The organization was awfull, there were 3 MCs, Javi Maldonado, Fer Gay (He’s got a music show on TV) and Caeli (Youtube “Celebrity”)… I understand they wanted to invite Fer Gay since he recently interviewed Junsu in Mexico and has made some Kpop specials on TV but what I don’t get is WHY Caeli??,,,, I of course searched for her videos when I saw the TTMIK event poster because I didn’t know who she was, turns out she makes funny videos about life in general and for what I saw at the event she has no knowledge of Korea or Kpop, and kept calling Martha to Martina, most of the times she wasn’t able to translate what the TTMIK Teachers said in English (I wasn’t expecting her to speak Korean hehe) and for what I saw, she wasn’t into the event in general, when the Speach contest was On she was taking pictures with her fans, chatting, drinking water and just being distracted in general…at some point she asked the audience “Why they wanted to travel to Korea” and some people said “Because of the Food!!!” (It wasn’t me I swear!! kkkk) and she said “Really???….”  hmmm…. Please if someone know why was she asked to be the MC of the event let me know because I still don’t get it.
The UGLY
Eat Your Kimchi came all the way to Mexico to Judge the Dancing Contest, some people were more into taking pictures with them than the actual contest…. 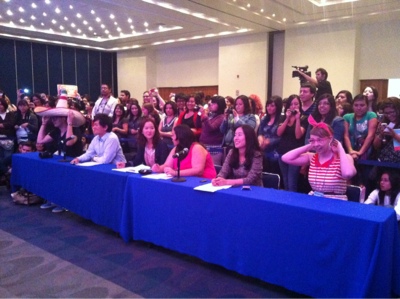 At the end of the event Hyunwoo Sun said “We are gonna have some time if you want to take Pictures, an autograph or say Hello to the Teachers or EYK at the end of the event!!!”, so when the contest for an All expenses paid TRIP to Korea ended it was time for pictures, right?…. right??… RIGHT???????? WRONG!!!

After this, they started kicking everyone out stating the pictures will be taken in the Hallway, I thought it was weird but hey! maybe the contract for the place ended at 8pm…. I asked Simon and Martina for a lil interview when I actidentally (for real!!!) met them at the restroom and they said we will have time at the end but there was this girl (Stephany) who wasn’t allowing people to get close with them anymore, as if all of us were holding guns or if they were in danger just being there…. Saddly they went out through the back door…. I waited a bit longer for the interview with the TTMIK teachers but I was seriously tired and in a bad mood because of the poor organization of the event so I went to Hyunwoo Sun at the end and just asked him for a short message…. I’m glad I asked Seokjin Jin a couple of questions earlier!!
I understand they were all tired because it was indeed a very long event, but guys if you don’t really have time or energy for pictures/autographs…. SAY SO!!!! I feel really bad because when I went out (I was one of the last ones) I saw girls standing at the Hallway waiting for Eat Your Kimchi and the TTMIK Teachers, I don’t know if they did take pictures in the hallway at the end because I left…. 🙁
To be honest, I was really excited about this event when I 1st heard about it and I was happy they chose Mexico to be the 1st Country on their tour, but the poor organization was very disapointing….
Hopefully their next events will have a better organization and they will have time to spend with their fans.
And I hope more Korean events take place in Mexico 🙂 ….not only Kpop events!… If anyone out there is reading me and work with the KCC in Mexico… PLEASE make a Food-related event!! 🙂
-Gisela V.
Ps. If the girl who took my picture with Simon is reading me, can you send me the picture please?? 🙂