Teaching ESL in South Korea for one year – fun and exhilarating.

Teaching for two years – interesting and more time to explore things now that you’re settled in.

Teaching ESL in South Korea for one year – fun and exhilarating.

Teaching for two years – interesting and more time to explore things now that you’re settled in.

During the first six months of teaching English in Korea everything seems like a blur. Everything is new. Everything. The sights, the smells, the flavors, the sounds, the realization of what you’ve chosen to do. You’ve got a free apartment, full coverage of benefits, and a paycheck each month to boot. You’re meeting people from different Western countries, chillin’ with “authentic” Koreans, eating their food, and it’s all good. It seems as though you’ve hit the jackpot and can’t think of a reason why you’d ever want to give it up.

It’s a no-brainer to re-sign after the one year mark. So, of course, you do.

The second year is much of the same, but now you’re safe and secure in your routine, you can get around on the subway, you can even read hangul now! You see more of the things you wanted to in the first year but didn’t have the time to fit in. The first year seems to be a never-ending onslaught of social invites every weekend for drinking, hiking, sightseeing…taking pictures in front of Korean stuff.

When I first went away to college it was like no other feeling. I was away from my family for the first time in my life and the bell-to-bell schedule of each day was completely up to me, with the exception of these strange, daily student conventions called “classes”. My world was turned on it’s ear and I can’t find the words to describe the feeling. Even more so now, years later, it’s impossible to explain what those virgin moments were really like. Indescribable.

In some ways, teaching abroad in a country like South Korea is much the same. I remember a get together, early on, with some of the teachers that were in my orientation class; one teacher mentioned, “I’m never gonna leave!” A year later she and her husband moved on.

Out with the new, in with the old

I was once told that most teachers max out at around three years.

During this third year I’ve realized why this may be a ceiling for teachers, but even more so, a crossroads where a go/no-go decision is critical. 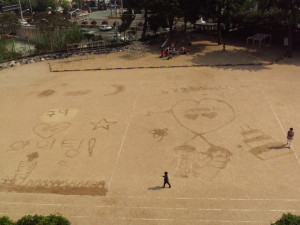 “Critical” is such a formal and stuffy word, but deciding to move on or stay can make or break many. This includes those who came here, fell in love, settled down into marriage, and found themselves three, five, TEN years into the experience. No matter what angle or direction you take, at some point you will have seen essentially what there is to see for a foreigner. Most things will have become commonplace. The sights, smells, and sounds will no longer intrigue you. Much like getting to my junior year in college. I found myself becoming anxious to graduate.

For me, I’ve found that life has become more of routines and just doing my life while stationed in Korea. For others, the timing may vary, but it’s an inevitable thing. During my time here I’ve met countless teachers who found comfort in the benefits of the job, stayed for a relationship, or for lack of direction. Many times it’s been too long. Unfortunately, some get jaded and lose sight of what being abroad is about. Getting stuck in limbo between full-fledged foreigner and some sort of one off native that really isn’t…it’s a tough place to be and I’ve seen it happen in living color.

A popular YouTuber named “Smiling Seoul” recently left and I think put it best when she explained that the time was just right to leave. She didn’t want to overstay and run the risk of ruining her time in Korea.

In my case, it’s not so much running the risk of becoming jaded or burnt, but my fear of complacency. The reality of my situation is this: I could easily watch five more years flick by without batting an eye. Everything is in a place of comfort; from the teaching, to daily life, to writing this blog!

Some may say that’s a great thing. It is. At the same time, however, it was never what I set out to do (i.e. to find comfort). I wanted the disruption in my life; that’s why I left it all behind.

Realistically, I could possibly eek out another year come February (2015) if nothing of better value presents itself. EPIK is a short-term, non-career path endeavor and I feel it should be approached with this in mind. It’s really meant to provide Korea’s public schools with the native English exposure it seeks, while providing a means for young individuals to experience a very foreign culture first-hand.

I still can’t believe that three years have come and gone, though I’m so happy they did for me in Korea. The three year comment seems to have come to fruition in my own life and I believe the time is nigh…to move on. It could be in 16 months, maybe 4.

Teaching English in South Korea has reminded me again that there is a time for everything in life. Those times are different for each person. I can’t believe what I’ve become through this experience and I’m eternally grateful for it.

A time to give birth and a time to die,

A time to plant and a time to uproot what has been planted.