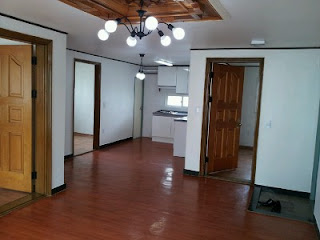 Busan’s been mocking me for months, because for months, months ahead of schedule, I’ve been obsessively checking the Peter Pan cafes for apartments. We’ve been up and down and round and round about what we’re going to do, where we’re going to move, and what kind of place we wanted to get. Jeonsae or weolsae? Move B in first, or put him in temporary place? New and fully furnished (expensive and small) or big and cheap (unfurnished and old)? Temporary, for the next few years, and on a budget? Or take the hit and start settling into a place we could see ourselves in for a while? North, or central? Or really far north? Or west?

The plan has changed as many times as there are combinations to be found in the questions above. But through it all, I’ve been combing over the listings, looking for the perfect place. Just in case. Because you never know.

And then I found this one — a three bedroom 20 pyeong apartment, in a old building, but remodeled. It was closer to the neighborhood that B originally favored, but not too far from the one I was hoping for. Not a terrible commute for either one of us. And almost within our potential weolsae budget (we had a potential jeonsae budget, as well). But the deposit was quite low, so with a bit of readjustment and negotiation, we may be able to squeeze it in. The problem was the fact that B can’t move until mid June, and even after that, the rent was a bit high for him to pay on his own, or for me to contribute to for four months while I’m not living there.

Suffice it to say that, despite multiple warnings from multiple people about how real estate websites always make the place look far better than it actually is, the place was actually great. And with a little bit of chatting with the landlord, slowly, one by one, our obstacles began to fall away. The landlord, as it happens, is from Gyeongju, and recognized B’s Busan accent immediately over the phone, and took an instant shine to him. He also said that his family preferred to have a younger couple move in, because ajumma and ajeosshi tenants (the only other kind biting at the time) could be a handful, and people with children cause a lot more damage.

So on Monday night, we signed. And on Tuesday morning, B, who has been driving me up one wall and down another with out-of-control wiffle-waffling this whole time (I actually stood in the middle of Hongjae Station on Saturday and shouted at him about ‘cultural differences’, in response to which he froze in his tracks and, wide eyed, said, “I’ve never heard you use that phrase before. Must be serious.”) had serious buyer’s remorse. By the time he showed up to my place last night, he looked as though he’d been run over by a truck, which was odd, considering he’d had the day off work.

“What the hell happened to you?”

He’d been up since six am on the internet reading horror stories about people losing their deposits and/or apartments. He’d been down to the city hall office, and found out that there’s still money owed on our apartment, and from there spun an elaborate tale of how we were definitely going to end up homeless and penniless, on the streets, fifty million won poorer.

The thing is, our current landlords have only just purchased the property. They’ve remodeled the place, and listed it up, and then we’ve come along, the first new tenants. I didn’t think, according to that, that it would be surprising that the entire mortgage isn’t paid off yet. I also didn’t think that anyone immediately desperate to pay off a debt would have set the deposit as low as the landlords originally had it set. But what do I know? I’ve never rented an apartment in Korea before. So I was willing to hear him out.

Essentially, the issue is this: If money is still owed on the property you are renting, and if the landlords, for whatever reason, don’t pay their bills and the building goes into foreclosure, then you, as a tenant, could wind up seriously screwed. You could lose your apartment, and, if the landlord is in that much financial trouble, you probably won’t ever see your deposit again either. If you register your deposit, then Seoul protects its citizens with a guaranteed 25 million repayment in just such a case. But that’s still a 25 million won gamble. And B was losing his shit over it. I told him not to think about it anymore  for the day, and he went to lie down (at 8:30 pm) with a crushing migraine, having taken only one bite of his dinner.

This morning over coffee, I tried to reason with him — we had no reason to be suspicious, and certainly it can’t be an uncommon situation — landlords can’t be expected to allow their properties to lie vacant while they are still paying them off. Neither one of us has any experience with this, so why don’t we just spend the day asking people around us who might know better what they think?

And so we did. And everyone has been very reassuring. Of course, anytime you hand over a large sum of money, you are taking at least some risk. But nobody seemed the least bit worried that our situation was more risky than any other. And then B did what I told him not to do, and got back on the internet, but this time to be a bit more proactive, rather than just to read other people’s horror stories and get himself more worked up. He came across 서울 보증 보험, which, for a comparatively small fee per year, will reimburse you almost entirely for you deposit if it happens to be lost somehow.

So now he says he needs to do more “research”, but I think we’ve got the issue pretty much solved. I thought it might be helpful, for those who are thinking of going out on their own with the apartment business, to make a post about a. the ability to check on the debt still owed on your place and b. the government and private insurance policies against deposit fiascoes. I certainly would have never even thought to look into all of this on my own, but I do know that the most important thing is to always, always register any jeonsae or deposit you put down, so that if anything should occur, there is at the very least a legal record (other than the contract) that your money has been paid, and to whom.

So now, after a brief blip on the radar of new apartment bliss, I can get back to worrying about what dining room table will best match which couch. And put this whole apartment mess behind me, months ahead of schedule.