“Time and tide wait for no aggies*.”
– Origin unknown

*Aggy is the Korean word for ‘baby’
“Time and tide wait for no aggies*.”
– Origin unknown

*Aggy is the Korean word for ‘baby’ 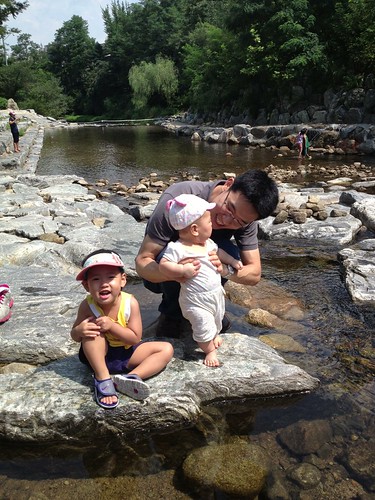 With a distinct dull roar, the ongoings of the recent six months have whooshed past, and off into far distant horizons inhabited by a loose ecosystem of hazy memories unfortified by regular blogging.
The cause of such a predicament, post mortem reveals, can be traced to a series of momentous overlapping life events that converged simultaneously for the perfect
storm, all of which could only be accommodated within an inadequately small teacup of a schedule.
But we have emerged unscathed. And dusted ourselves off to resume blogging with aggies conspicuously older than last seen. 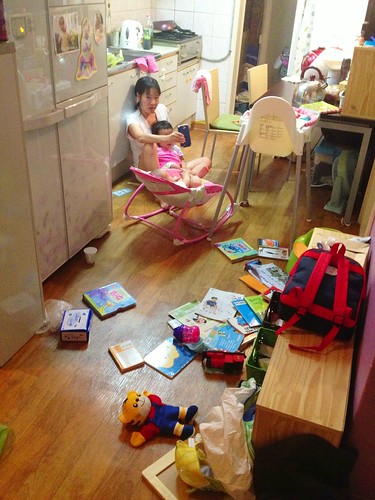 The first major event we dealt with was moving house, as our lease of the SNU family accommodation expired with the completion of my studies. The family mini-apartment we had at SNU on campus was excellent, although quite small for two boisterous babies who enjoy making a mess. We had two bedrooms, our own kitchen, bathroom and two balconies, subsidized to W150,000 per month. It had everything we needed, and made a significant impact on our ability to live comfortably in recent times. 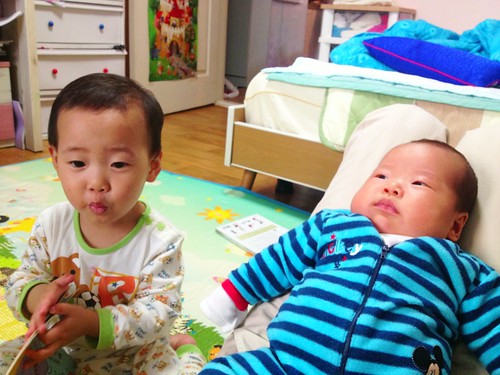 But the time had come to move. All constituents of the Farrand household were thus summoned to attend a Thing, during which the future direction of the household was decided upon.
Finding accommodation for a family in Korea is no easy task. Families in the bigger cities here are like eager hermit crabs, dashing into recently vacated shells whenever an affordable apartment hits the market. Further complicating the matter is the arcane yet popular practice of jeonse, whereby large deposits (hundreds of thousands of dollars) are forwarded from the tenant to the landlord instead of regular rent being paid. The landlord is then free to invest the tenant’s money during the period of the lease contract.
We were faced with the choice of borrowing money from the bank to pay a large jeonse, which we would have had to pay interest on, or borrow an even larger amount of money and buy a house instead. We, of the Farrand tribe, do not take such decisions on a whim. Arguments were heard, opinions were raised and countless cups of tea imbibed. Eventually, a motion was put forward to go the full monty and borrow enough money to purchase our own abode.
The end result of voting was 2 votes in favor, with one abstention and one unintelligible answer. 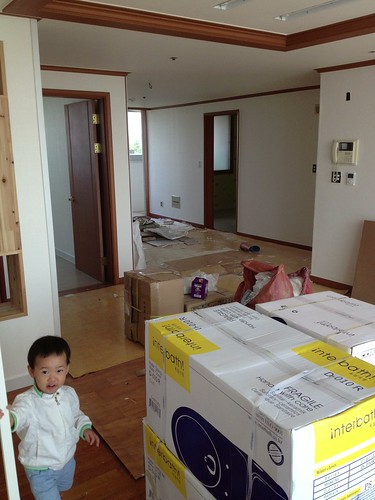 To make a long story short, we ended up buying a house through auction in Suji-Gu, which is about 40 minutes south of Seoul. As fortune would have it, someone (an investor) with lesser fortune had previously purchased a house using borrowed money, defaulted on it, and had it seized by the bank. Heather, being the incalculable genius that she is, managed to win a silent auction on it for only slightly higher than the reserve price. We bought our 31 pyeong apartment for W2,470,000,000 (approx AU$240,000) and spent some further money to remodel the interior. 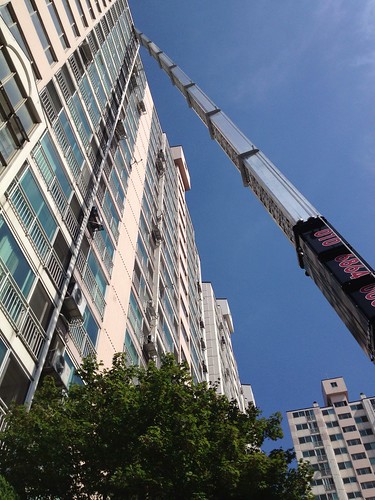 So we moved in at the end of August, an action that required an enormous skycrane to ferret our belongings high up into our new perch. Although it all sounds rather smooth, there were a number of obstacles. Luckily, I have a resilient partner who is also very good at solving all manner of problems. 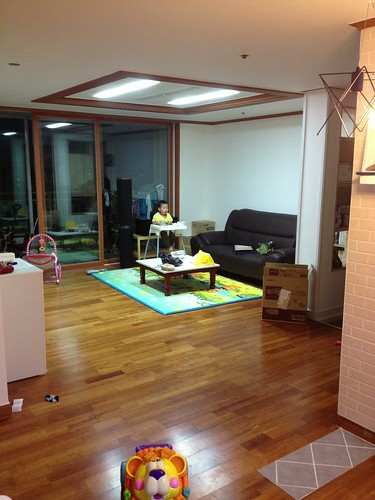 Although our old place was fairly crowded with furniture and belongings, our new place swallowed it all up with room to spare. Previously, whenever Baengy became excited, she would do a sort of hopping jump on the spot to release energy while not bumping into nearby walls in our old place. Now she runs all around our new apartment with glee. I think that simple fact makes all the money and effort worthwhile. 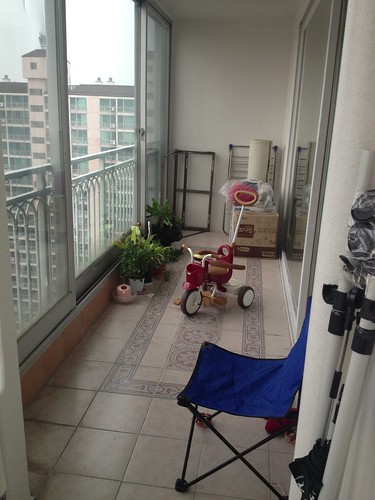 One of our new balconies. 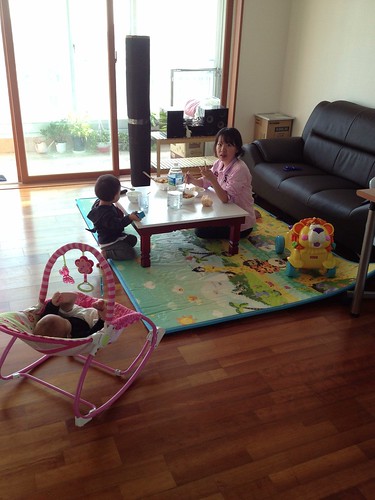 Heather also seems content, although we don’t yet have all the furniture we’d like. Such things shall come, with the passage of time and the arrival of paydays. 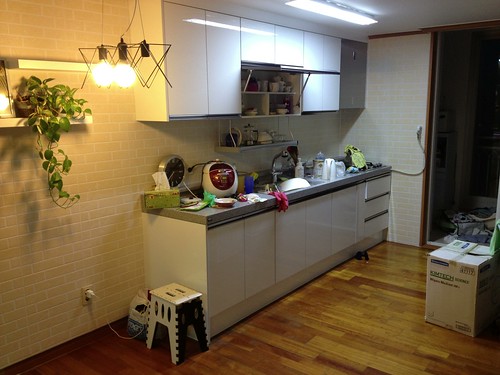 In our new kitchen, it’s strange having so many things that work properly. Our previous gas stove was quite fickle and had to be ignited using a secret ritual, while our old faucet would leak for a while after being turned off. Everything in our new place has an eery efficiency to it. 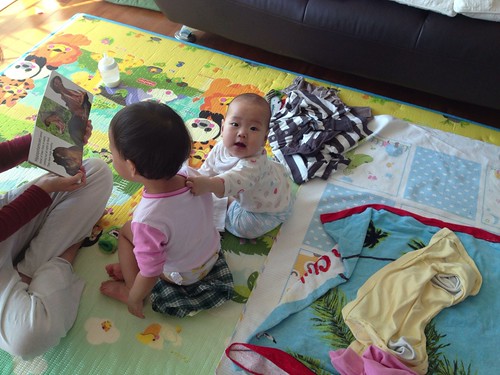 Alex is quite a joy to watch growing up, even by baby standards. He smells like fairy floss and likes his big sister a lot. Big sister exhibits an amusing blend of tolerance and ambivalence toward his frequently outstretched and grasping hands. 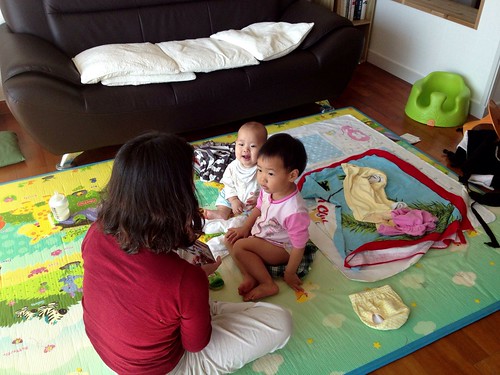 They both like books, sent to them by Grandad Kym and Grandma Mary, and read to them by Mother Farrand. Baengy has already learned the English alphabet. 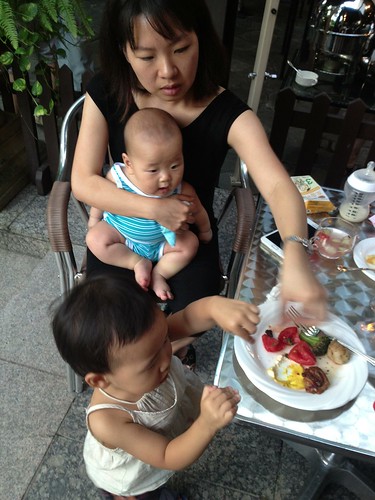 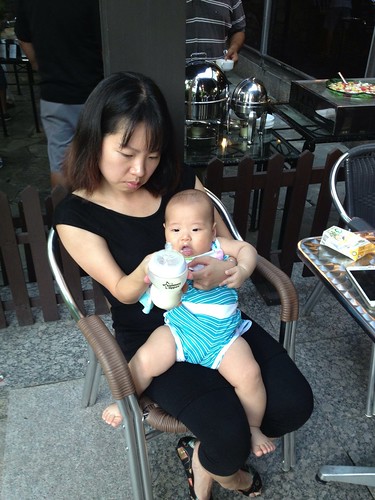 My new job is going well, which I will talk about in more deserving detail in the near future. One of the most noticeable things that’s happened since graduation is that I now have more spare time. I joined the Australian Chamber of Commerce recently, and we’ve attended some of their events. These photos are from a barbecue they held at a hotel in Seoul 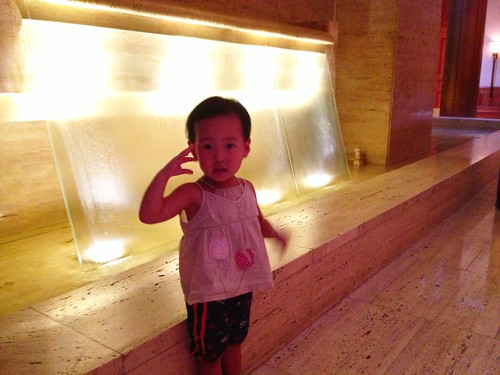 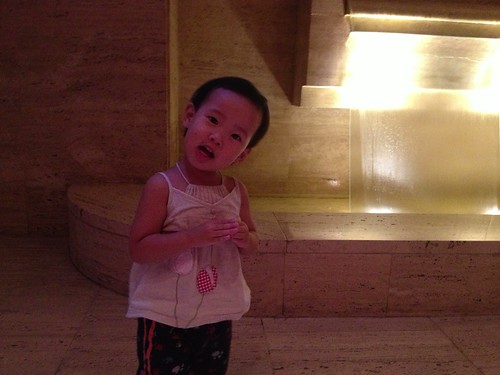 Baengy knows what cameras are and what to do when faced with a lens. One of the funny things she does though, is talk to the person she’s posing for, in babytalk.
“Photo? Cheese?” 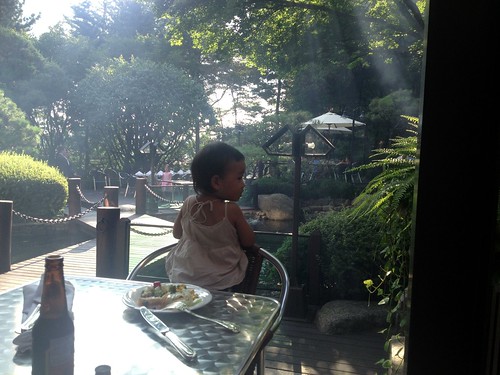 I’ve managed to keep taking photos in regular intervals over the past few months, although I haven’t kept up with the blogging. I’ve decided that I’ll put as many of the good photos up that I can, over time, even if the chronological order is a bit dodgy.
We, the Farrand family of Korea, are in a lucky situation now, with a future to be looked forward to. And Ashley and Alex are both growing up at breakneck speed. I’ll try to keep up my end of the bargain and continue taking photos, and hope the memories won’t be forgotten.