The owners of the apartment we rent recently told us they were planning to sell it, which meant we either had to buy it, or find somewhere else to live. It caused me to consider the fact that in a little over three years, I’ve moved home four times – three times of which were between countries – and perhaps under the circumstances I shouldn’t feel ashamed to be reluctant to add a fifth relocation to my list.

The owners of the apartment we rent recently told us they were planning to sell it, which meant we either had to buy it, or find somewhere else to live. It caused me to consider the fact that in a little over three years, I’ve moved home four times – three times of which were between countries – and perhaps under the circumstances I shouldn’t feel ashamed to be reluctant to add a fifth relocation to my list.

Korean Mother was interested in buying the apartment, but when the owners told her the price she told them she would think about it for a couple of days, since she needed to look into what the going rates were for such properties. This seemed to irritate the impatient owners, who subsequently refused to take her calls. An estate agent then phoned with the news that a potential buyer wanted to come and view the apartment, and they were evasive on the subject of the owners selling it to us. All in all, it was a rather inexplicable situation, but one which left us looking for a new place – lest we find ourselves with two weeks notice and nowhere to go.

It may have been a lucky escape though. Later one evening, a message was broadcast over the Orwellian apartment speakers informing the occupants of our apartment block that if they wanted to join the lawsuit against the builders, they had to submit their paperwork by the end of the week. I can’t say that I’m entirely surprised by this revelation – for a building only completed five years ago I’ve often of late cast a leery eye over the external paintwork and fittings, which it’s occurred to me would not have looked out of place in 1980s Beirut. One must keep a sense of perspective however – I’ve since been shown an apartment which was retrofitted with metal bars to stop the ceiling buckling. Admittedly it was older than ours, but this is no more comforting.

When I returned to Korea the area next door to our ailing apartment block was a building site. Now it’s a large hospital. In three months. I couldn’t imagine anything like that going up so quickly back in England. Workmen toiled relentlessly seven days a week on that project until at least 11pm every night, possibly even later – which may go some way towards explaining the rapidity of their completion. One wonders about the build quality though – how can people not help but be affected by fatigue into the twelfth or thirteenth hour of work which you know they are doing? And perhaps that explains how our apartment block came to have such a beaten look only five years into its existence.

The realities of certain aspects of life here are hardly lost on the locals, who have a term for this kind of thing – “빨리 빨리 병”, ‘bbali bbali byeong’ – ‘fast fast disease’, the notion that in the rush to do things certain problems are often built into the results, or to put it even more simply – Koreans are impatient. Personally, I admire the drive of Korean society when compared against my own upbringing in the rump of a stagnated and faded empire, but the endless planning enquiries and health and safety considerations which prevent hospitals being built in three months back in England, also tend to stop people recklessly endangering themselves and everyone else.

So it no longer quite surprises me when I see a man standing precariously on the remains of a floor in a building being demolished, trying to knock down a wall with a sledgehammer, or an impossibly overloaded truck which looks like an accident waiting to happen. It’s just ‘빨리 빨리 병’, and you can’t escape from it here. 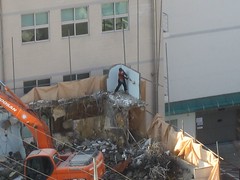 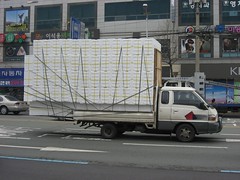