A couple of stories caught my eye over the weekend, both dealing with homelessness in South Korea. The first is just a short stat blurb from Yonhap saying in entirety:

SEOUL, Sept. 25 (Yonhap) — Despite the government’s perennial efforts to reduce social bipolarization, the number of homeless people nationwide is on the rise, government data showed Sunday.

A couple of stories caught my eye over the weekend, both dealing with homelessness in South Korea. The first is just a short stat blurb from Yonhap saying in entirety:

SEOUL, Sept. 25 (Yonhap) — Despite the government’s perennial efforts to reduce social bipolarization, the number of homeless people nationwide is on the rise, government data showed Sunday.

As of the end of June, a total of 4,403 people were classified as homeless, up from 4,187 people at the end of 2010, according to the data submitted by the Ministry of Health and Welfare to Rep. Yoo Jeong-bok of the ruling Grand National Party.

Now even if that number is a bit low (as government numbers tend to be given the broad possible definition of “homeless”), we are still looking at an incredibly small number , even in comparison to other developed countries. Even in Seoul, where the vast majority of South Korean homeless live, I would argue the actual percentages and ‘visability’ of the homeless is much lower than USA urban centers. Even Seoul Station, the defacto homeless mecca within the capital, is no worse than Denver’s Capital Hill area on a usual day.

The second story that caught my attention (HT to Korea Beat) was actually the number 1 story on Naver this past week. The original article is unfortunately in Korean. To summarize, it was found that a homeless man in Seoul has been walking around with about 5 Billion won in cashier checks and currency in a large bag. That’s billion with a B and if correct, converts to around 5 million dollars US. This came to light only after the bag was stolen by another homeless man in the area (who apparently didn’t open it) and the police helped the owner get it back. The world’s richest hobo, who apparently used the bag of wealth as a pillow, is a 51 year old man who inherited a large fortune from his parents as a young man, lived fast and loose for many years with fast cars, nice homes and never got married. After a business failed, he stopped working at all and over years sold his homes, cars and removed all his money from investments and banks. Towards the end of last year, he finished his purge and began living on the streets, forgoing even hotels or homeless shelters. He has said he will continue to do so, although he may now consider returning some money to banks and carry a debit card instead of the bag. 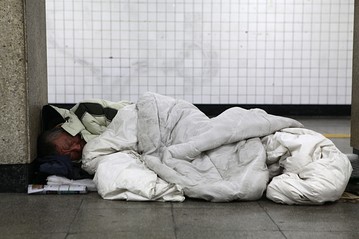 These stories got my mind going on the idea of homelessness in Korea and the causes. In a country with such good employment numbers (3.3% according to recent data) and a fairly strong sense of social welfare (at least monetarily), just why are the numbers increasing? In my mind, there are two major social problems in Korea and both of these undoubtedly affect the homeless issue, so rather than a problem in itself perhaps it is simply a symptom of bigger issues. As mentioned above, a trip to Seoul Station is about the only place to be really confronted with the homeless in Seoul. Media attention has recent been given to this location, such as this story from the WSJ Online, as increased numbers have lead to increased complaints from travelers. Recently, an even bigger spotlight has been put on the issue as last month the old Seoul Station has been turned into a cultural space, trying to attract visitors (these this post over at MH). While I would rank the homeless as the (by far) second annoyance of Seoul Station behind the very loud evangelicals, a quick look around them and you’ll get the immediate impression that these men aren’t well. As discussed in previous posts, South Korea is severely deficient and under-developed in terms of identifying and treating mental illness. The government and social groups may be providing beds and food to these people, but given that only 20% are taking advantage of this, we have to assume the rest don’t have the mental capacity to accept this help. Undoubtedly, there are mental health issues at play with homeless problems around the world, but South Korea’s inability, or unwillingness, to recognize and treat this core problem means worsening symptoms. Additionally, and still connected to mental health, Korea has a very quickly aging population (one of the highest rates in the world). As the population ages, rates of dementia increase as well. When we consider that alcohol abuse only quickens the deterioration of the brain, we can see why South Korea is seeing increased numbers in a very specific population segment (older males) and why increased welfare hasn’t helped. Hopefully increased numbers will lead to increased awareness on the root problems. Treating the symptoms (not only homelessness, but suicide rates as well) will never truly make the country better, but better mental health can.