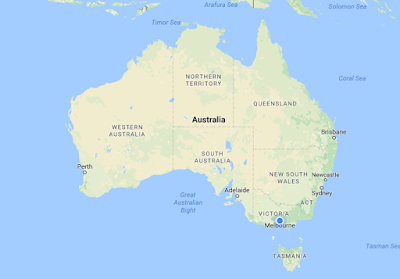 So, my Korean in-laws finally stepped-out of Korea.  For the first time in their lives they made it to another country.  And I missed it!

I was actually really gutted.  I had longed planned a big cycle touring trip of Australasia; firstly cycling from Darwin to Melbourne in Australia and then cycling all around New Zealand over a period of about 3 months or so.

So, my Korean in-laws finally stepped-out of Korea.  For the first time in their lives they made it to another country.  And I missed it!

I was actually really gutted.  I had longed planned a big cycle touring trip of Australasia; firstly cycling from Darwin to Melbourne in Australia and then cycling all around New Zealand over a period of about 3 months or so.

Unfortunately, this coincided with their trip to see my wife, which occurred fairly last-minute due to my wife having a short gap between jobs.  Seeing as my wife had some time-off they jumped at the chance to come visit.

I had always looked-forward to observing how my in-laws would react in a Western English-speaking country that was well outside of their comfort zone.  My in-laws are both from Suncheon, a smallish city in Jeollanamdo, quite possibly the most rural province in Korea and quite far from the international hubs of Seoul and Busan.

In Korea, I was the stumbling, bumbling fool, who got around with limited Korean and was ignorant of a wide variety of cultural practices and things going on around me. Now it was their turn.

I wasn’t just interested in a bit of schadenfreude, however (although it would have been wonderful), I was actually really curious to see how they’d react to it all.  Fortunately, my wife kept me up to date with what was going on.

As I suspected, my mother in-law appeared to be quite fascinated with everything and open-minded, especially with regard to food.  My father in-law, not so much.

The first thing they did after leaving the airport in Melbourne was go to the nearest Korean restaurant, even before going home to freshen up.  My wife told me that in the week her father was there, he ate pork belly every single day (this is the cut used in samgyeopsal in Korea), and in the whole time he was there ate nothing but Korean food except on two occasions; once eating a warm jam doughnut at Victoria Market, and one time eating fish and chips while on the Great Ocean Road.  Apparently, the fish and chips made him literally sick later on that evening.  He was also quite pleased that he could buy an ample amount of soju to wash down the copious amount of pork belly he was consuming.

Surprisingly, perhaps, they commented that my wife should not come back to Korea, and that they really liked Australia.  Maybe some of this is to do with how successful my wife has been (after a tough 2 years) in Melbourne.  They beamed with pride about how my wife works as a surgery room nurse in the most prestigious public hospital in Melbourne, The Alfred.  One of their few requests for places to visit was the hospital itself, and they made sure all their friends back home knew about this.

Among the things that impressed my father in-law about Australia was the sheer scale of the place and the abundance of open land.  On their trip along the Great Ocean Road, my wife said he gazed in fascination out of the window for most of the journey, even when there was little to see.  To be fair Australia’s wide expanses of flat, baron land must be quite a difference to the lifetime of forested mountains he must have been used to, with cities and buildings squeezed into the flat spaces in between (he should cycle through the centre of the country for a real shock).

Of course, the thing that gave him the most joy was the cost of pork belly, which was quite a bit less expensive than Korea.  Apparently, the jam doughnut in Victoria Market was the only distraction from him salivating over the cheap choice cuts of pork belly at the butchers there.

My mother in-law was taken aback by the number of men she saw pushing prams and carrying babies.  She thought this was a great thing, and something she never really saw in Korea.  She was also very happy with how politely she was treated by the young men she came into contact with generally.  She was less impressed with the women, however, who she perceived as being a little more cold, self-entitled, and uptight than she expected.

Another thing that caught her eye was just how individual people were in their sense of style.  Melbourne is perhaps an especially noticeable place for things like this, with St Kilda where I live being a particularly eccentric place.  She was intrigued about how people mostly didn’t give a damn about what they were wearing or how they were acting.

My mother in-law stayed on for 2 weeks longer than my father in-law, who had work commitments after one week.  She was able to go on an extra trip over to the Grampians, a range of unique-looking mountains a couple of hours North-West of Melbourne.  Unfortunately for her, this coach trip was also frequented by a large number of Indians, who were apparently smelling strongly of curry and body odour (I promise you these are her and my wife’s words, not mine).  Knowing that my wife and my mother in-law are a pair of bloodhounds when it comes to their sense of smell (they have both put me to the sword at times for “Western smell”), and rather intolerant of unwelcome odours, this put a smile on my face while I was cycling through New Zealand.  Apparently they moved seats several times to escape the worst of the stench, but to no avail.  They were also highly critical of the punctuality of a pair of young German girls who were always late, and the last ones to get on the bus at the end of each stop.

Apart from the odd bit of culture shock, like this, however, I was pleasantly surprised about how well they adjusted to such a brave new world.  Amazingly, they encouraged my wife not to even visit them in Korea, but just to wait until they visited her in Australia, or even meet up somewhere else in the world.  My mother in-law, especially, has always wanted to go to Germany, a place where she dreamed of working as a nurse once (perhaps this is where my wife got her ambitions from).

Funnily enough, though, she doesn’t have much interest in visiting England, and my hometown in particular.  Curiously, this has a lot to do with my mother, who she feels slightly uncomfortable intruding upon, and is convinced that her daughter is not a good daughter in-law as well.  Despite numerous attempts to allay her fears on this subject, she is convinced that because my wife did not cook for her and clean the house when we were there (and knowing her character generally), my mother must think ill of her for bringing such a rotten daughter in-law into the world.  The truth being to the contrary, that my mother thinks my wife is lovely, and surely wouldn’t harbour such thoughts against her mothering skills, and would certainly be delighted to be a host if my mother in-law ever chose to visit.

The only problem for my wife is that her brother misses out.  He, like many thirty-something Koreans, is tied to a job with a scant amount of holiday time, if any at all, so visiting Australia, or indeed almost anywhere overseas except China and Japan is extremely difficult.  I think he really misses his sister.

It seems though, as if both my in-laws have caught the travel bug now, they are keen to visit again and to as many countries as possible.  With this in mind then, I am sure I will get my wish, and see them out of their comfort zone for myself in the near future.

Note:  This is a delayed post, as I forgot about it completely.