In case I haven’t really explained it yet, each month at the magazine, we chose an ingredient and visit a farm that produces that ingredient, in a region that’s famous for that ingredient, and a restaurant (or two) that specialize in Korean dishes that feature the ingredient. This is the basis for the article I write – farm to table, an introduction to Korean food from a foreign perspective.


In case I haven’t really explained it yet, each month at the magazine, we chose an ingredient and visit a farm that produces that ingredient, in a region that’s famous for that ingredient, and a restaurant (or two) that specialize in Korean dishes that feature the ingredient. This is the basis for the article I write – farm to table, an introduction to Korean food from a foreign perspective. 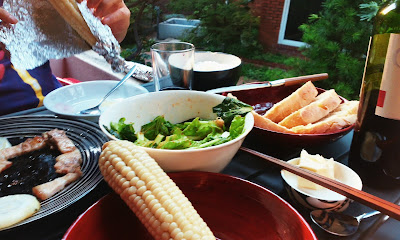 This month’s trip hasn’t even happened yet, but I’m already somewhat captivated by the subject, simply because Asian waxy corn vs. Western sweet corn seems to have the internet pretty divided. On the one hand, forums and message boards for Western foreigners in Korea are full of venomous ranting about waxy corn not being fit for human consumption, where as 찰옥수수 (glutinous corn) is considered the best in Korea. While foreigners are exchanging tips on where to find sweet corn on the cob in Korea, forums based in the States are full of Asian Americans swapping information on where to find the waxy corn they grew up with.
We all know that weird and wonderful things can happen when immigrants bring their native culinary habits to a new country, where the locals adapt the dishes to fit their tastes, and fusion food is born. Italian pizza and American pizza can’t be said to be the same food, and even regional preferences within the same country can eventually come into play – see Chicago vs. New York.
What’s interesting about waxy corn is that it’s an example of the same thing, but in a form that’s been occurring for a long time before trendy fusion restaurants were a thing. Essentially, corn was carried to China in the 16th century by the Portuguese who found it in the Americas. The Chinese took the crop and bred it over time to match their own taste – it’s not surprising that a rice-based culture would breed for glutinous qualities. From there, the waxy variety spread across Asia. This is considered to be the “real” variety of corn here, while the sweet, bright yellow stuff that comes in cans isn’t good for much other than an added flavor in side dishes, sandwiches or – another sore spot for Westerners – on pizza, the Korean version, which isn’t as different from the American version as the American version is from the Italian, frankly.

What I found most amusing about this casual pre-article research is just how angry people on both sides get about the opposing camp’s idea of what makes for good corn. A lot of comments on both side referred back to childhood and, especially, summer. Of course, I have my own memories of the juices from grilled corn dribbling down my chin in the backyard. But my real emotional association with the food is even more regional than that – it’s cornbread, which I also ended up reading a lot about once I found myself starting to crave it while reading about corn. Specifically, I was annoyed that, while I can go out and buy cornbread in Korea, both Korean and foreign, it will either be the soft, fluffy, slightly richer version of white bread produced in Korean bakeries, or the overly sweet stuff the foreign barbecue restaurants I know of produce. Which is not right. American cornbread is not sweet.

I found that this preference, too, has its own background story. Apparently, the shift from stone milling to roller milling in the south caused the corn to lose a lot of the kernel and, with it, a lot of the resulting cornmeal’s flavor. To cope with the new meal’s flavor and texture, cooks began to doctor original recipes with things like sugar and wheat flour.
Et voila. Skillet-sized corn muffins for everyone.
On the other side of the coin, there was the time B brought back a loaf of bread with little kernels of corn stuck all through it from the corner bakery for me to make French toast with. I generally take Korea’s variations for what they are. I try not to compare them too much to what I’m used to, and I quite enjoy 옛날 빵 in all its forms – they’re no less valid than any other kind of food, as long as you look at them as their own thing. But I draw the line at corny French toast.
What’s funny to me is how generous I can usually be with Korean variations on foods that I have some personal stake in, while I’ll be ready to go ten rounds with anyone from the next state over who screws around with foods I grew up eating at home. Maybe that’s how the people calling 찰 옥수수 ‘cattle feed’ on the internet forums feel (to be fair, it is actually used as cattle feed in the US). But as for me, I think I laid that cross down the first time I bit into a stuffed crust pizza to find my mouth full of mashed sweet potato. Some battles are just not worth fighting. Sometimes it’s better to just let it go.

In other news, I went to the National Museum of Korea for the second time in a week today. We’re preparing to do an article about it, celebrating the ten-year anniversary since its relocation to Yongsan. Today, a coworker and I met the director and were given a tour around the museum, which definitely made me appreciate it a little more. Prior to today, I had never noticed the little icons on certain displays that read “AR Tour,” but it turns out, if you download an app and situate those displays in the center of your smartphone screen, some pretty cool features pop up. You can listen to the sound of a Goryeo bell or examine celadon pieces in much more detail than the dimly lit gallery allows.

I snapped just a few photos, two from the Hangeul Museum and one of Lady Hyegyeong’s memoir, which may be my favorite Korean book. 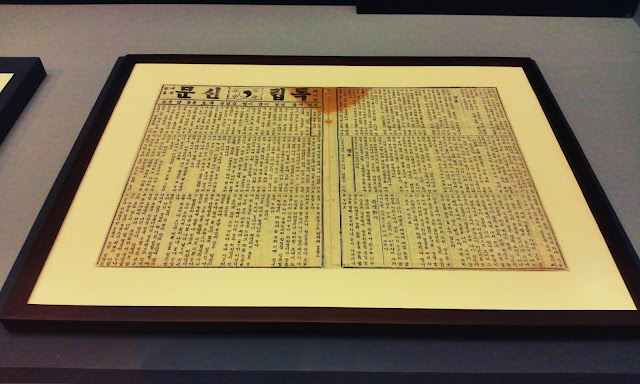 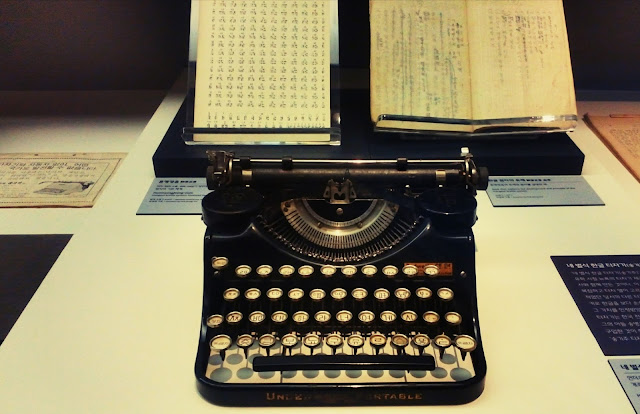 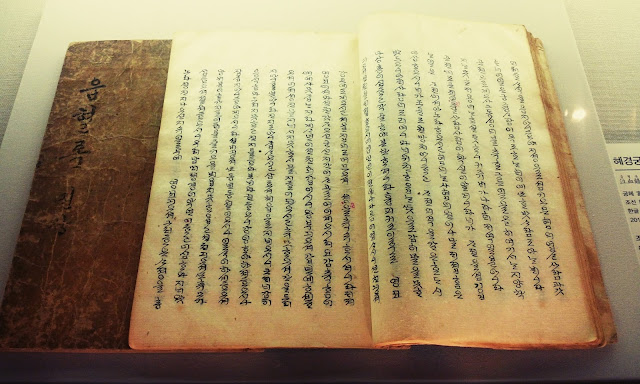 I made off with a bag full of dorky swag from the various directors, who were all very kind. I’ve actually met the director of the foreigner activities before, although I’m not surprised she didn’t remember me — we first met last year, right after I’d entered language school, when we took a class field trip. She thought that was funny, but it caused me to pause for a moment and realize how far I’ve come in the past year. If you’d told me then, when I was struggling through the first exams I’d had in years and still trying to get over my eternal shyness about speaking Korean out loud, that I’d be sitting in on a meeting with her to discuss an article my magazine was working on, you’d have been blown away by the force of the laughter.

It’s easy to get dragged down into the daily routine — the pitches I have to somehow finish by the end of this week, while reviewing the final color prints for the August issue, the trip out of town on Monday for the article, followed by a possible late night at the printer on Tuesday. The article I then have to crank out by Friday while also doing the first round of editing on the articles I’m in charge of, before the deadline period starts again the following week.  All of the other things I wish I could be doing, all of the time. But sometimes, a fragment of the past glimmers in front of my eyes for just a moment, and I feel grateful, and just a bit proud.