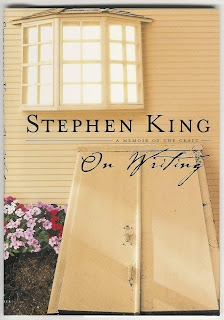 I have never read a lot of Stephen King, and his literary merits can be argued, but I would wholly recommend his 2000 book, “On Writing,” part memoir, part practical writer’s tool.

I have never read a lot of Stephen King, and his literary merits can be argued, but I would wholly recommend his 2000 book, “On Writing,” part memoir, part practical writer’s tool.

I can relate. Although, when I was submitting stories back around 2000, 2001, and I got rejection letters, I usually got pissed that they had failed to see my obvious genius and threw them in the trash. The nerve!

Today, it’s a little different. First of all, it’s all e-mail, which can be good and bad. Good in that it is easier (and cheaper) to get more and more story pitches, queries and such out there. Bad in that it can be very easy for editors to ignore my pitch or simply forget about it amidst a swelling pile of spam.

The situation reminds me of when you call someone on their cell phone and they do not pick up. But, it’s a cell phone, you think. It’s in your pocket! You must know I’m calling you, so obviously you are screening your calls and don’t want to talk to me. At least, that’s how it feels in the heat of rejection.

It feels the same way when you pitch and pitch and pitch and you don’t even get a “we’re not interested.” One national health magazine was very prompt in that regard, and I have the utmost respect for them for that. A regional magazine an associate had referred me to and had put in a good word for me on responded once, saying they were interested in hearing my pitches. I pitched and pitched and never heard from them again.

People can be busy, of course. Deadlines, life in general can certainly send someone you have never worked with before to the back seat. But if I am not being rude about it, I would hope you would return the favor. Or be rude. Give me the Internet equivalent of a middle finger. Give me something, preferably an assignment. And money. The whole thing can certainly demoralize the up-and-coming writer, especially when they see other writers, of greater or lesser-than writing acumen, that you have appeared alongside already also appearing in other magazines you pitched to but never got a response. Yes, the whole thing, whether it’s being busy or being a jerk, can wear a person out and make them just want to work at the farm market all day. That wouldn’t be so bad, now would it? The cheese is great.