It’s Saturday morning here. It seems as though I am still exhausted from our trip to Japan. We went to Tokyo for four days during Chuseok (Korean Thanksgiving). Four days proved to be the perfect amount of time for an introduction to Tokyo. We were able to do all of the things that we had talked about before the trip and more. Here is a short recap of the trip highlights and thoughts about Japan.

There are bicycles everywhere. It was fascinating to see so many bicycles and bicycle “parking lots”. It is really awesome that so many people in Japan use bicycles for transportation!

It’s Saturday morning here. It seems as though I am still exhausted from our trip to Japan. We went to Tokyo for four days during Chuseok (Korean Thanksgiving). Four days proved to be the perfect amount of time for an introduction to Tokyo. We were able to do all of the things that we had talked about before the trip and more. Here is a short recap of the trip highlights and thoughts about Japan.

There are bicycles everywhere. It was fascinating to see so many bicycles and bicycle “parking lots”. It is really awesome that so many people in Japan use bicycles for transportation! 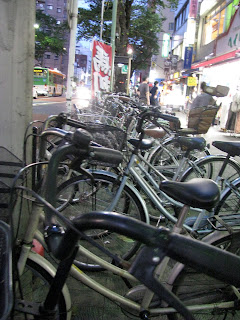 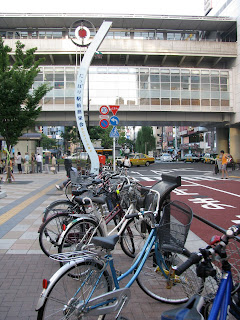 7eleven and Family Mart are the best! They have everything that you need from International ATM’s to sunscreen to quick and cheap meals. They are awesome convenience stores located on every block in Japan (and Korea and Thailand)!

Toilets in Japan are fancy (wow I sound like a hick saying that)! And it seems that it doesn’t matter if it is a convenience store bathroom, public bathroom, or hotel room, you can get the special treatment for your behind. Our hotel toilet remote control (yes, remote control) instructions. 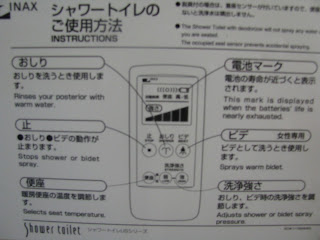 We saw a Giants game in the Tokyo Dome! It was a blast! Baseball is incredibly popular in Japan. There are beer girls that carry huge backpacks of beer around to sell. Each cup of beer cost 800 yen which is crazy expensive! ( 10.28 USD) 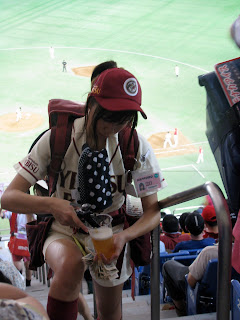 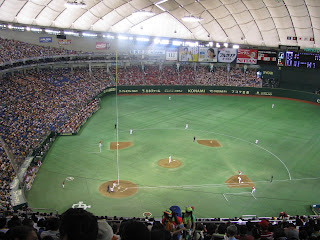 Our McDonalds “research” continued in Japan…..McDonalds tastes the same EVERYWHERE! (at least everywhere we’ve been so far….Korea, Thailand, Japan : ) 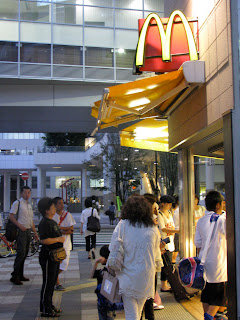 There are vending machines everywhere; on every corner it seems. They sell soda, coffee, water, and other beverages (no beer that we saw). It is pretty convenient and amazing that there are so, so many! They have supersized cola cans! 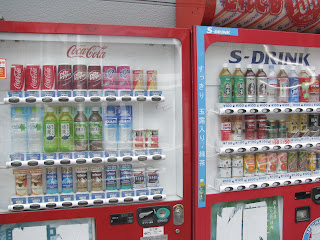 Japanese money was hard to adjust to after USD and Korean won. Some coins in Japan are worth 6 USD! Some small coins have holes in them. We made a mistake when we first arrived and spent 4,000 yen to get to our hotel. We thought, oh that’s really cheap (due to thinking about 4,000 won being about 4 USD) Actually 4,000 yen is 51 USD. Ouch! But, we quickly adjusted. 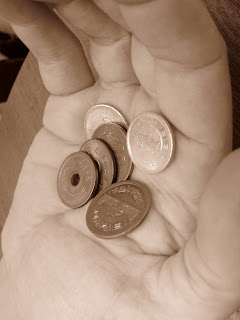 This coin is worth 6 USD! 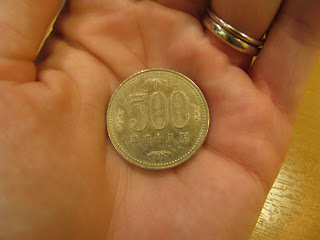 The food is incredible. Whether it be ramen at a fish market, dumplings in a small restaurant in Harajuku, or a three course appetizer in Ebisu it is all incredible. We wanted to eat everything, but there was just not enough time or money. 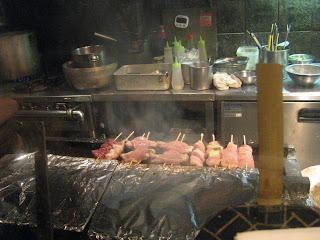 We had an incredible meal and experience on our last night (in Ebisu). Steve bravely approached two Japanese men sitting outside of an unassuming restaurant and asked where we could find excellent Udon and Sake. He directed us inside and ordered our meal in Japanese and then invited his friends and wife to join us for some good conversation. It was an incredible meal. The three course appetizer was a seaweed salad, baby tuna sashimi, and roasted chicken. Then we ate Udon that came in a small wooden basket with green onions and broth on the side for dipping and slurping. We also had half and half Sake (recommended by our new friend) which was half room temperature and half frozen. It was the perfect end to a great Tokyo vacation!

Our Udon and Sake 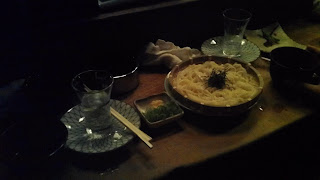 Japanese people are really friendly. There were numerous times that we were approached by Japanese people that wanted to assist us with directions or if we were close to a touristy site they would point us in the right direction and say “fish market” or the name of another place/site.

I felt more at home (as in U.S.A. home) in Tokyo during our short trip than I have ever felt in our eight months in Korea. I’m not sure why but I just felt more welcomed there and like I belonged there more. Maybe it is because it is such a global city or more Westernized. Or maybe it’s the people. I’m not sure but I really didn’t want to leave.

We got to see a traditional Japanese wedding procession at Meji Shrine. It was really beautiful and something that I had hoped to see. The Shrine and the Meji Garden were very peaceful and pleasant. It was hard to believe that we were still in Tokyo.

Hello I’m in your wedding photo! 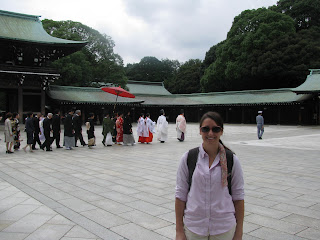 There are many green areas in Tokyo that provide some quiet and solitude and an escape from the bustle of the city. I was really amazed by this as I had just expected skyscrapers as far as the eye could see. 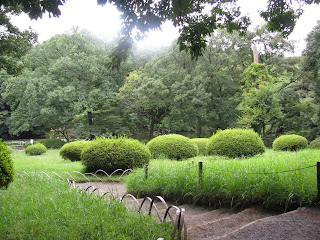 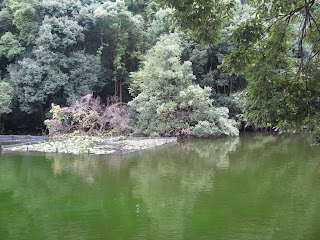 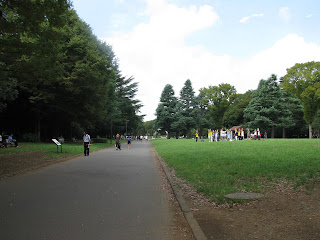 Watching Sumo was my favorite part of the trip. It is something that I never dreamed that I would get to see. I had so much fun. It was such a unique and awesome cultural experience. 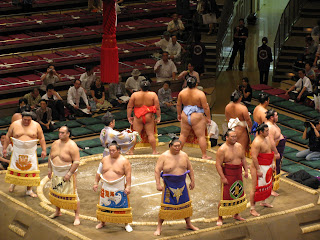 We went to the New York Bar in the Park Hyatt Tokyo. You may know it from the movie Lost in Translation. All of the hotel bar scenes were shot there. We sat at a table by the piano. The view was incredible. Bright city lights and tall buildings stretched for miles. It didn’t even look real. We tried to take some photos inside and of the view, but just couldn’t do it justice. We just had to sit back and take it all in. It was breathtaking. 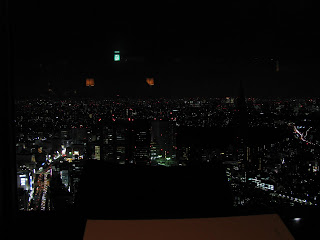 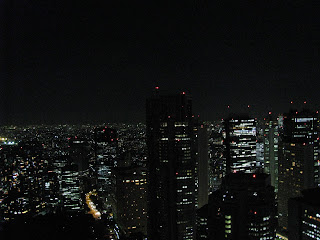 Also featured in the movie Lost in Translation is Shibuya Crossing and we went there as well. It was a crazy, yet organized crossing of what seemed like thousands of people each turn. We crossed a few times just for the experience. Shibuya was also an excellent place for people watching and witnessing some of the crazy and amazing fashion of Japan. 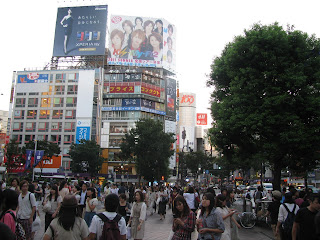 We saw some Harajuku girls in the subway station. We also saw a lot of interesting fashion in Japan. I really admire Japanese people (mainly women) and their individuality when it comes to fashion. I didn’t see two people dressed even remotely the same in Harajuku or Shibuya. It seems as though anything goes and you create your own trends. I love how it is so different from home where everyone thinks that they have to wear same exact thing as everyone else to be “fashionable”. The Japanese seem to have it figured out with fashion: individuality!

I ate the best ramen and the best dumplings of my life. The ramen were ordered outside of the Tsujiki Fish Market and consumed at a street side counter while standing. The think slices of tender pork were so melt in your mouth delicious and the broth and noodles were so much better than any ramen I’ve ever had. Also, we went to a small restaurant in Harajuku. There was no sign outside, a line to get in, no English menu, and all Japanese people inside. These things always tell me that the place is a winner! And it really was. We just ordered what everyone else had: cucumber salad, original fried dumplings, and chicken soup with rice. The dumplings were so good that we ordered a second plate. They were melt in your mouth delicious, perfectly browned on the outside and so juicy and flavorful inside. I wish I could have about three more plates right now. They are worth traveling to Tokyo for! 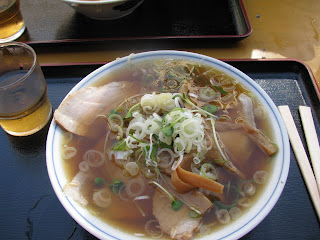 Dumplings and menu in Harajuku 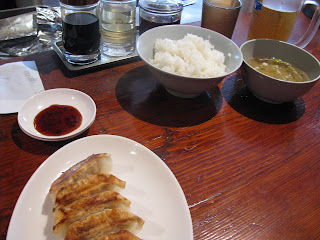 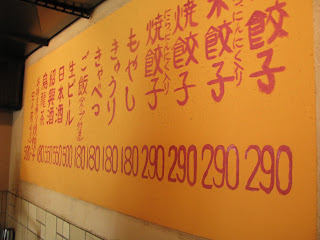 So I guess that about sums the trip up: Awesome fashion, friendly locals, great transportation, beautiful parks and shrines, awesome sporting events, and delicious food! TOKYO