My hiking group does these trips identified as overnighters. Don't get the term confused with a weekend trip, say, departing on a nice Saturday afternoon, staying in a hostel/motel/hotel, a brisk hike the next day and then going home in the early evening. No, they are definitely not that. Instead, they entail meeting at a rented bus at 11:30pm on a Friday night (after a full days work), traveling 3-4 hours in the night/"sleeping," and starting a climb up a mountain at 3-4 am in the dark. The hikes will last 12-16 hours and we'll head back for home late in the night.

My hiking group does these trips identified as overnighters. Don't get the term confused with a weekend trip, say, departing on a nice Saturday afternoon, staying in a hostel/motel/hotel, a brisk hike the next day and then going home in the early evening. No, they are definitely not that. Instead, they entail meeting at a rented bus at 11:30pm on a Friday night (after a full days work), traveling 3-4 hours in the night/"sleeping," and starting a climb up a mountain at 3-4 am in the dark. The hikes will last 12-16 hours and we'll head back for home late in the night.

I have a love/hate relationship with these overnight trips. ZZZzz on a bus just doesn't happen for most and so, realistically, you are pulling an all nighter and then climbing a very difficult mountain on no sleep. It's insane, but the internal and physical strength you gain from completing such a trek outweighs the tribulations. You sweat, swear, sometimes cry, curse the mountain for being so damn steep, wonder why Koreans hike almost directly up a mountain instead of at a steady incline, and sometimes want to quit. But you get through it. Sometimes it feels like just you and the mountain and other times you are leaning on or being leaned on by someone else in the group. It's emotionally, mentally, and physically exhausting and for that, rewarding.
I took two of these trips to mainlands Korea's tallest and most difficult to get to peaks in just a little over two weeks.
What doesn't kill you, definitely makes you stronger.
Seoraksan and Dinosaur Ridge
We started the hike at about 3:30am. Human traffic was pretty much stop and go for the first couple hours. It's the most popular time and place for seeing the changing fall colors of Korea's beautiful maple trees and I knew this, but I was still shocked to see this many people on a mountain. When it started to get light, though, I understood; The colors and view were absolutely breathtaking. 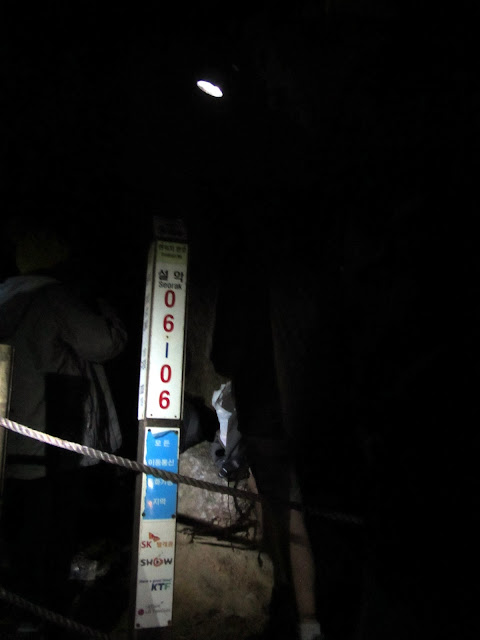 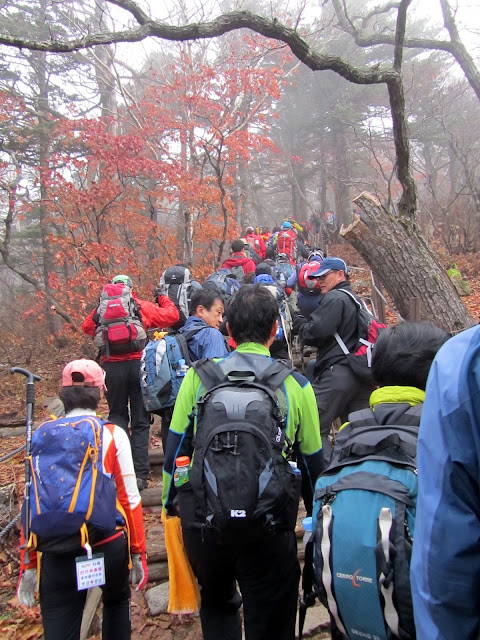 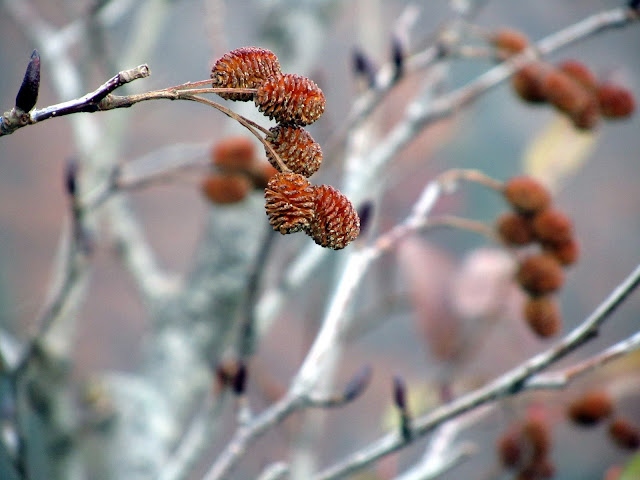 There were three of us that kind of grouped together for the hike: Claudia, Seongmin, whom we had just met, and myself. We were having such a great time chatting it up and taking photos, we found ourselves a bit behind from the rest of the group. It didn't bother us until we had made it to the top of the mountain and then to the shelter where we were to decide to take either the shorter descend or Dinosaur Ridge, a much longer and more difficult ridge hike over a shape similar to that of stregasauraus's back. Despite there being an advisory not to start Dinosaur Ridge for the purpose of time (it being later in the afternoon), our leader still encouraged (err, kind of forced with our best interest in mind) us to take the trail. He kindly agreed to wait for us at the intersection where we'd descend..
We completed the ridge trek, the most difficult trail at Seoraksan in just about 3.5 hours. By that time, we were beat, but to our surprise, still had at least least a 4 hour descend. Total we hiked 16 hours and 24km (~15 miles). We experienced sun, rain, wind and fog- literally and metaphorically. I cried at the end. 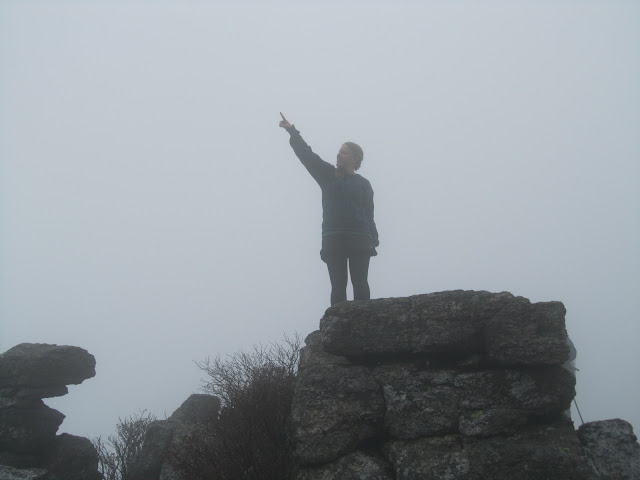 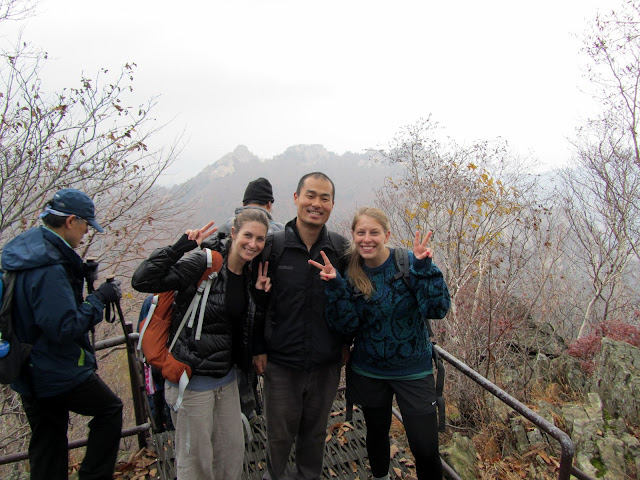 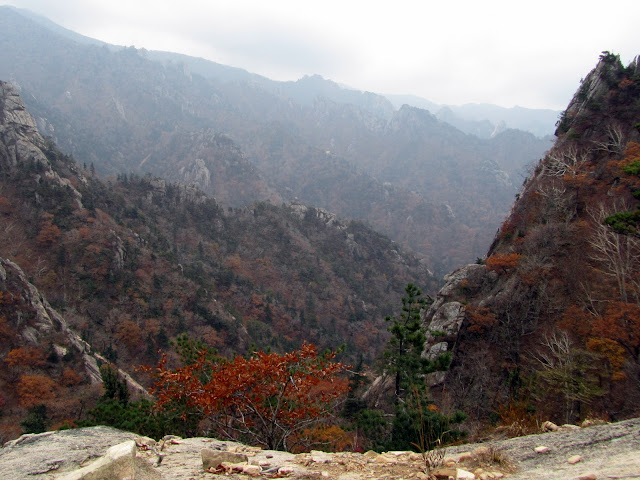 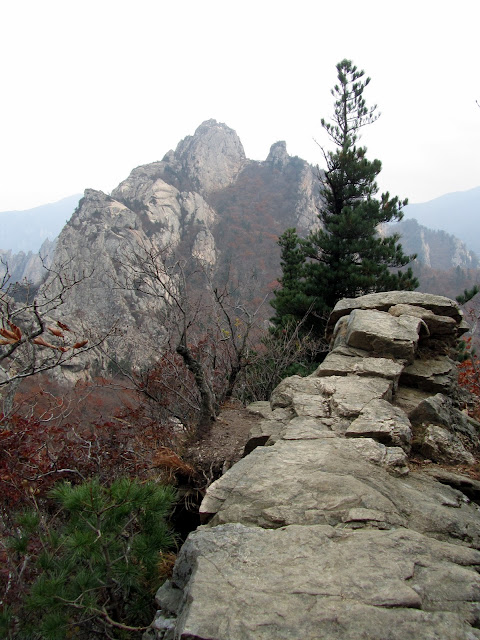 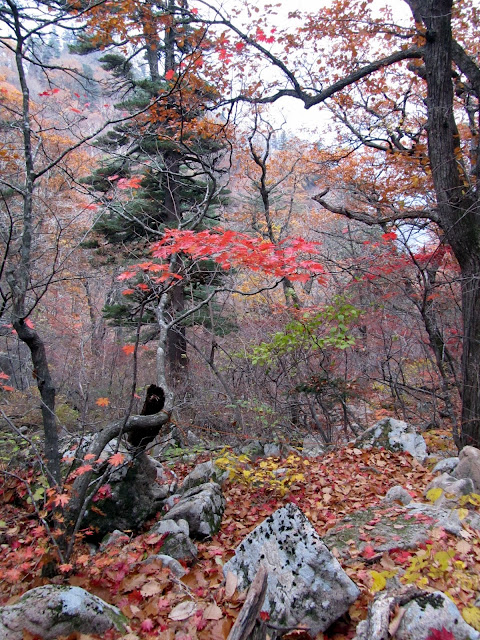 Jirisan, Halloween Weekend
Jirisan was a whole different story. It was long and hard, sure, but I didn't feel that sense of danger and fear that resulted from being behind on the first trip. There was no rushing to catch up to anyone because, for the most part, we stuck together as a group. Or maybe it was that I had already done the trip (exactly one year ago) and sort of knew what to expect. Anyway, I felt a sense of peace from start to finish.
I'm really happy I went. Since I had already done it and it's Halloween weekend, myself and some friends had decided to skip and do the whole dressing up/going out. Last minute, though, myself and my dear friend, Claudia, changed our minds. I knew I'd regret missing it. I was kind of sad to miss dressing up, but to compensate for the Halloween loss, I brought a bunch of foam pumpkins for us to pin on our backpacks. I'm getting old…
Friday night, some of us met a little earlier than 11:30pm for some dinner, later loaded the bus and we were off. The hike started at about 4:20am and we reached the peak at 9:00am. Not too shabby a time! And unlike last year's Jirisan hike, there was no rain! Nothing but clear skies and beautiful colors. I'll never forget the view of the reds, oranges, browns, and greens against the bright blue, slightly clouded sky. 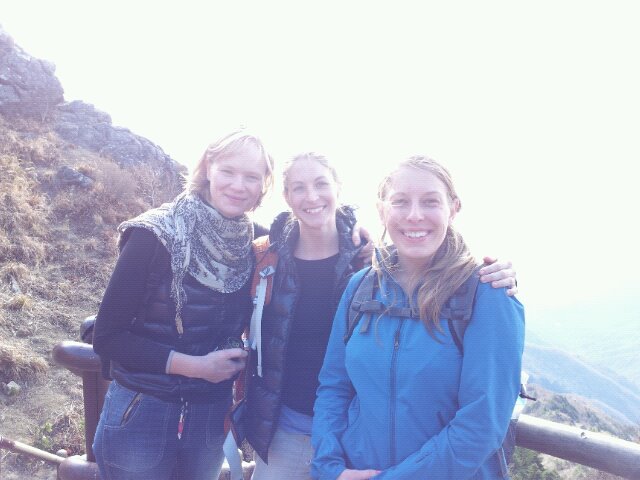 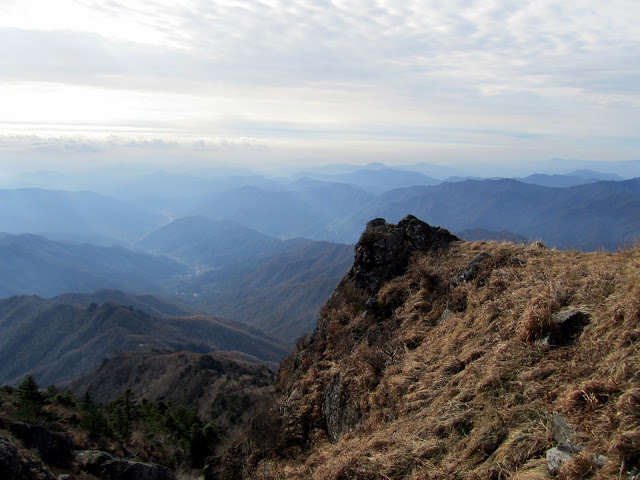 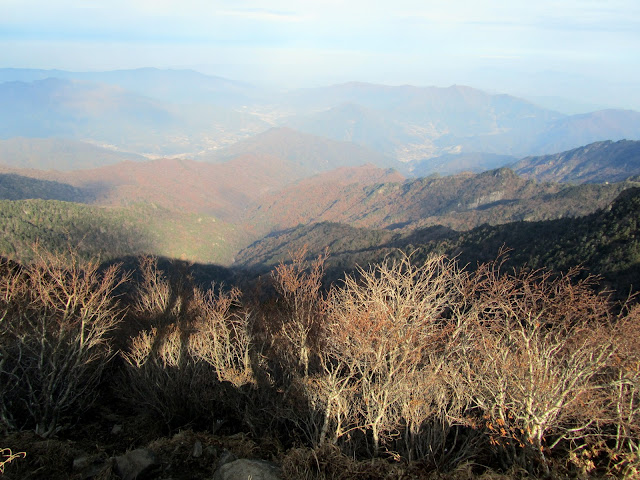 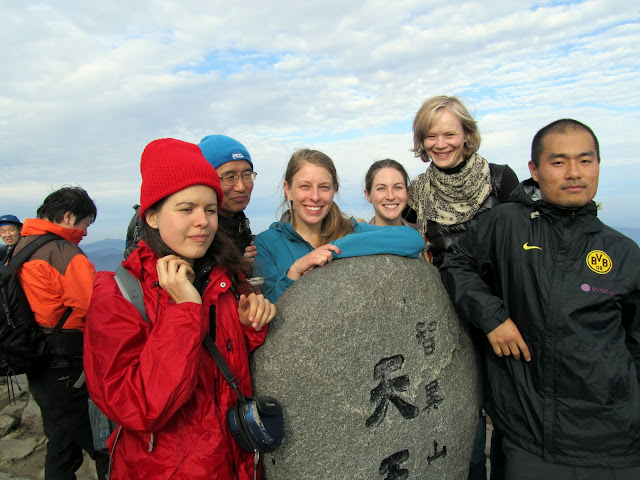 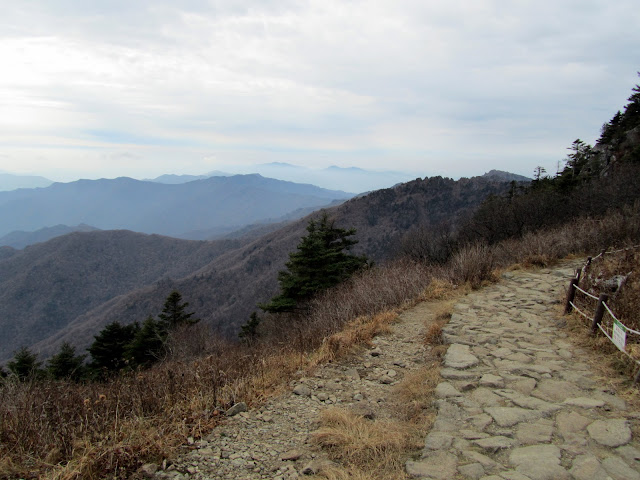 After the peek, we headed for a shelter to eat lunch. There was to be two different choices for the descend: the shorter trail or the longer one. On the way up, I made the decision to take the shorter one. It wasn't that I didn't think I could do the longer one, but I was still feeling a little beat up from Searaksan. By the end of lunch, I had changed my mind and joined the 14 other crazy heads. Mr. Kim, the leader, boasted that the longer one was only that, longer, but not steeper or more difficult. The gears in my head started to shift. Claudia had mentioned on the way up that she thought she would do the longer one since we're here, anyway. Both her and Mr. Kim got to me. I did the longer one and am extremely grateful they convinced me. 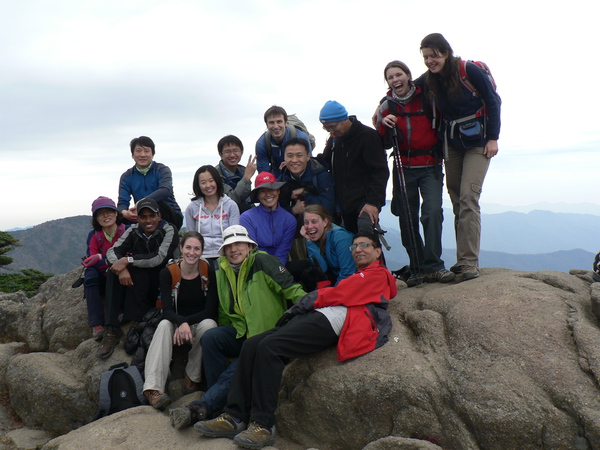 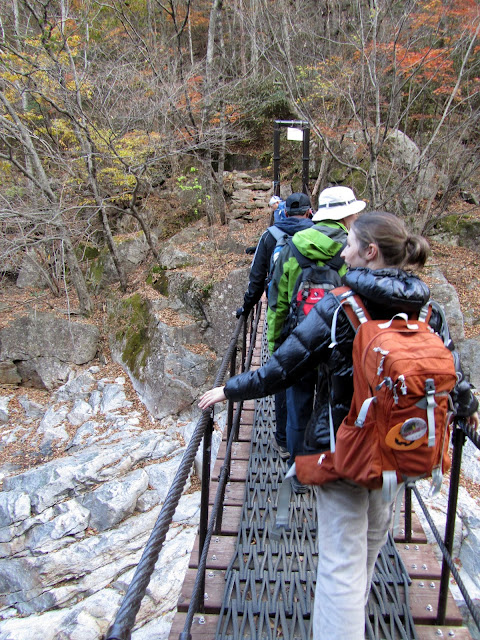 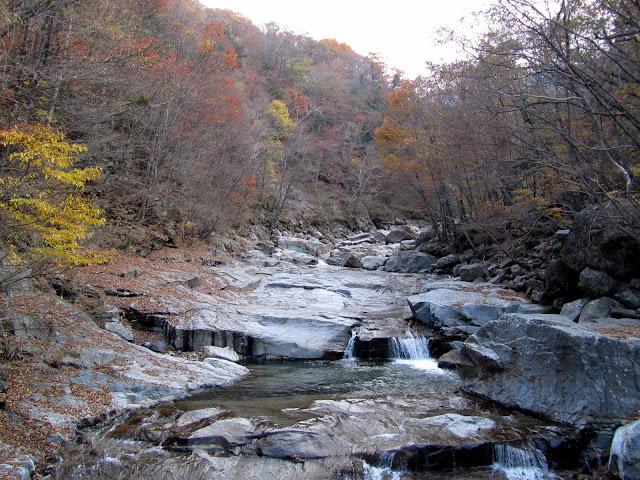 Hope everyone else had a great Halloween weekend!