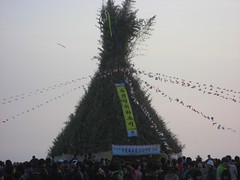 A large crowd gathered around a sixty-foot bonfire on a waterlogged beach, tents on the ground nearby, kites in the air, Korea’s famous health and safety culture. What could possibly go wrong?

A large crowd gathered around a sixty-foot bonfire on a waterlogged beach, tents on the ground nearby, kites in the air, Korea’s famous health and safety culture. What could possibly go wrong?

‘보름’ (‘Boreum’) is the term given to the fifteenth day of each lunar month, and yesterday was ‘정월 대보름’ (‘First Month – Jeongweol – Daeboreum’) – one of two most important of all the fifteenth days (the other being ‘Chuseok‘), because it was fifteen days after the Lunar New Year. Traditionally, it is a day to cast out evil spirits, assuring a healthy and prosperous year ahead, and for some reason, this involves eating a particular breakfast of special rice, vegetables, tofu, walnuts, and alcohol. I had a little of each except the alcohol, which was oddly absent. Korean Mother then went up a mountain to a temple to help cast out the evil spirits, another tradition on this day.

A further tradition comes in the evening of ‘Jeongweol Daeboreum’, and it’s known as ‘달집태우기’ (‘Daljibdaeugi’), which approximately translates as ‘the burning of the moon house’. This involves building a large bonfire which, if successfully burnt all the way through indicates a good harvest in the autumn. However, if it should be extinguished part of the way through, this means a poor harvest. You can read into this that the bonfire builders have a vested interest in making sure that the design ensures not just a mere fire, but preferably an inferno. Bamboo is placed inside, which makes a particular cracking or popping sound when burnt which was also believed to drive out or scare off all the bad spirits from the village. While the fire burns, people can pray to the moon for the casting out of the spirits.

We arrived with friends to Dadaepo Beach’s Jeongweol Daeboreum Festival to find a crowd of around two-thousand or more already gathered. It had been a spur of the moment to go, and as such, nobody was very clear on the itinerary. The sun was setting and the event was already in full swing. Drums beat, Korean singing blared out over a public address system, a large number of kites were flying in the air, along with a couple of powered paragliders who probably weren’t part of the festivities but had a grandstand view of the barely organised chaos that was about to unfold. 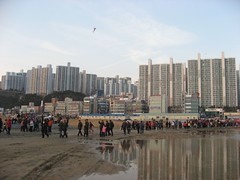 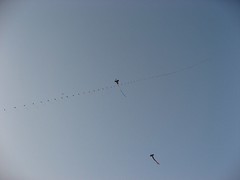 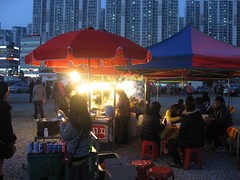 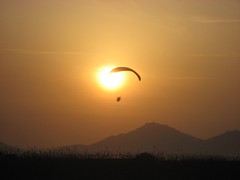 Sensibly, the bonfire – or three bonfires actually as it transpired, one large and two smaller – had been placed fairly far out on the beach, but this meant negotiating various heavily waterlogged areas to get closer to it. An area of potential quicksand had been roped off, and wooden pallets had been put down in some places acting as makeshift bridges. We were prevented by bodies of water and people crowding the drier bottlenecks from getting much closer. Our view was slightly obscured by a number of tents but it wasn’t a bad compromise, and it also proved to be safer. There seemed to be a stage inset into the largest planned bonfire but it was difficult to see from where we were. 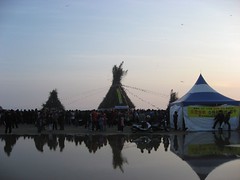 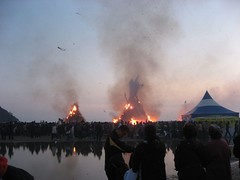 At 6.30pm the fires were lit. They mainly comprised of carefully arranged vegetation and bamboo which were clearly designed to burn quickly. Kites were still flying in the air, and the many streamers containing the flags of all nations still linked the bonfires to each other and the ground further away. The fire quickly took hold, and an uncomfortable wave of heat hit me even though I was stood some distance away. The streamers broke away with their national flags burning, most falling to the ground, but two seemed to fly into the crowd to the front and the right of the bonfire, causing people to move away quickly. The air was filled with the cracking sound, and a large cloud of ash and burning embers shot up into the sky… and then began to fall on the assembled onlookers with increasing ferocity.

People on the other side of the pool that had stopped our progress began to run left and right, hampered from an easy escape by the water. There was screaming. “Move Away! Move Away!” shouted the announcer. A lot of the people in our area started walking away quickly towards the shore, our friends among them. Foolishly, I remained steadfast where I was, up to my ankles in water by this time, my increasingly cold feet fortunately protected by my boots. The ash rained down on us as if we were witnessing the last day of Pompeii – the video I took hints at it but hardly does it justice. I had to stop filming when a burning ember landed on my shoulder. Remarkably, none of the tents caught fire. A solitary fire truck was parked further up the beach, but between the crowd and the waterlogged sand I couldn’t imagine what they could have done.

Two elderly women near who’d bravely stood their position then turned in my direction and started bowing in prayer towards the full moon behind me. The crowd had thinned out considerably when the fireworks began a few minutes later, and perhaps even that was just as well – they exploded low overhead and smoking remnants could be seen f on the people below. Ten minutes after that it was all over, aside from the burning remains of the fires, and we were heading back. 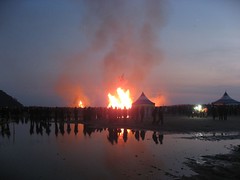 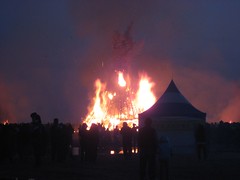 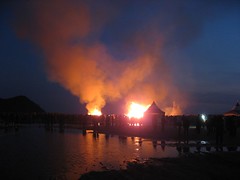 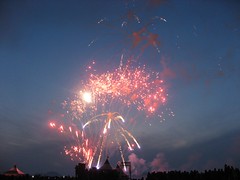 Now that we know no-one was injured, it’s easy to look back and laugh at the absurdity of it all, except that a year or two ago a number of people died at a similar event on a mountain in Busan, and after what I saw, I can understand why.