Sunday was the day of our friends’ wedding, and it would be the first ceremony I’d attended in Korea where I was merely a spectator, rather than a participant. Surely being on the other side of the fence would be less stressful? Maybe not so much.

Sunday was the day of our friends’ wedding, and it would be the first ceremony I’d attended in Korea where I was merely a spectator, rather than a participant. Surely being on the other side of the fence would be less stressful? Maybe not so much.

Suiting Up
My wife and I were scheduled to meet the bride and groom at the wedding hire store early in the day, where we would presumably offer any moral support that was required. Also attending were the bride’s mother in her hanbok, her brother clutching a camera, and the groom’s ‘junior’. The whole subject of Korean male hierarchies is one which I haven’t fully understood, but suffice to say that formal relationships are bonded in universities and the army during national service, out of which come a complicated, but individually and specifically defined network, of seniors and juniors through which a lifetime of social responsibilities and obligations will follow. This was one of those times.

The bride’s Korean Mother can’t get her hanbok quite right despite numerous adjustments, and the bride herself has long since disappeared for her preparation, but aside from this the atmosphere is relatively calm in the waiting area, and good natured banter is exchanged back and forth between the groom and the others. I can only follow bits of the conversation – enough to sometimes guess at the context – and understanding the humour is out of the question, so before long I’m probably the second most stressed person in the room. When the bride is finally ready, we decamp in some haste from the clothes hire store to the wedding hall, which is probably about a mile away. This is when we discover that due to a slight failure in planning our attendance, there’s no space in the cars for us, but fortunately the store owner kindly offers us a lift.

Dunkin’ Donuts
The Wedding Hall is in the middle of Seomyeon, within a tall building in a narrow and busy commercial street several floors up above a branch of Dunkin’ Donuts. We’ve rejoined the entourage in the street and when we make our way up the building to emerge chaotically from an elevator it is to be greeted by the sight of a large hall from which several separate wedding rooms open up – some large Western church-style affairs, with aisles and faux alters, and some Korean in the style of small traditional rooms. The reflections of disco lights are beginning to improbably roam the walls of one of the rooms, making it look not so much like a wedding as the beginning of Logan’s Run 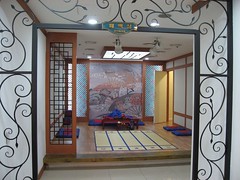 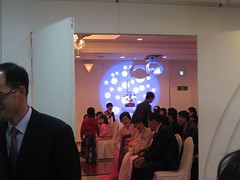 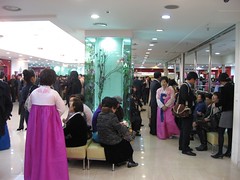 I am lost in a sea of Koreans, most of whom I don’t know, but some of whom perhaps I should – the problem is it’s impossible to tell who belongs to which wedding. There are suits, hanboks and mobiles every direction I turn. I’m suited up too – not a look I’ve promoted for myself in this country, but even though this may be radically different from my everyday thirty-something clothing style, I stick out like a sore thumb.

So I’m immediately recognised and greeted by people who look so radically different in their make-up and clothing I have trouble remembering who I’m supposed to know, and how well. This is important because one needs to say the right greeting based on familiarity – who I am saying annyeong haseyo ‘안녕하세요’ to and who simply gets a more casual annyeong? Inevitably, it isn’t long before I make a mistake and slight someone who I haven’t met before but who I greet as though I had.

Additional rooms provide areas for photos before the ceremony, and it was in one such room that the bride cries ruining her make-up. So with five minutes to go before the ceremony is due to begin, a team of helpers are working on her with all the fervour of a formula one pit crew. A disaster is very narrowly averted. As we rush towards the designated room, buffet vouchers are thrust urgently into our hands from the bride’s family like they are some form of contraband, which later turns out to be not so far from the truth. 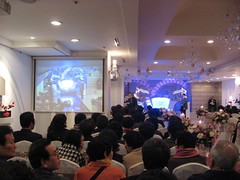 Because we’ve been otherwise engaged the room is full when we get there, and as there’s no designated seating we have to stand at the back, which seems a bit off – especially when my wife holds the semi-official title of ‘matchmaker’ to the couple. The bride enters shortly after us, and her immediate family have to fight their way through the chaos we are now part of. We end up watching quite a lot of the ceremony on a cheap screen, which has thoughtfully been provided for the cheap seats, although judging by the loud talking that goes on constantly through the entire ceremony, I think it is a wasted effort.

Food Beats Wedding
But the crowd did thin out – as did the initially crowded seating. Ten ajeossis and ajummas had left before the bride and groom had finished walking down the aisle with its illuminated fake rose petals and the music had abruptly stopped. Before the ceremony has finished, I roughly count around another thirty out, and those are just the ones I saw – because it wasn’t long before I could take a seat and get away from the pub crowd behind me. I’m still perplexed by this incredible display of rudeness, and am no less staggered by it when it is explained to me that the people leaving are heading for the buffet. Apparently, this is very common in Korean weddings, and unlike with a Western wedding it’s the back seats which are coveted, not the ones nearest the front – as these allow a quick getaway from the ceremony. I learn later that the bride’s mother has apparently had to cajole guests to move forward before we arrived. 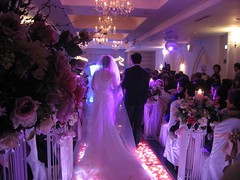 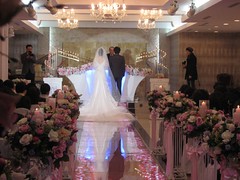 The groom plays his pan flute as part of the ceremony – and for the first time this quietens down some of the talkers. The boyfriend of one of the bride’s sisters has announced his intention to sing as well, and we brace ourselves as he lifts up the microphone, but actually he’s… quite good. There are rounds of photos – cut short by the next wedding party angrily trying to claim the room – and a Korean wedding ceremony to go, which few people attend as it’s in one of those small traditional Korean rooms, and is really just for the families and a few onlookers. The bride and groom have to change into their traditional costumes – complete with a bizarrely uncomfortable (I speak from experience) square metal belt for the groom – so there is a lot of waiting around. 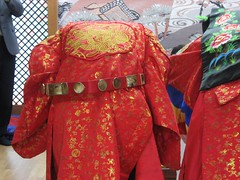 Lost in Buffet
We reach the buffet at 2.30pm, by which time those first ten people – who left as the bride and groom walked down the aisle – have an hour’s head start on us. Not that this means that there’s no food left; it’s a big place catering to multiple ceremonies and the buffet is rolling. Much as there were several wedding rooms around the main hall, there are several eating areas off from where the food is provided – but with no guidance on where anyone should sit, the guests from the various weddings are hopelessly intermingled. By some chance, we are found by two other friends of the bride and groom who will probably be the next to marry, and then by the happy couple themselves, so some of us actually manage to eat together.

Over the lukewarm food I’m asked about British wedding traditions by the girl I’d slighted earlier. I got as far as explaining how we tended to marry in churches rather than wedding halls – which felt a bit like a wedding factory with four or five ceremonies going on at once. But I didn’t manage to get far enough into our hybrid English-Korean conversation to explain that when we get married in church, that’s when you’re really married. In Korea, it’s just a ceremony and the actual legal act of marrying is done in a local government office. Our friends won’t do this until they return from their honeymoon in the Philippines – so technically they’re still both single… 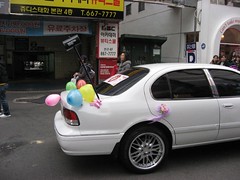 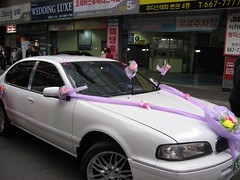 We escort the bride and groom out to the wedding car, complete with Kartrider inspired ‘100ton’ aerial and windscreen wipers stuck out into the air – which thankfully weren’t turned on as they sometimes are with gloves on waving in celebration, and they unexpectedly offer us a lift home. So there we are – four of us crammed onto the back seat – which seemed a bit hard on the newly married couple, even if they’d insisted on it. At a junction, the lights are out and a soldier is directing traffic, but the situation is difficult. Our driver jumps out and puts the windscreen wipers down – ‘I can’t see anything’ he says, unsurprisingly. But he keeps the hazard warning lights on all the way home. 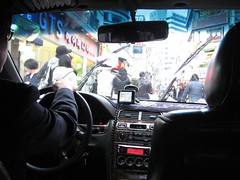 Despite the hazard lights and ribbons covering the car making it somewhat conspicuous, we are still carved up on the road twice on our way back, confirming that Korean drivers aren’t willing to spare anyone an accident, no matter what the circumstances.

The Work Is Just Beginning
It is around 4pm when we reach home, and for us, it is over. I’d struggled through the day trying to understand conversations and make myself understood, mostly failing and feeling all the more frustrated for it. By comparison, my own wedding ceremony three months after arriving in Korea seemed so much easier; I was merely a passenger with whom there were few expectations, and after our honeymoon in Gyeongju we went back to our apartment to get on with our lives. Our friends would be flying to the Philippines later, and after returning would spend their first night back at one parents’ house, and then the next night’s at the others’ as Korean tradition dictates, before finally moving into their new place together, and commencing a lifetime of new family responsibilities.