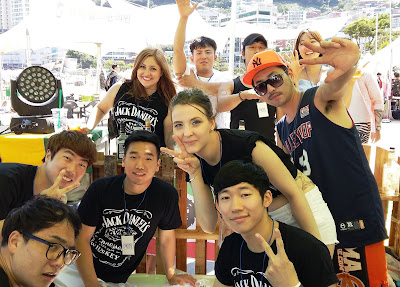 I’d like to preface this post with the fact that we have been VERY lucky in Busan.  We have had some rain and high winds but even that has not deterred us from heading to the beach and swimming in the rain.

I’d like to preface this post with the fact that we have been VERY lucky in Busan.  We have had some rain and high winds but even that has not deterred us from heading to the beach and swimming in the rain. 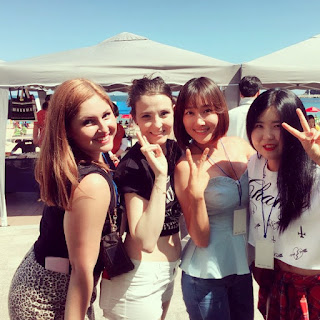 Living in Hwamyeong, we truly are Weekend Warriors.  We live in a bubble an hour away from most of the city centres or hot spots to see and be seen, so we refuse to spend our free time vegging out at home in the Hwammer.  This past weekend I decided to venture out of our regular crew and volunteer with the amazing staff of Yaman Joint at their fantastic Summer Beach Slam (throwback to Kingston and Princess St. summer 2006 Queen’s U).  It was our first sunny Saturday in…a month?  and we went out to Song-Do beach (a beach just a little way out from Nampo-dong – I think about 15 minutes by cab?) where there was an awesome rasta bar set up and a bunch of independent vendors showing everything from jewelry, to clothes, to longboards, coffee, and other knick-knacks.  A cross-fit gym from Nampo was doing awesome demonstrations and there were even pole dancers.  We had a variety of DJ’s playing, K-POP dancers, acoustic performers, and even a high-energy saxophone player which reminded me a lot of my time at Joseph Richards in Vancouver. 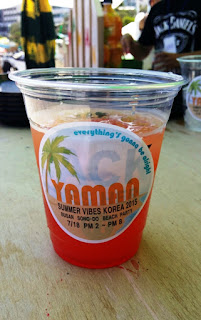 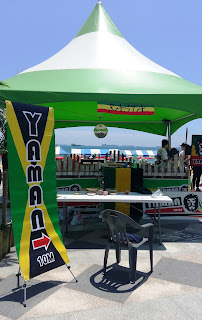 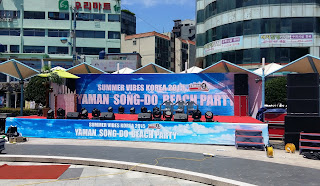 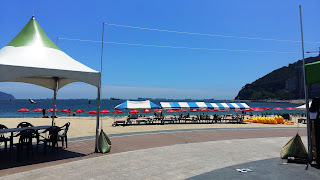 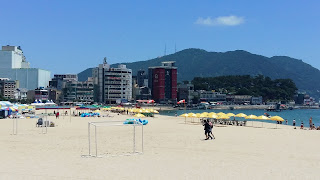 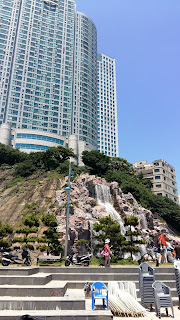 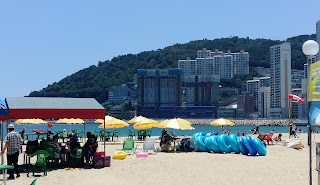 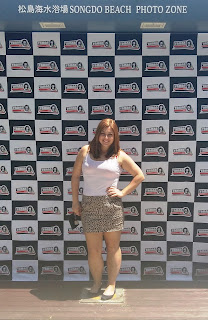 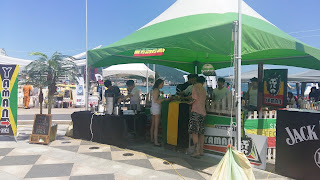 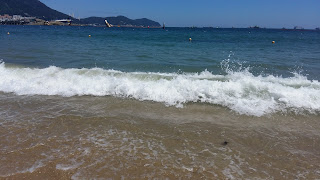 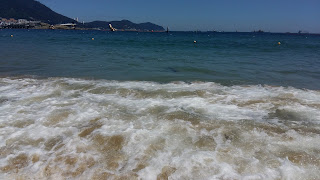 My friend and I were the only foreigners there helping out, so at first I’m not quite certain people knew exactly what to make of us.  Before too long, however, we had met some amazing, friendly people who cracked some jokes with us and made sure we exchanged numbers so we could hang in the future. 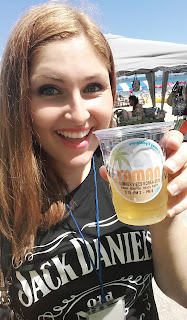 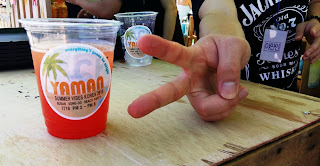 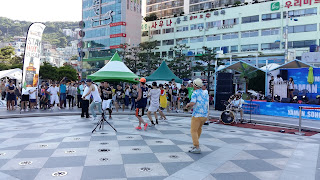 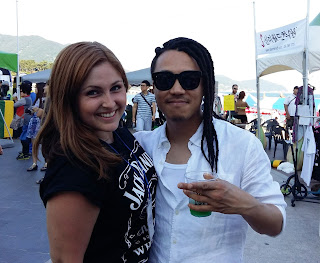 This is a famous Korean rapper.  That’s all I know. 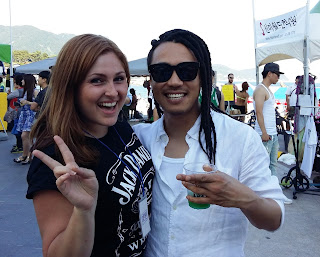 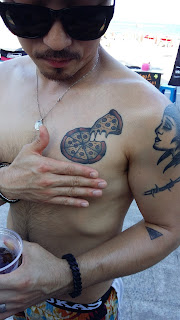 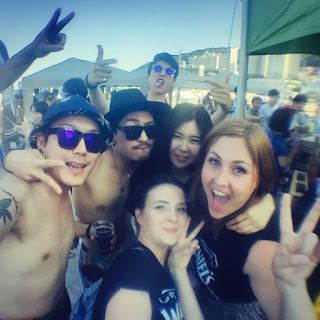 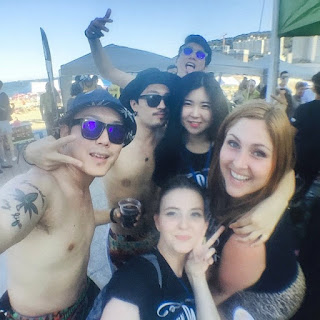 Naver (Korean Google) said that it would take an hour to city bus it back to Buam (near Seomyeon), so we cabbed it back which cost about $15 and took about 25 minutes.  We cleaned off the sand, had a glass o’ vino, and I was off to Oncheonjeong for a little gathering before seeing our friend Jason perform with The Dudettes at The Basement (where we spent G’s burt-day).  I also discovered AfreecaTV that night and all of the magic it includes.  You essentially just live stream your life and people comment in real time from around the world.  I’m pretty into it.  I might spend Thursday night having my first wine/ ramyeon/ chat that I’ll loosely call “mukbang” (look it up – it’s huge here).  Hey Canadian/ American friends – wanna join me in what’s essentially a giant public skype sesh while you’re all getting ready for work?  I know I want that… 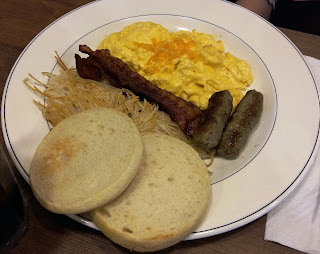 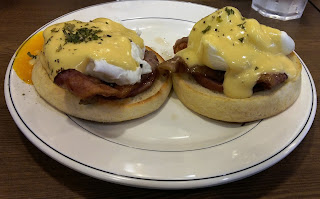 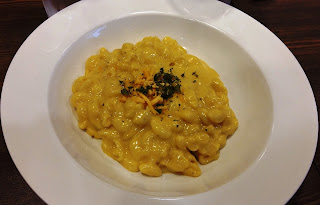 Sunday morning it looked like it might be sunny.  No such luck – our rainy “monsoon” weather had returned which was the perfect excuse to head down to Gumbo House to try some dishes from the brunch menu.  The Eggs Benny wasn’t a hit unfortunately.  The English Muffin wasn’t toasted, the first try at the poached egg was…not cooked…and the hollandaise was really mayonnaise-y and lemony.  The Mac n’ Cheese, on the other hand, was rich, creamy, delicious, and a steal at $8.  If you’re heading to Gumbo house and aren’t actually getting gumbo or jambalaya then the Mac n’ Cheese should be your go-to.  Actually…get it and share it as we did.  You won’t regret it.

We did manage to get some swim time in but it was cold and rainy and dark so we really didn’t last long.  Back to Seomyeon we went to see “Dark Places” (by the same author/ screenplay writer as “Gone Girl”).  We had just enough time to comfortably make it to the CGV in Judies Taewa by subway.  We did, in fact, make it in time, but apparently the CGV Seomyeon is actually near the Busan International Finance Centre.  We hailed a cab and raced over to the location in the Naver directions.  This is where things got a little weird.

I told the girls that I didn’t think I could actually blog about this because the situation was just a little too much.  We walked into a mall that had a KFC and a coffee shop (To the Different, perhaps?) but was otherwise inhabited by sad little stands and a completely dark and abandoned escalator.  Trying to follow the signs got us to a bathroom area, but we wandered around and eventually found a solitary elevator that took an eternity to call.

After seeing the elevator bounce itself down to the bowels of Busan abandoned shopping mall hell (that’s B5 for all of you counting) it pulled itself back up and we got on.  As we exited the elevator we noticed that the only route to take either led us to the roof (an open-air section) or a barely marked door.  We opened the door, peered through, and I was pushed into the unknown.  Yeah we were going to see a thriller, but we didn’t exactly expect the 4D experience en route…

We finally got to the ticket vending machine and after selecting our seats the machine refused to spit my card out.  It seemed like it was charging me again, and again, and again, and I was starting to panic.  I’ve never had to have a refund issued and with 4 minutes to spare until the movie started I wasn’t about it push for it now.  Eventually all was worked out, we made the movie (it was awesome, by the way!) and we were ready to go find some dinner…or at least an appropriate exit.  This proved difficult at first and we headed into a creepy arcade area before finding the proper exit (by the way the movie theatre snack game is on POINT at that theatre.  If you can make it past the creepy entry in time you’ll be able to snag what looked like Korean poutine before checking out your film.  There’s even a convenience store in there if you’re not about bland nachos or deep fried spicy squid).  We got to the main floor and realised had we made a right turn instead of a left we could have bypassed the entire zombie apocalypse mall scene and just headed up the proper set of elevators.  Rather than taking the subway we opted to cab back to Seomyeon to grab dinner.  Walking up toward the main drag we noticed two white 80’s limousines absolutely doused with dirt, grime, and soot (no – not just dust…these things had budding ecological systems on the precipice).  Convinced they were full of dead bodies (hey – 4 girls at night in a new area of town after a “scary” movie?  We had some fun freaking ourselves out) we peaced out to known territory and opted for Fuzzy Navel for dins (our food took almost an hour to arrive.  I wouldn’t go again).

The Typhoon has yet to beat us, but I don’t want to tempt fate.  I’m heading to Osaka, Japan soon for summer break with some rad people and although I’m sure it’ll be a blast either way I’m going to need the weather to be great if I’m going to enjoy Diagon Alley at its finest (yaaaaaaaaassss Harry Potter World Universal Studios Osaka!!!).  The Weekend Warriors may take it easy next weekend, but with one of the Dudettes suggesting a trip to Haeundae Saturday who knows.  I guess you’ll just have to wait and see!