After enjoying a few pieces of fried chicken the other day, it struck me that we grossly underappreciate our feathered friends. I recently came across the article on chickens while link surfing through the cloisters of Wikipedia. As often happens when I partake in such activities, I was pleasantly surprised by the amount of novel information I learned. And as Margaret Fuller once said, “If you have knowledge, let others light their candles in it.”
Right now, living, breathing and clucking on ‘our pale blue dot in the cosmos’ are 24 billion chickens. Most of us would probably not realise this because 78% of them are locked up in battery farms, far away from the prying eyes of the public. But it sounds about right. You wouldn’t have any trouble going to the store and buying a whole chicken and gobbling it up tonight. You could do the same thing tomorrow and the day after if you wanted to. In fact, it’s highly unlikely that we could ever out-eat our ability to produce chicken meat, because industrial farming of our favourite bird has developed beyond the imaginations of you or me. Unless you happen to be a battery farm engineer.
Chickens were probably domesticated around 10,000 years ago, and the ancient Egyptian 18th dynasty knew them as ‘the bird that lays every day’. Along with dogs, cats and horses, they’ve been with us since the beginnings of recorded history, helping us to build our societies into what they are today.

The UK alone goes through 29 million eggs per day. In egg-producing farms, hens are typically kept in battery cages under long artificial light duration which stimulates continuous egg-laying. My work here in Korea is focused on ovarian cancer, and our professor has suggested using chickens as a model to study because they have higher occurrences of the disease than humans do.
There’s a Japanese breed called the Phoenix, with long and graceful tail feathers that reach the ground. So-called ‘poultry fanciers’ keep these birds for exhibition, and the American Standard of Perfection (the apparent authority on poultry fancy-ing!), consider them to be ‘an officially recognised breed’.
During Indonesian Hindu cremation ceremonies, chickens are used as a channel for evil spirits. During the ceremony, a chicken is often tethered by the leg to ensure that any evil spirits are absorbed by it instead of family members.
And in classical mythology, a cockatrice was a dragon-like creature that hatched from the egg of a rooster. Its reputed magical abilities included being able to turn living things into stone by looking at them, although the weasel was apparently immune. While sounding pretty scary, cockatrices could apparently be killed by the sound of a rooster crowing.
According to Consumer Reports, “1.1 million or more Americans are sickened each year by undercooked, tainted chicken.” A USDA study discovered E. coli in 99% of supermarket chicken, the result of chicken butchering not being a sterile process. Faeces tend to leak from the carcass until the evisceration stage, and the evisceration stage itself gives an opportunity for the interior of the carcass to receive intestinal bacteria.

My older sister was always particularly fond of eating the Parson’s Nose, technically called the pygostyle, which is the fatty tail of the chicken. Its greasiness is due to preen oil content, but certain breeds of chicken don’t have them at all.
Most broiler chickens (bred for their meat) have their beaks removed with a hot knife. This is to prevent cannabilism amongst themselves, living in such close quarters, and some people consider it to be cruel as chickens have nerve endings in their beaks.

In intensive broiler sheds, the air can become highly polluted with ammonia from the droppings. This can damage the chickens’ eyes and respiratory systems and can cause painful burns on their legs (called hock burns) and feet. Chickens bred for fast growth have a high rate of leg deformities because they cannot support their increased body weight. Because they cannot move easily, the chickens are not able to adjust their environment to avoid heat, cold or dirt as they would in natural conditions. The added weight and overcrowding also puts a strain on their hearts and lungs. In the U.K., up to 19 million chickens die in their sheds from heart failure each year.

In natural circumstances, chickens will normally live longer than 6 years, but meat chickens are slaughtered at six weeks.
Wild chickens display considerably more advanced behaviour than their imprisoned kin. Roosters will court hens by offering them food and mother hens also cluck to let chicks know that food is around.
Individual chickens in a flock will dominate each other, hence the term ‘pecking order’. It’s similar to Korean grad student life. Removing the alpha chicken from the flock will result in a period of disruption in social order, until a new pecking order is established. That’s what happened in the old lab when our post-doc left.
Some groups which advocate for more humane treatment of chickens claim that they are intelligent. Dr Chris Evans of Macquarie University claims that their range of 20 calls, problem solving skills, use of representational signaling, and the ability to recognize each other by facial features demonstrate the intelligence of chickens. They also have the ability to understand that when an object is taken away and hidden, it nevertheless continues to exist, a feat beyond the capacity of small children. 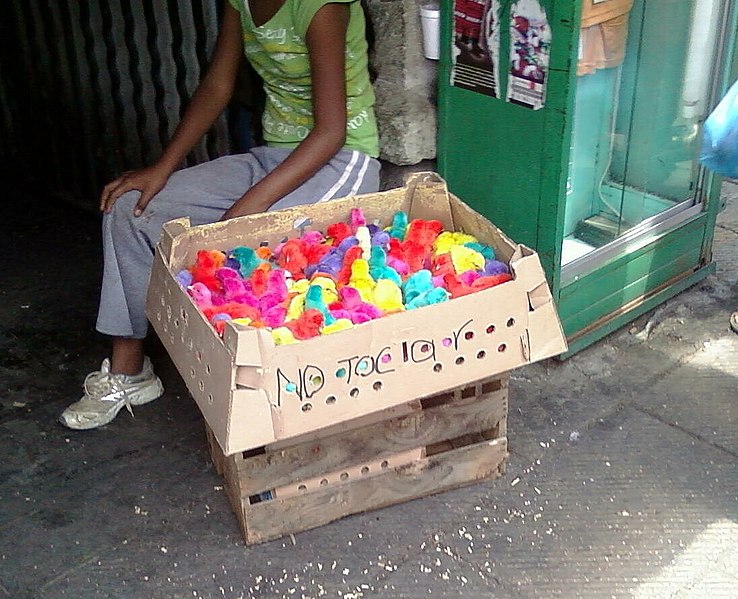 In the box above are dyed baby chickens for sale as pets in Oaxaca, Mexico.
So I hope all of this chicken-related information has been interesting. I’m not saying that you should stop eating chickens or eggs, as I’m sure to continue eating them as well (albeit, perhaps a little less now).
But the next time you enjoy some cheap and delicious buffalo wings, perhaps we can spare a thought for the humble chicken they came from…