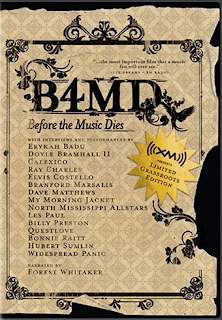 Before the Music Dies (B4MD) is a 2006 documentary film that criticizes the American music industry and the increasing commercialization of the art of music over the past thirty years. The film features interviews and performances from such musicians and groups as Doyle Bramhall II, Erykah Badu, Eric Clapton, Dave Matthews, Branford Marsalis, Elvis Costello, Bonnie Raitt [1] and My Morning Jacket. It was directed by Andrew Shapter, produced by Joel Rasmussen, and co-written by Shapter and Rasmussen. The film premiered on March 12, 2006 at the South by Southwest film festival in Austin, Texas.

The film looks at the evolution of American popular music and discusses the marketing of contemporary pop stars. “The reality is that superficiality is in,” says Marsalis. “And depth and quality is kind of out.”

-Wikipedia
A good friend of mine suggested I see this documentary. I was initially saddened, but not surprised and after watching, inspired. In the late 70’s, I was an AM Rock radio, Country music, and Soul Train follower.
As the 80’s emerged, I witnessed the slow decline in the passion and quality of music the mainstream juggernaut was churning out. No, this phenomenon wasn’t new; this trend began well before I was born.
The beginning of the 80’s was exciting. In 1983, Def Leppard’s Pyromaniastormed the airwaves; shot up to number 2 on the Billboard charts, and competed with Michael Jackson’s 1982 album Thriller which had vaulted to number 1. As the decade continued, I felt a superficial vibe in the music on the radio. It was playing, it was there, but lacked the passion and inspiration I was accustomed too. I started to look for music which wasn’t playing on mainstream radio. I would stay up late and listen to the pirate radio station 103.1 WVVX out of Chicago. I sought out bands and musicians who were hungry to be heard; you could hear and feel it in their music. I had no interest in big polished record moguls spitting out a record I didn’t want to hear, but marketing it as what I should be listening to.
With the advent of the internet, many musicians have shied away from the record giants, using this new venue to inspire themselves and their fans. Too bad for the major labels, they haven’t realized, we as fans have moved on, while they stick to their old business models and blame file sharers for their dipping sales. (Rolling my eyes) Just another feeble attempt of disinformation to keep their pockets lined.
Check out Before the Music Dies, you won’t be disappointed^^.
Also, check out atorecords.com -you might find something you like.