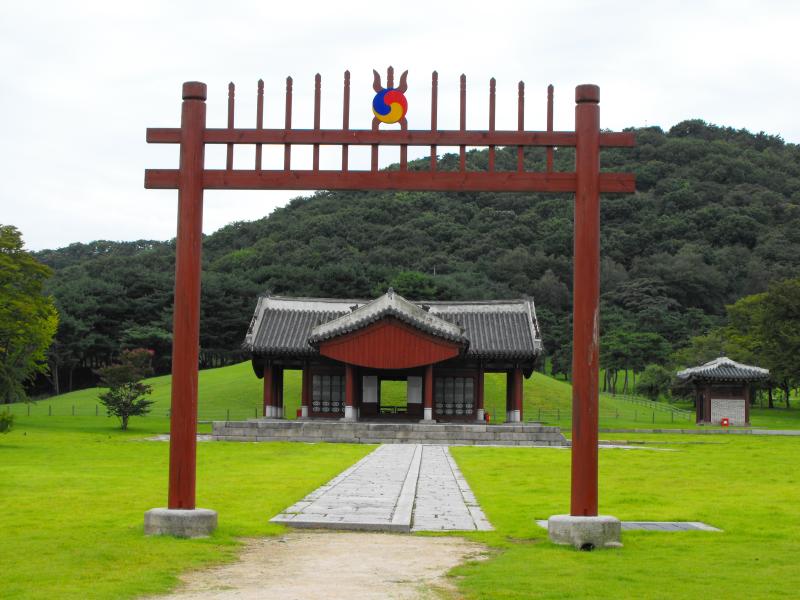 Today’s travel destination is sponsored by…several dead people. That’s right, it’s time to see some tombs given to people somehow related to the royalty of the time. Three tombs and a memorial hall are within a kilometer of each other in Seoul’s northeast corner of Cheongnyangni. Above we have the entrance to Uireung – a tomb holding the king-and-queen pair of King Gyeongjong (reigned 1720-1724) and his second Queen, Seonui. The red gate with two wooden pillars is called a 홍살문 (hong-sal-mun), and begins the sacred area of the tomb.

Today’s travel destination is sponsored by…several dead people. That’s right, it’s time to see some tombs given to people somehow related to the royalty of the time. Three tombs and a memorial hall are within a kilometer of each other in Seoul’s northeast corner of Cheongnyangni. Above we have the entrance to Uireung – a tomb holding the king-and-queen pair of King Gyeongjong (reigned 1720-1724) and his second Queen, Seonui. The red gate with two wooden pillars is called a 홍살문 (hong-sal-mun), and begins the sacred area of the tomb. 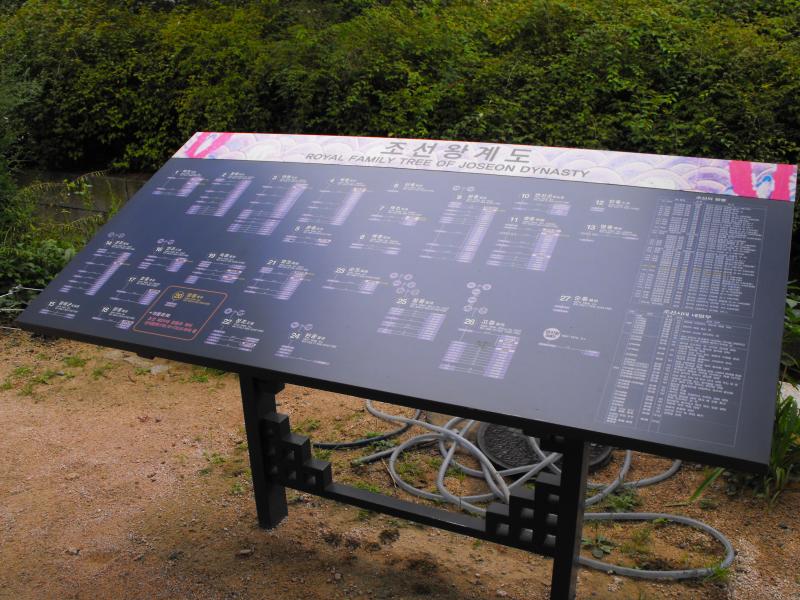 If you’ve ever wondered what the Joseon Dynasty royal family tree looked like, put on your magic reading-Korean glasses and take a look. Both Uireung and the next tomb we visited both had this long-lasting metal sign posted. 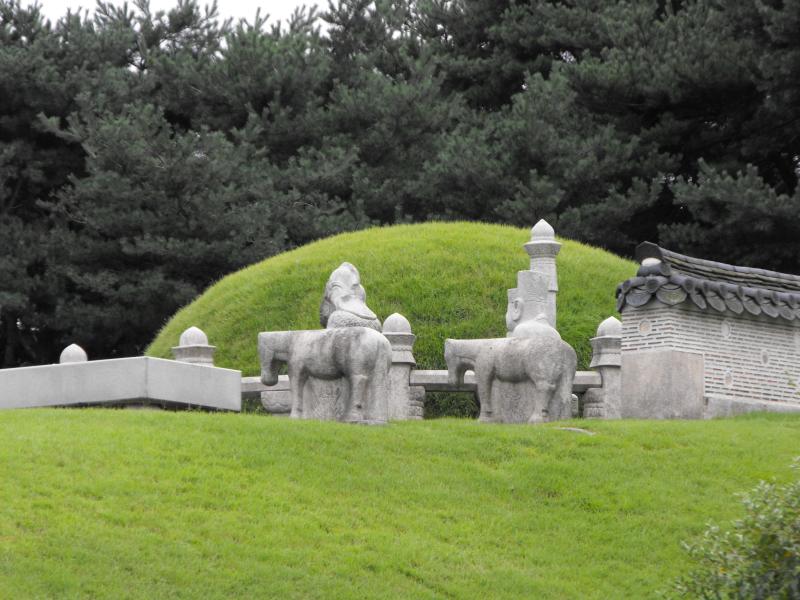 If you work for the Korea Tourism Organization, the press, or have some sort of special access, you could probably pass by the ropes just behind the 수라간 (su-ra-gan) memorial hall and climb the hill to see the top of the tomb. Since I’d rather not have some security guard running after yours truly, I’ll have to settle for what I can get with a long zoom. Military officers, scholars, and horses are made of stone, then arranged around the mound where the person themselves has been buried. Unlike most other tombs, Uireung claim to fame is that the tombs are front and back, not side-by-side, in accordance with geomancy (the natural energy of the earth converges).

This page on the official Korea Tourism site describes more of the pieces than we can actually see, but will give you an idea of the meanings. 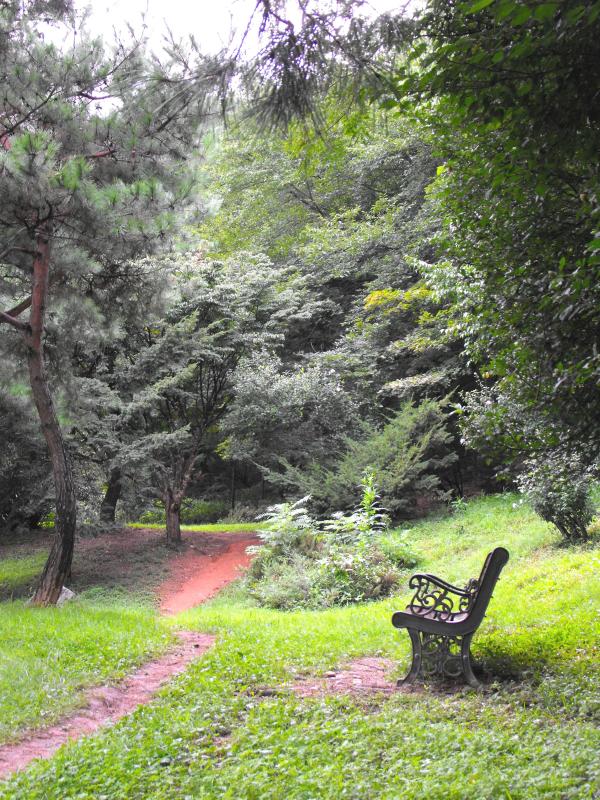 Go ahead, have a seat. You know you want to. One of several benches to rest at before making a choice – keep hiking or have a second look at the tomb? 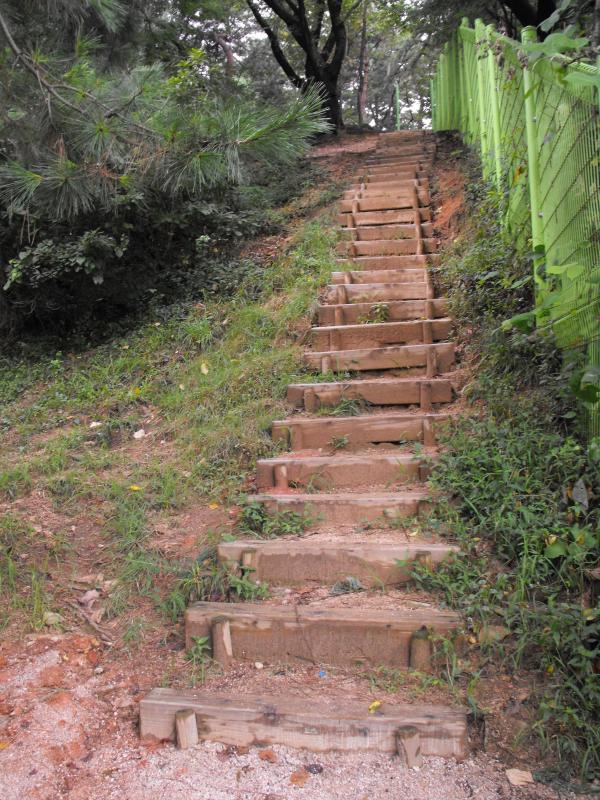 The tombs of Uireung is only one reason why people come here – a walking trail about 2.75 kilometers long makes a long loop around part of the shrine. If hiking wasn’t in your plans, there’s a much shorter loop that basically doubles back on itself, allowing a look up at the tombs along their right side: 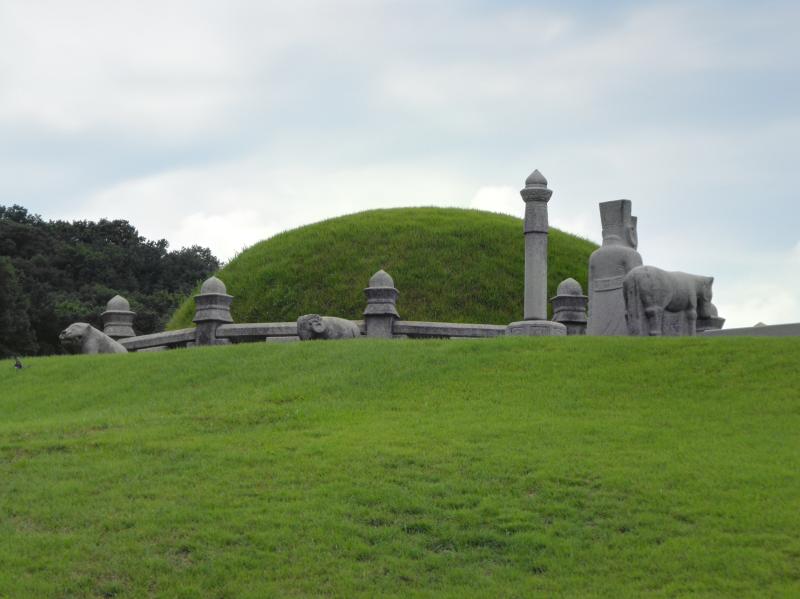 Again, not much to see while staying on the right side of the rope. I wish there were a way to see things without encroaching too far on their territory…

Our trip to Uireung complete, we headed down the street to find two more tombs for our viewing pleasure: 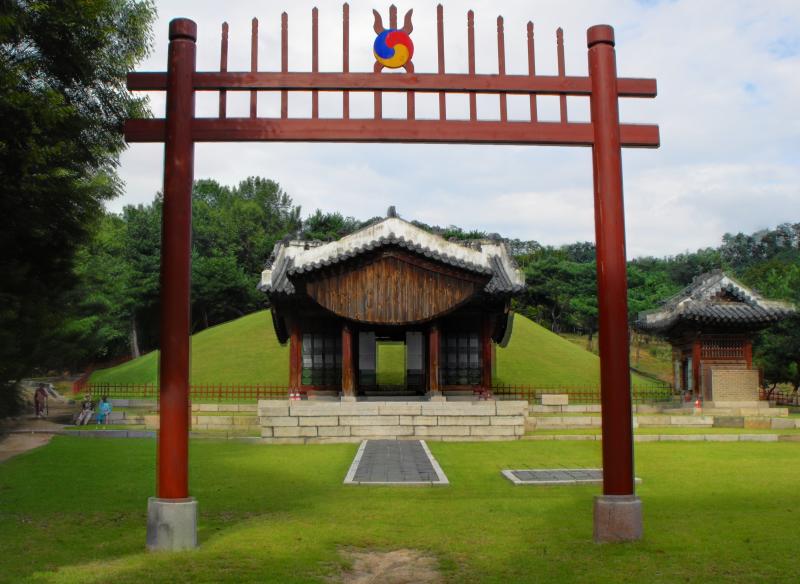 The second tomb is named Sunginwon for Yi Jin, the eldest son of Crown Prince Uimin. He died at the ripe old age of 8 months and 3 weeks (August 18, 1921 – May 11, 1922) by mysterious circumstances, yet gets the same royal treatment based on his royal status. The area was home to another tomb before that (called Hongneung, or the tomb of Empress Myeongseong), but that was moved to Namyangju in 1919. The name persists to this day – after all, would you rather have your area named after an Empress or a baby that may have never tasted solid food? 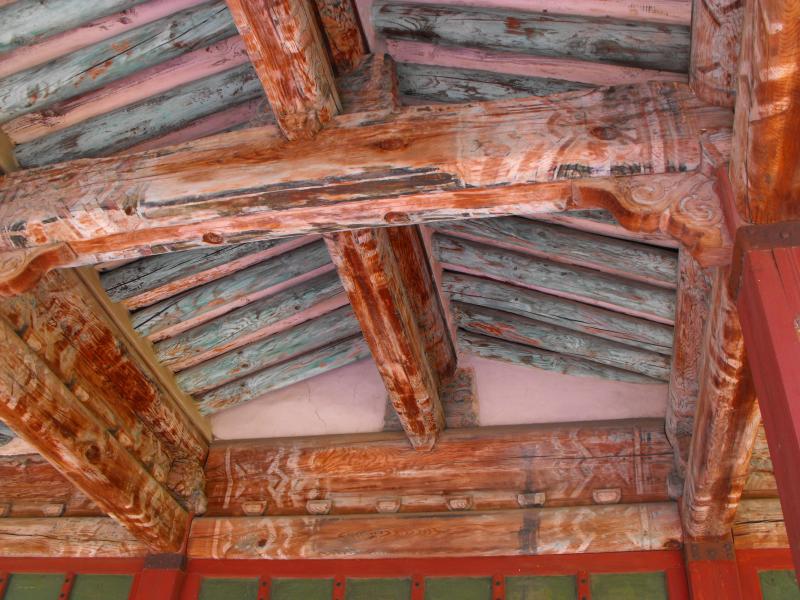 The ceiling of the memorial hall – either this hasn’t been the highest priority for renovation, or they mixed a bad batch of paint. 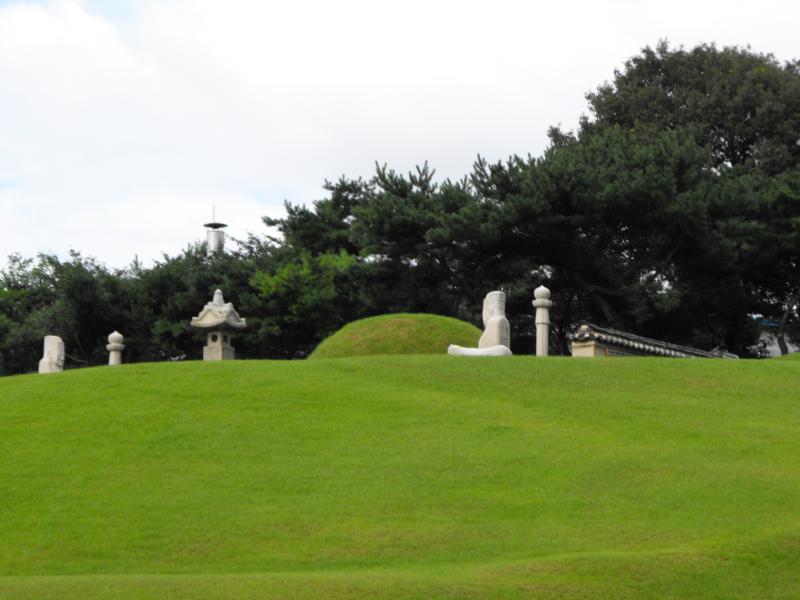 The number of stone statues seem a few less than the accomplished king, but then again, consider what might be done for a baby that (unfortunately) dies when they’re less a year old these days… 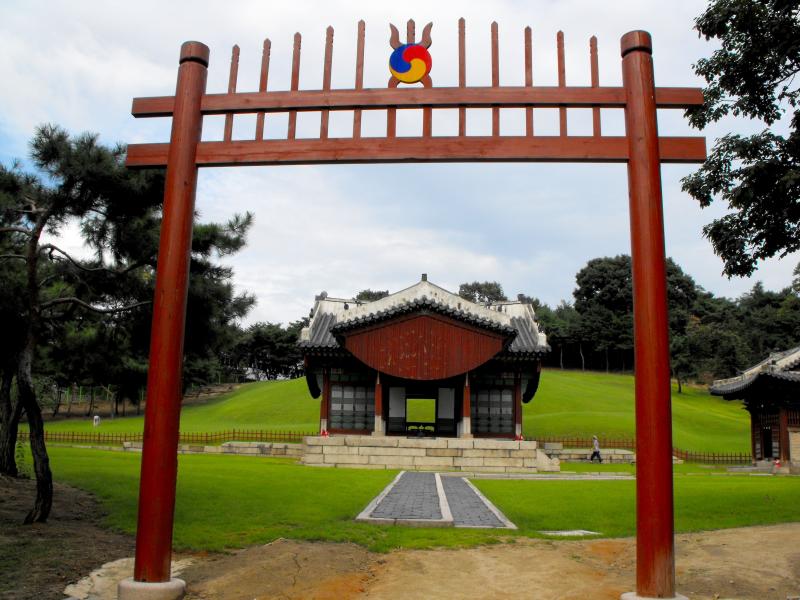 The other tomb on this site, Yeonghwiwon, is where Lady Eom (1854-1911) was built. So you know, the name of a tomb is won (like the money) when it’s the tomb of prince or royal concubine and neung (or reung, thanks to Romanization) for a King or Queen. A concubine of Emperor Gojang, she took an interest in the then-new-fangled style of Western education. In her lifetime she founded two schools and donated a large sum of money to a third, giving raise to the modern private school that many of us English teachers now work at. 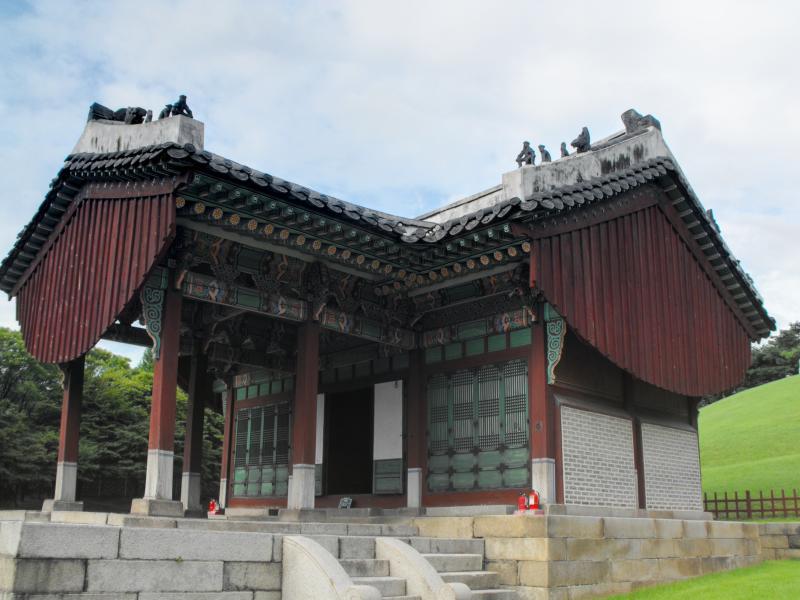 The 수라간 (su-ra-gan), or memorial hall for our Lady. If they all sort of look the same, that’s sort of the point – although recreations, they are based on plans from several hundreds of years old.

From here, we explored some wooded areas that separated the quiet tombs from the bustle of the city streets before walking down the aforementioned street to our last stop of the day: King Sejong’s Memorial Hall. 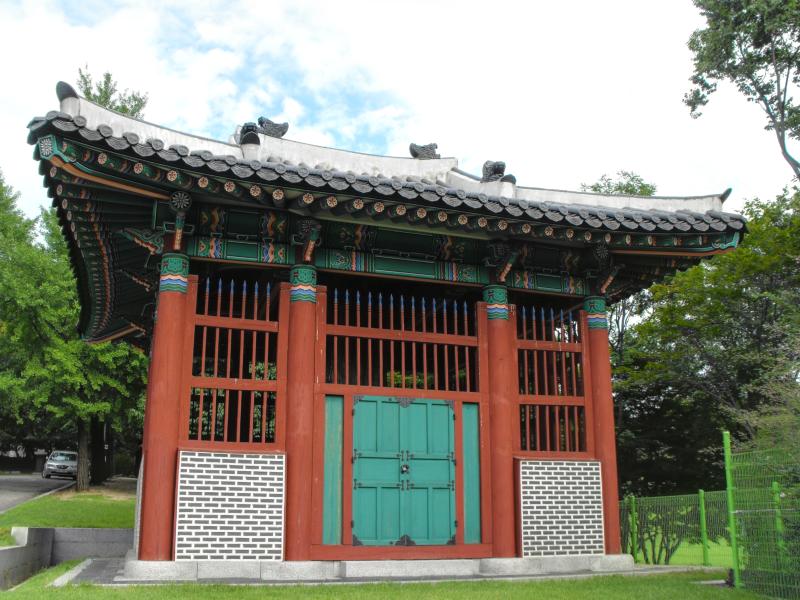 At the entrance to the area is 세종대왕 신도비 – the Tomb Monument of King Sejong. The text praises the King’s wisdom and records data on the Queen and her offspring. Originally erected in modern-day Seocho-gu in 1452 but moved here in 1974. The tomb was moved elsewhere in Gyeonggi-do (the province surrounding Seoul) in 1469, but this tomb monument and other items were left behind. 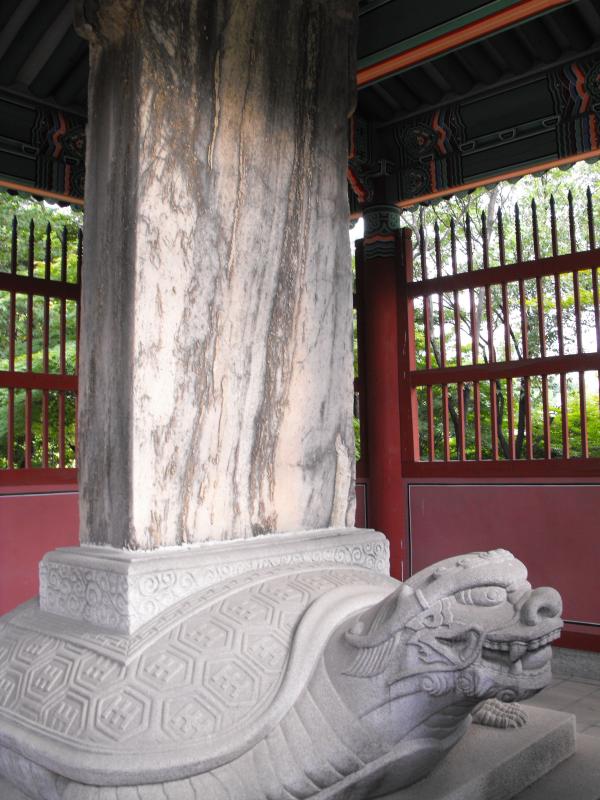 A peek inside the structure at the monument itself. There are supposedly 4,886 characters engraved on this monument, but even the nearby sign admits they’re “now very difficult to read.” Not pictured to the left is the parking lot and entrance for the Korean Film Council.

Walk past the monument, take a left, then look right to be presented with a close-up view: 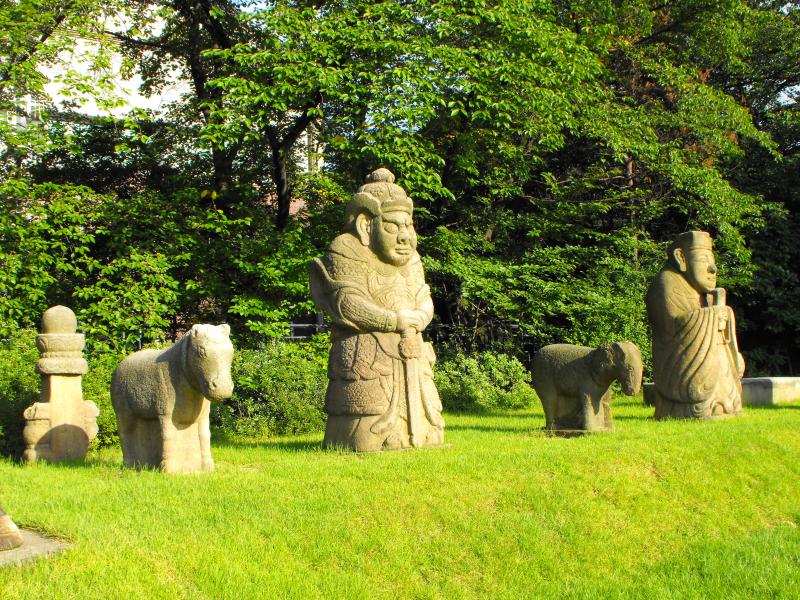 At first, they sort of reminded me of huge chess pieces (Knight to D3!) but without the rope, the hill, or awkward view from the bottom of the hill. This was just the prelude: 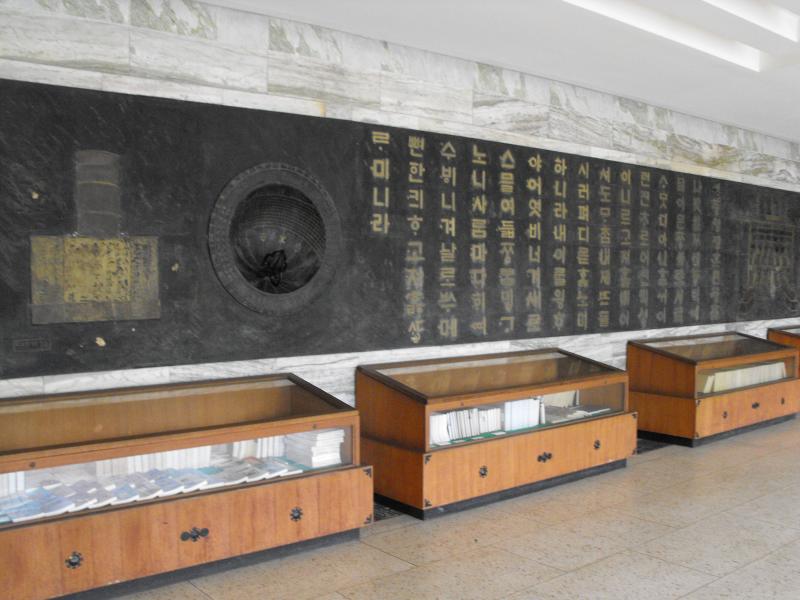 Welcome to 세종대왕 기념관 – better known as the King Sejong Memorial Hall. Opened in October 1973, it contains more than enough Korean hangeul to enjoy. While some recreations of Korean drums were interesting, this piece from the Hangeul room fascinated me: 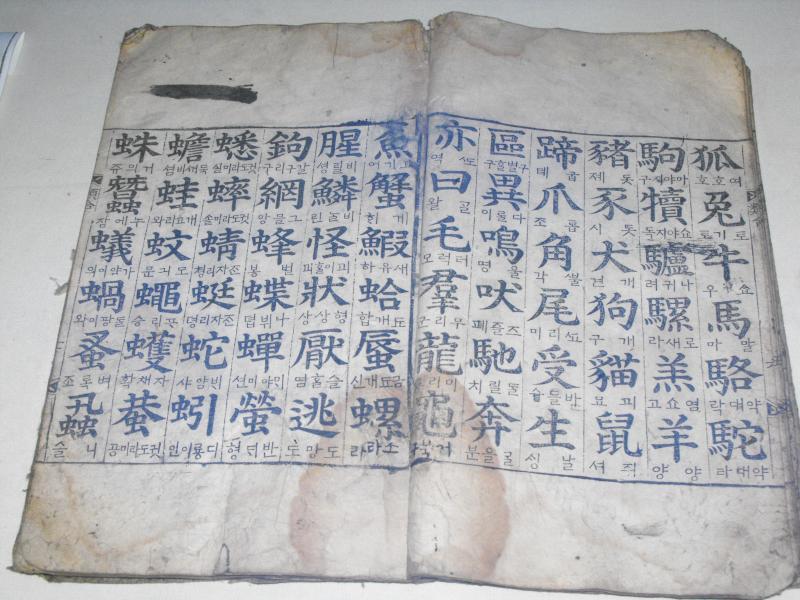 Once you’ve taught the masses about this new language, you still need a translation guide for the Chinese characters. Dating from 1527, this 유합 offered a description in Korean only, just like the rest of the hall. 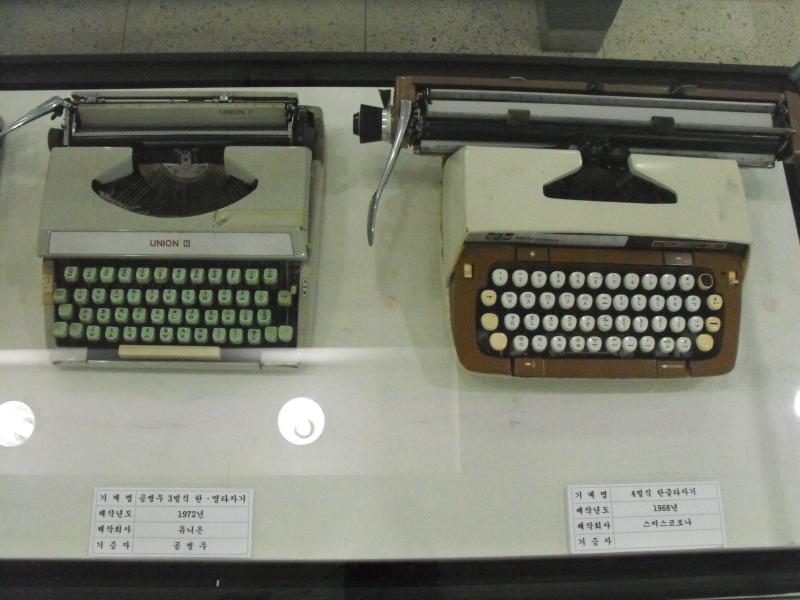 Of a more modern nature are some old-school typewriters. There are dozens of different typewriters and a few small laptop computers pre-dating Windows 95 – several of which have different keyboard layouts. Some were hangeul only, while a few offered a Korean and English layouts in different varieties. This goes beyond the DVORAK layout – several of them to be seen here. 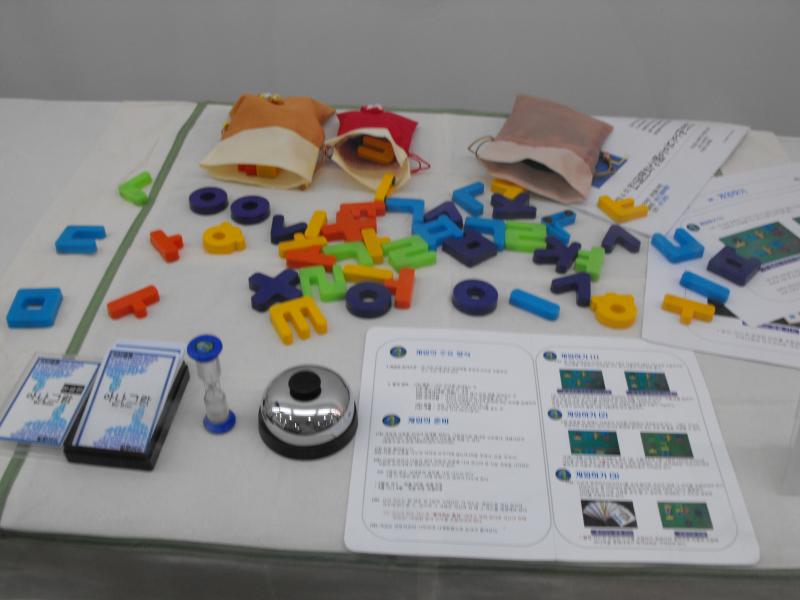 Of a much newer nature – hangeul fridge magnets, anyone? Peering through glass and offering only a description in Korean means that’s just a guess. There does appear to be a game behind it – I wonder if they still sell these anywhere…

Although our day wasn’t planned this way, the wonder of Seoul is that you can stumble across something just as interesting as your original destination without much effort.

Directions to Uireung: Take line 1 of the Seoul subway system to the Cheongnyangni station. Take exit 2, then turn right and walk 150 meters to the bus stop. Transfer to bus 1215, then get off a few stops later at the Uireung bus stop. After getting off, backtrack towards the light, then turn right. Follow the signs from there – you’ll also be in the Korea National University of Arts area. If you live in the area, buses 120, 1222, 147, or 261 also stop here. 1,000 won admission, handicapped / stroller accessible. Open 9am-6:30pm during the spring and summer and 9am-5:30pm during the fall and winter, but closed on Mondays.

To Yeonghwiwon and Sunginwon (AKA 관람 or Gwannam): Follow the above directions – same subway station and bus stop. Instead of backtracking, KEEP GOING STRAIGHT until you see the entrance on your right – about 300 meters. 1,000 won admission, handicapped / stroller accessible. Open 9am-6:30pm during the spring and summer and 9am-5:30pm during the fall and winter, but closed on Mondays.

To the King Sejong Memorial Hall: Follow the above directions – same subway station and bus stop. Instead of backtracking, keep going straight PAST THE AFOREMENTIONED TOMBS until you see the entrance (a driveway going uphill) on your right. Signs for the Korean Film Council should also help you to the area as well. Free admission, wheelchair and stroller-accessible.