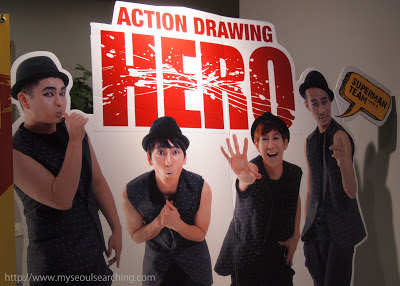 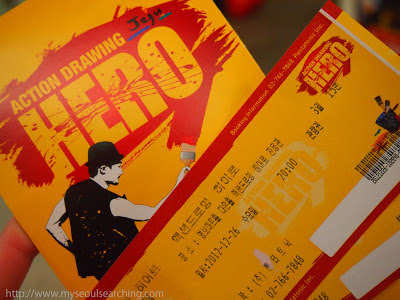 Before the show started, a video was played (this one to be exact) that consisted of interviews with the actors and various clippings of the show’s tours in major cities across the world, from Hong Kong to Hollywood.  Seeing that the performance has only been around for about two years, I considered this to say a lot about the show.

Action Drawing began with the introduction of the actors (artists), who entered the stage wearing paint-splattered vests, pants, and Charlie Chaplin hats.  After a bit of slapstick to warm up the audience, the guys immediately went into their first act. A solo actor scratched away at a back-lit board to eventually create a portrait of Che Guevara, one of the first “heroes” highlighted in the performance. 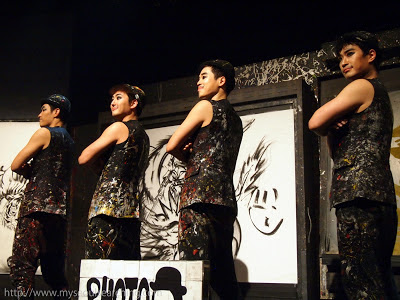 A group segment was next in which each artist painted a single square canvas, which, when assembled together resulted in a cool painting of Michael Jackson.  There was quite a bit of moon walking and crotch grabbing to keep the audience’s energy up during this, which was pretty comical.  Glue was used in the next segment, though the audience was unaware of what the end result would be until the last second when sand was added to reveal Bruce Lee’s face. 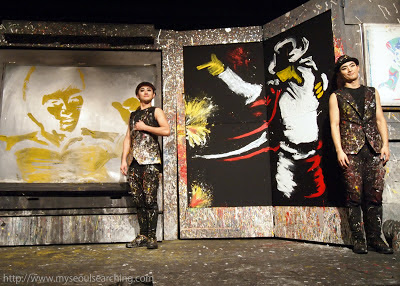 Other interesting techniques used to make some of the featured creations were cube art (arrangement of Rubik’s cubes to make an image), speed drawing, marbling (using liquid and dyes to create a scene), battle drawing, and one of my favorites, light drawing.  The light drawing technique was done in the dark in which a flashlight-like pen was used to draw a romantic landscape on glow-in-the-dark boards.  As a kid, I had a toy called “Flash Screen” that was produced by Nickelodeon and Mattel and was basically what these artists used.  I used to spend all day playing with that toy but would have never thought of it as a medium of art. The audience seemed to be captivated with it, as well. 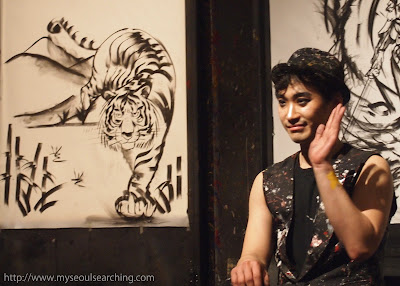 There were a few awkward moments when the actors’ attempts to entertain the audience between acts fell short, but in general, it was fun and very entertaining.  The artists were talented, funny, and eager to involve the audience.  Action Drawing- Hero is a show worth checking out if you enjoy art or if you’ve seen the other big performances in Seoul and want to experience something totally different.
Action Drawing- Hero is shown daily at 5PM and 8PM on Monday-Friday, at 4PM and 7PM on Saturday, and at 3PM and 6PM on Sunday.  Seats are 40,000 (R)- 50,000 (S) won depending on seat location.  Tickets can be reserved by e-mailing [email protected] with your name, country, desired show date and time, seat class, and number of tickets.  Visit their official website for more information.