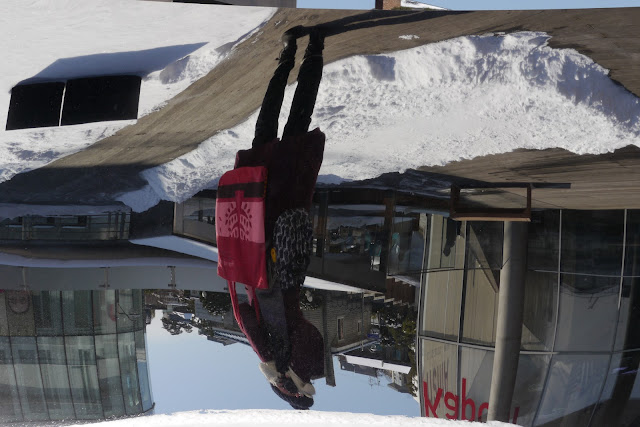 A mirror only reflects, it doesn’t retain the image forever. However, Anish Kapoor’s “Vertigo V & VII” made of stainless steel, do more than just reflect. They shift, morph and construe the simple view of yourself and surroundings into mind-boggling size and shape.

A mirror only reflects, it doesn’t retain the image forever. However, Anish Kapoor’s “Vertigo V & VII” made of stainless steel, do more than just reflect. They shift, morph and construe the simple view of yourself and surroundings into mind-boggling size and shape. 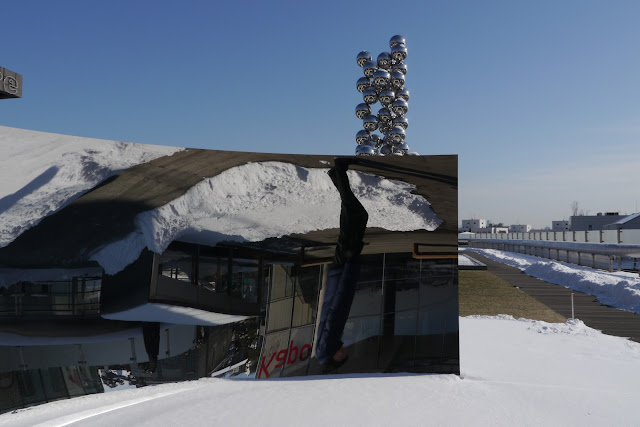 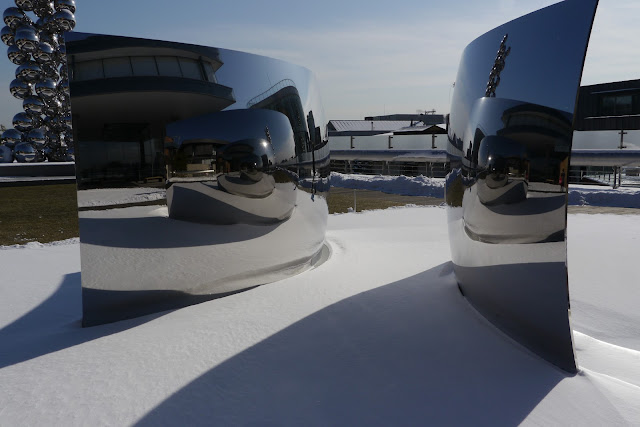 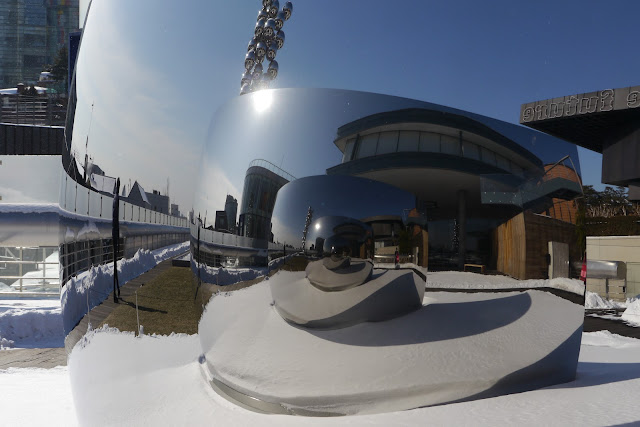 This work of art succeeds so well because it brought me into it by the way my reflection moved about it’s shiny surface. You have to watch yourself grow and shrink, enter and exit as you circumambulate this larger than life sculpture. 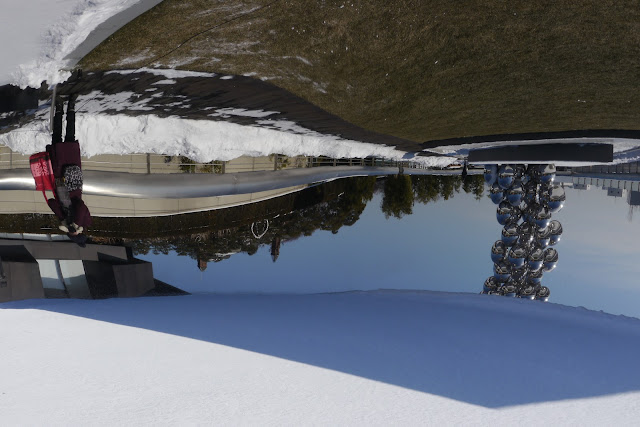 But that’s just the beginning of Anish Kapoor’s current exhibit at the Leeum Samsung Museum of Art in Hangangjin. The work, “Tall Tree and the Eye” is so tall and bulbous you can’t help but feel slightly miniature. 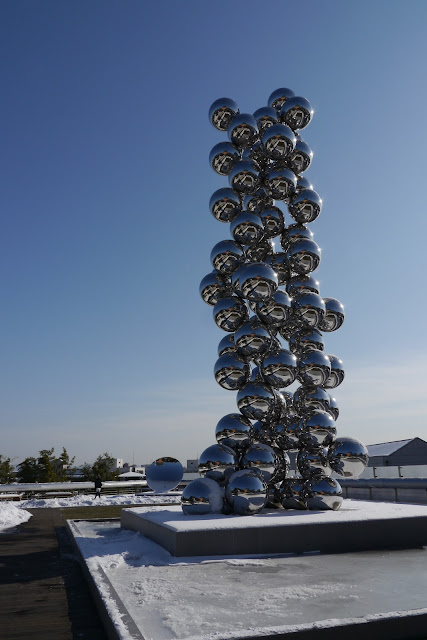 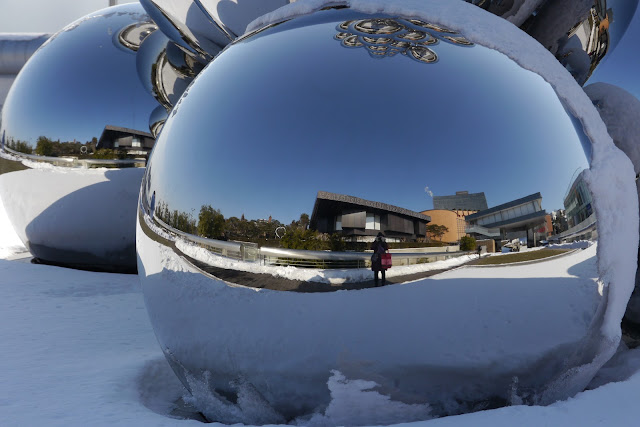 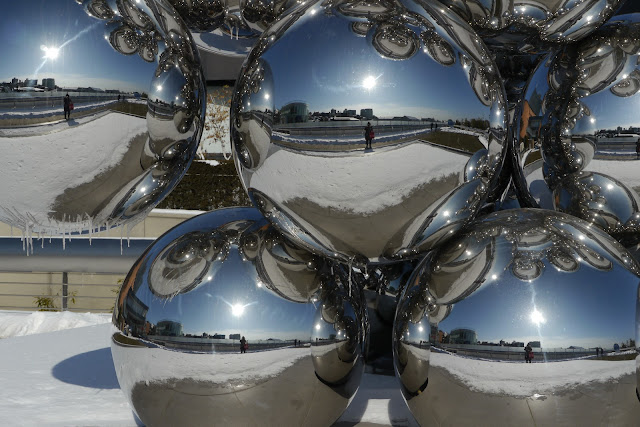 The spheres, seen above, seem to be a main theme of Anish Kapoor’s work.  Not really mentioned in the brochure, but the shape of most of his works were in a sphere shape, if not close to it. What is so special about the sphere? Does it resemble the feeling of a womb? “Inside and outside” is a theme mentioned and indeed, the reflective mirrors, orbs all protrude and recess in such a way that is eerily encompassing. 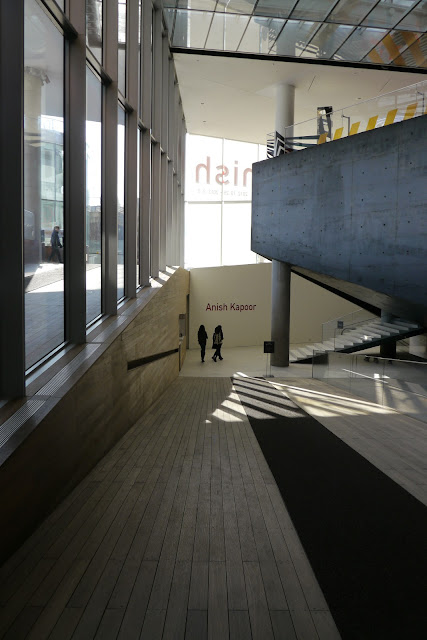 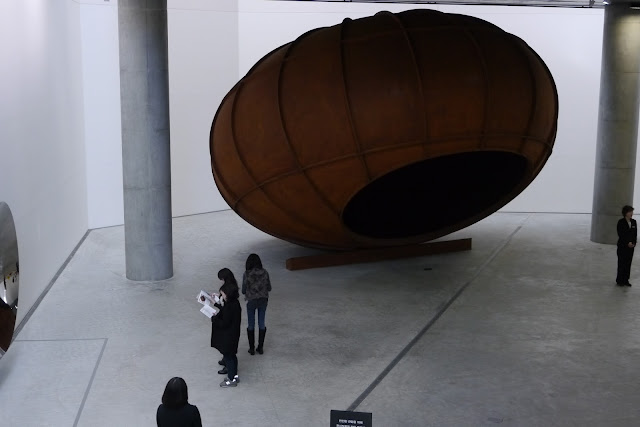 One monumental example of this concept is the work, “Cave” made of Cor Ten steel. As you approach this work you do so cautiously because you notice it is balanced upright in a tilting manner and laying to rest on a horizontally-rectangular rod. Is this safe? 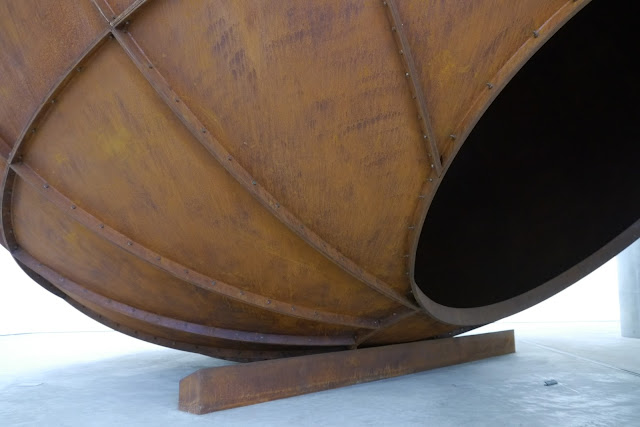 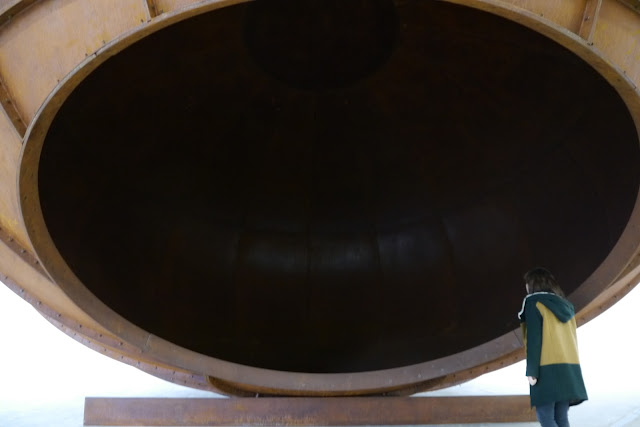 Curiosity takes you close to the work, just enough so you don’t cross the “line” put down by the museum. And the work succeeds in drawing you in under the canopy of the deep steel opening. “How was this made?” You stare up in to the darkness looking at the differing shades as you notice the rivets and corners inside the piece. 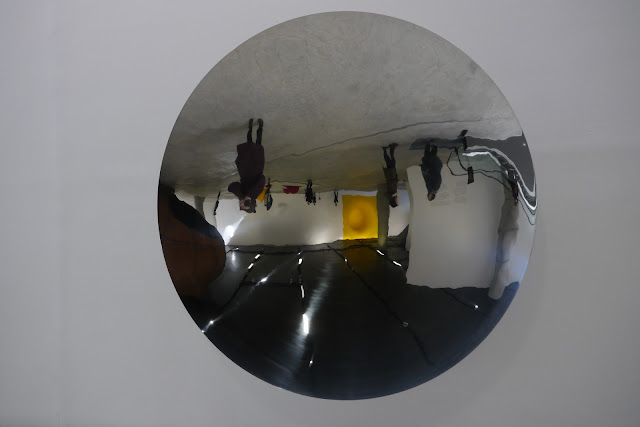 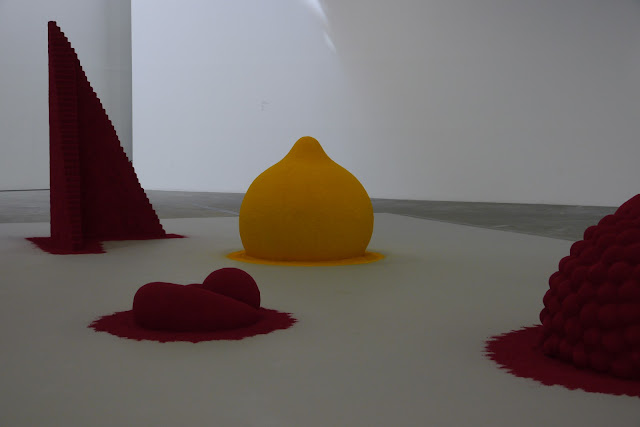 Color introduces itself beyond the rust on “The Cave” on some of Kapoor’s early works. Here you can tell he was fascinated with objects and their placement on surfaces, as seen in how these pieces seem to melt into the platform. “To Reflect and Intimate Part of the Red” mixed media and pigment. 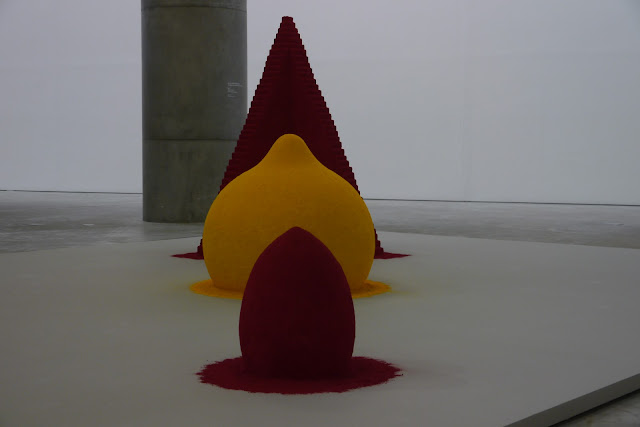 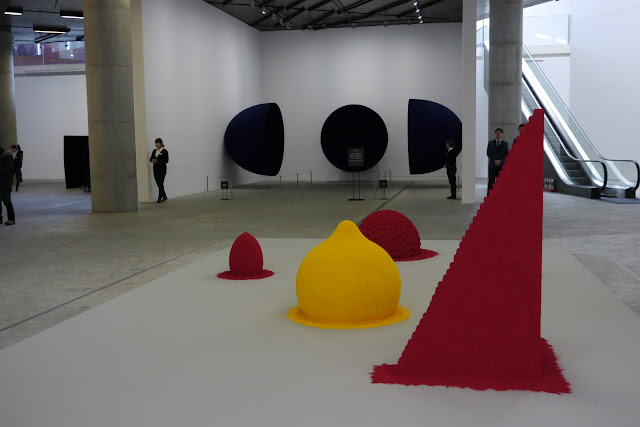 That melting or dissolving into the ground transformed itself into other works on the walls. Looming large is a perfect yellow square, yet with a sphere punched into it’s center. This concave beast, although smooth and in a “friendly” shade of yellow, seems to scream out into the gallery. You want to get up and climb into it or at least touch the smooth entrance of where the wall turns into itself. Titled, “Yellow” and made of fiberglass this was definitely a fun one to look at. 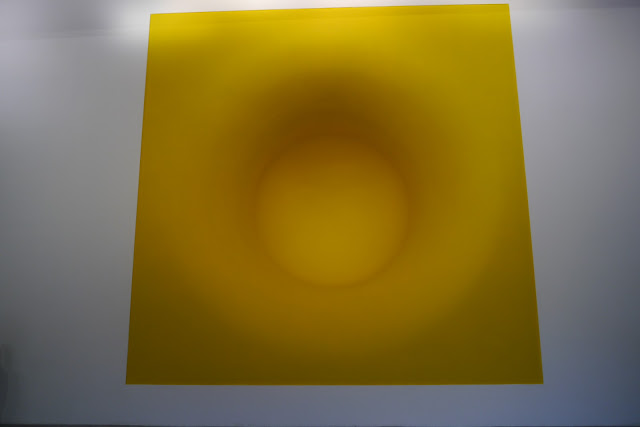 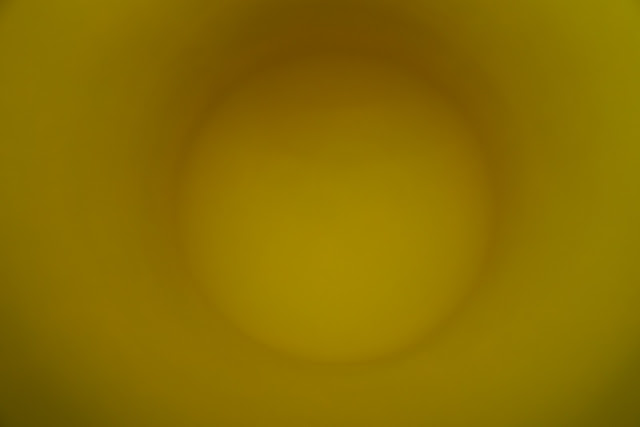 In the following work, “Untitled” of blue spheres attached to three walls, you definitely feel a trick of the eye as you get closer. 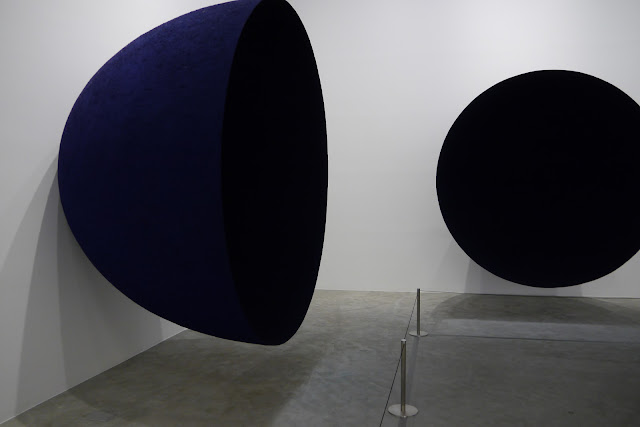 At first you think they are solid forms, but as you peer in closer they become shells of velvety blue. A color so dense it was as if looking up at the night sky. 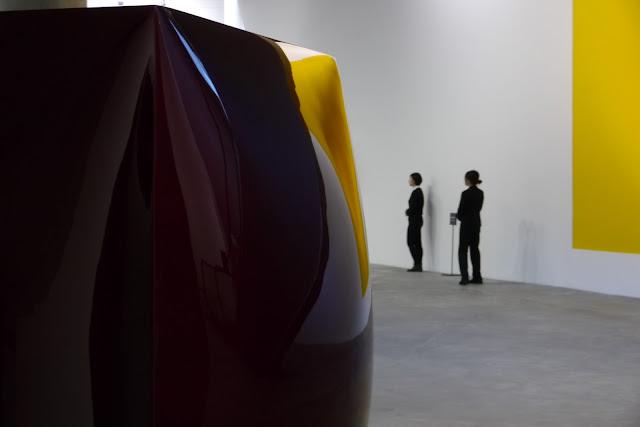 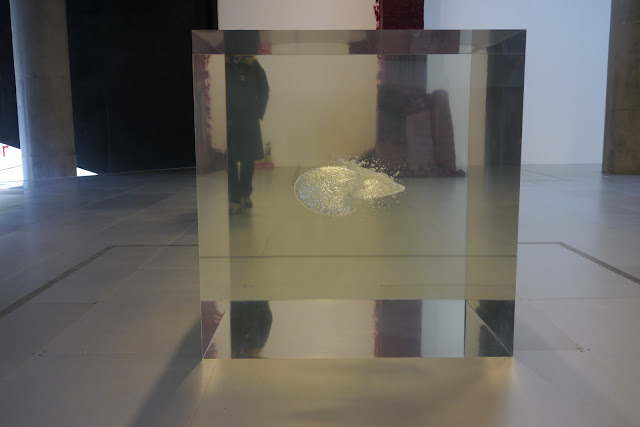 Other works played more on these concave and obtuse forms, but the one cube above with the shattering splotch in the center, I felt, played tribute to the practice of casting objects. 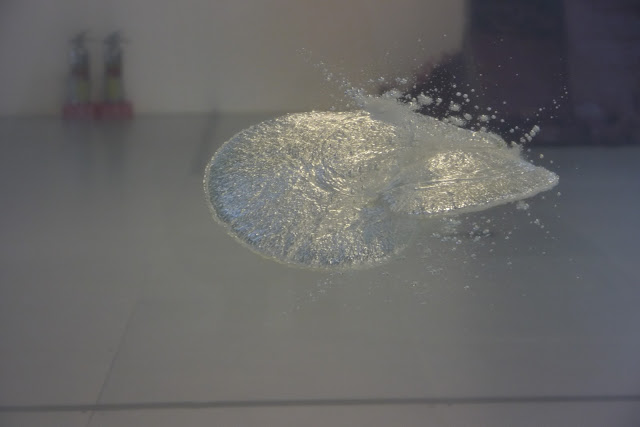 Heading up the escalator to the 2nd floor you are greeted by the presence of a large wax circle that still has that smell of melting candles. 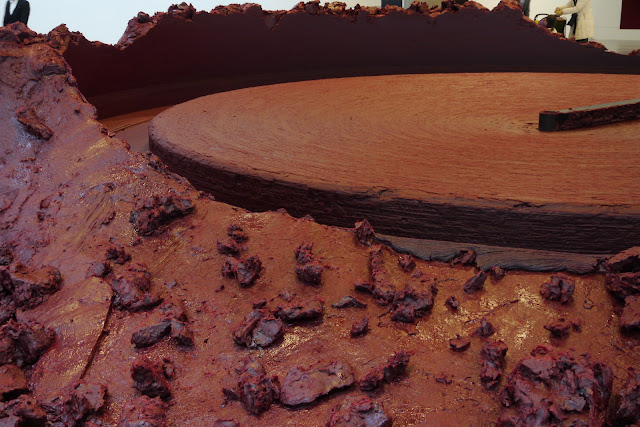 After reading the description the work makes itself more clear, of course.

Like the hand of a giant clock, a massive hammer makes one rotation per hour around a circular vat of red-pigmented wax, scraping and reshaping its surface in the hammer’s path to produce a vast, continually changing sculpture in red wax. …As its title suggests, the work is a metaphor for the universal homeland, an organic place of creation and birth, rather than simply referring to the artist’s own homeland, India. 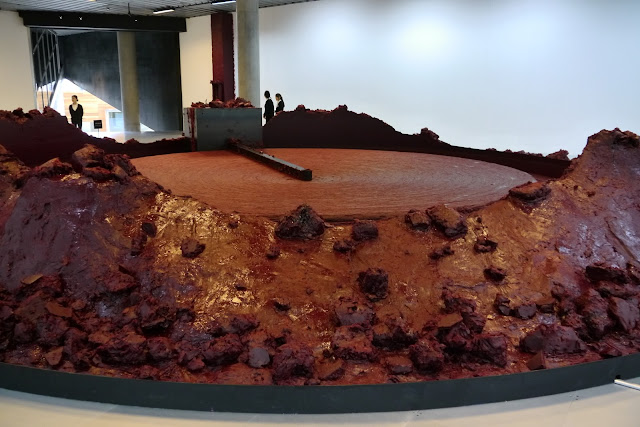 I don’t think it was rotating at the time I saw it, as I am sure that is something I would have noticed. I’m not sure if his wax pieces are a success, as the texture and material seem to detract from his other works that seem a lot about precision. This work hails from 2003, so perhaps it was during a time he was reaching out.

Overall, I enjoyed this exhibit but not as much as the Do Ho Suh one I saw last year. However, Anish Kapoor is one of the artists I studied in college, and it felt good to see a plethora of his works.

The show is running till February 4th, so why not head down to Hangangjin (Itaewon’s neighbor) see the show and then grab a tasty bite to eat down the road. (That’s what I did!) 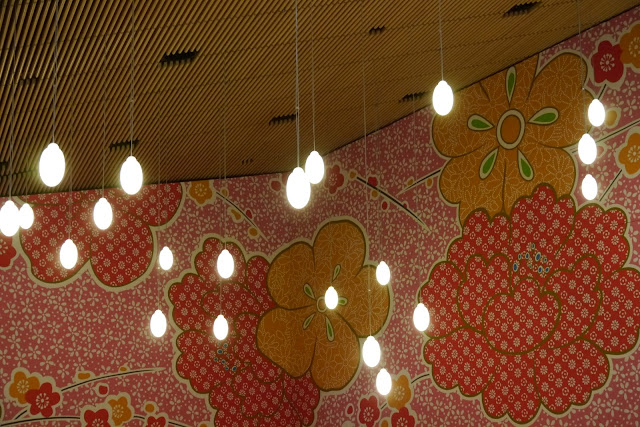