It’s Summer English Camp time.  Things have changed a little since I first arrived.  Until very recently, Korea still held Saturday classes twice a month.  They have since stopped Saturday classes which gave rise to two big changes in the education system here in Busan.

It’s Summer English Camp time.  Things have changed a little since I first arrived.  Until very recently, Korea still held Saturday classes twice a month.  They have since stopped Saturday classes which gave rise to two big changes in the education system here in Busan.
The first is the addition of a new program under the Busan Metropolitan City Office of Education (BMCOE) called SAM (Science, Art, and Math in English).  “SAME” would probably be better, but I don’t make the acronyms.  SAM was created to provide students an educational venue in lieu of Saturday classes.  The purpose of SAM is to provide students a venue to learn English in the event they cannot be part of a private academy (or hagwon) for one reason or another.  The BMCOE reached out to foreign English teachers to find willing participants to support the new teaching program.  It is also paid teaching time above and beyond a teacher’s normal pay scale.  I was involved during the first semester and it was an adventure to say the least.  Great teaching experience, but an adventure!

The second change was to the semester-end break durations (Summer and Winter breaks, that is).  Previously, breaks were 5-6 weeks.  They are now 4 weeks, accounting for the classes that were once taught on Saturdays.  Therefore, Summer and Winter Camps are now 2 weeks rather than 3, and the remaining time is used as vacation time. 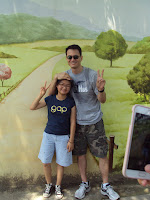 Back to Summer Camp!  Our school has scheduled two separate field trips during camp.  The first was this past Wednesday (7/25/12).  Our group ventured to the outskirts of Busan to a small village called the Gamcheon Culture Village.  Gamcheon is a financially challenged village that reflects the life in previous decades for this country.  South Korea is only recently coming into financial prosperity which explains the label of being one of the “Four Asian Tiger” countries.  Prior to the 1960s when their growth began, South Korea was a war-torn country whose future was in question.  Nowadays, it’s difficult to miss seeing the fruit of their financial abundance no matter where you turn.  Unless of course you turn to Gamcheon Culture Village.  Strewn onto the side of a mountain, Gamcheon is a maze of narrow allies and walkways connected by steep, makeshift stairwells.  They tell visitors that it is the Korean Machu Picchu.  There are really no similarities between Gamcheon and Machu Picchu.  However, I think the reference is due to Machu Picchu being a UNESCO World Heritage Site and Gamcheon having been artfully rejuvenated by UNESCO volunteers.  Just my guess.

This recent rejuvenation project brought many volunteer organizations (e.g. UNESCO) and artists to the area to create a guided path through the streets and alleys where artistic upgrades had been made to many buildings, walls, and paths.  Though Gamcheon rejuvenation is low-key and offset from the main areas of Busan, it is presented in a very organized and interesting way – complete with guidebooks for stamping at each art display, small locally made arts and crafts, and cafes or concession stands.

The morning we chose to go was VERY hot.  Though we all shed many pounds that day, we were able to take in the interesting and creative displays throughout the village.  It is not a Disney attraction, and definitely not touristy by any means.  Appreciating Gamcheon Culture Village requires you to look a little further to appreciate both the struggle and simplicity of the community, as well as the effort and sincerity put into the artwork to make it a better place.

Gamcheon Culture Village was a very unique experience.  Not a place you would see in the travel brochures or ESL recruiter websites.  It’s an experience to bring you for a brief moment into another world within South Korea.  One that I think every traveler or Korean native should try to see.