All old posts, comments, and whatever else I may post in the future, can be found at Big White Barbie

I created a more appropriate URL for this blog about a year ago, and have since been too lazy to move it over. Sometime in the next week, probably tonight, I’m finally going to actually do that. Probably. I don’t really plan on deleting the stuff at this address, at the moment; I’m just done posting at it.

I had originally intended on posting some stuff that I have written, but didn’t really feel like sharing while I was still in Korea. Things like:

I’m running off to Europe for a bit to take the CELTA course.

I’ll be back to whine about Korea before anybody notices I was gone; late May, perhaps.

When I was walking around Ottawa with a friend of mine earlier this week, she kept hopping behind me as people approached us. It was bizarre and made me uncomfortable. Was she afraid of the Ottawa locals? Had she recently been mugged?

“Why are you doing that?”, I asked (in the impolite, heavily accented townie dialect I’ve been quick to readopt in the weeks since my return).

“There’s somebody coming.” She gave me a strange look.

A long pause followed. Then, it hit me.

“Oh… you’re letting people by, instead of forcing them to either elbow around you or wade through the row of dog shit which lines the sidewalk. I get it. That’s very… considerate of you. I should probably start doing that again.”

My readjustment to Canadian culture is a work in progress. For the most part I’m doing okay:

That said, it hasn’t been perfect.

Last week I met up with a few friends that I hadn’t hung out with since last time I was in town. We had a few drinks, after which it became extremely clear that I was actually the extra wheel on a double date. That it took me about two hours to notice is not terribly surprising. I’m pretty sure that my friends didn’t really realize it, either; there was much confusion when I opted to depart shortly after midnight.

I am jet lag’s whore. I’m confident that in time, I can flip this relationship on it’s head. For now, I float through the day slightly groggy. My first flight left Busan at 7am Wednesday morning; my last arrived in Toronto at 8pm the same day (so to speak). Were it not for the 10 hour layover in Incheon, or my completely failure to fall asleep, this might be an easier transition.

It was brought to my attention that my blog was out of date. I leave Korea, possibly for good, in just under two weeks. The lead up to this has been stressful as Hell, so I more or less forgot that my blog existed. Now that I’ve remembered, here is a summary of where I’m at:

When I finished my first contract in Korea, my boss honoured my contract, paid me in a timely manner, and personally delivered me to the airport. While I didn’t expect the same treatment from a much larger, less intimate institution, I expected something more than what I’m getting. Still, in the end, I will more than likely get paid what I am owed and return home in one piece. It’s not all horrible. I’ll provide more details on what went down after the dust has settled; if I write about it now, I’ll produce a 10 paragraph mess of angry gibberish.

I hadn’t been sick in well over a year. When 2010 rolled in, bringing with it my first bout of the flu since first moving to Korea, I was due. Cold or flu? Whichever, it was my turn. I have no qualms about starting off the year on my ass. Again. It happens.

I’ve been very accepting of the fact that sometimes, even I get sick, since I woke up with this last Saturday. I’ve been very patient. I slept away the entire weekend, took vitamins, ate soup, and even enjoyed the down time a little bit. Not that this did me any good. My cold, flu, or whatever has stretched its way through another weekend. This time, I’m not enjoying the down time quite so much. As I took in episode after episode of The Sopranos today (Season1 – I’m new to the series. Apparently I wasn’t around last decade), a friend of mine was getting married in Daegu.

I’m staying in tonight to eat cheesecake and catch up on Season 5 of It’s Always Sunny in Philadelphia. If the mood strikes, I may also start Deadwood; I just finished Sons of Anarchy Season 2, so I’m due for another drama. As far as I’m concerned, this is a pretty excellent way to bring in 2010.

Happy New Year to all. Let there be none of this: 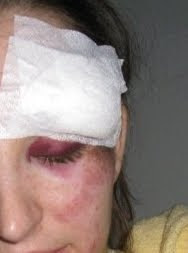 I’ve reached that point in my stunted emotional development where I start to think that coming back would be a good idea. It really wouldn’t be. At least, not without trying something else first. I know that. Still. It would be nice if what is best would coordinate with what is easy for once.