Married life is pretty much the same as non-married life, except that you get to live together and your mother-in-law will start dropping subtle hints about grandchildren. Life in Seoul continues as normal in most other ways, but overall I would have to say that being married is better than not being married.

At this point it’s tempting to add a sharp quip like “Thus far.” But I won’t, because my wife will most likely frown at me after reading it. 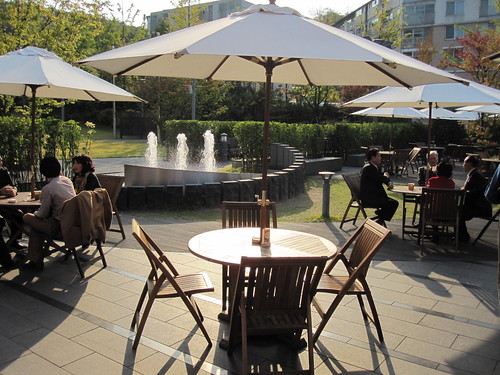 Married life is pretty much the same as non-married life, except that you get to live together and your mother-in-law will start dropping subtle hints about grandchildren. Life in Seoul continues as normal in most other ways, but overall I would have to say that being married is better than not being married.

At this point it’s tempting to add a sharp quip like “Thus far.” But I won’t, because my wife will most likely frown at me after reading it.

We’re pretty lucky with accommodation on campus, because we’ve got a larger place for a cheaper price. And there are two bars within walking distance. Next year we’re applying for the Hoam Faculty housing, which is even better than what we have now. The waiting list is long, but if we get the timing right, we could stay on campus until I graduate. Most people have to leave college housing after 2 years, but if you swap buildings at the right time, you can reset your countdown. 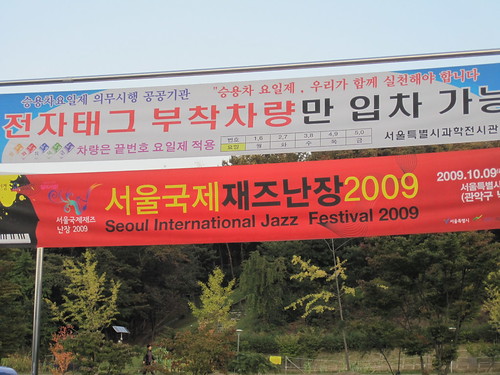 Also nearby is the Nakseongdae Park, which was recently renovated into a large community venue. The second Seoul International Jazz Festival was held here in October, so we went along to have a look. Heather and I are curious people in general, but we are more likely to investigate anything that is free and near our house. 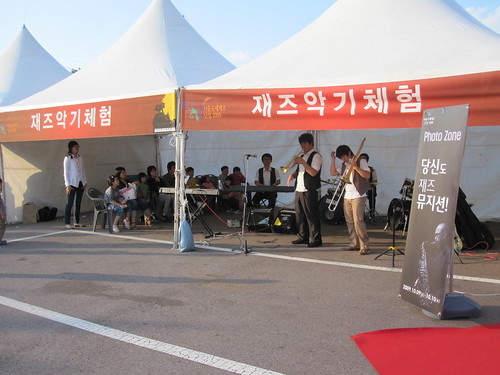 I’ve never been much of a music person. Not that I don’t want to be, it’s just that I’m often more focused on other things. I like techno mostly, but am open to anything that sounds fit for the occasion. What I didn’t know about jazz is that it’s mostly improvised in real time. Call me an uncultured buffoon, but no one ever explained this to me before. But anyhow, according to that definition, jazz is now the only music that I’m able to make. And the only instrument that I play is my Knees (similar to bongo drums). 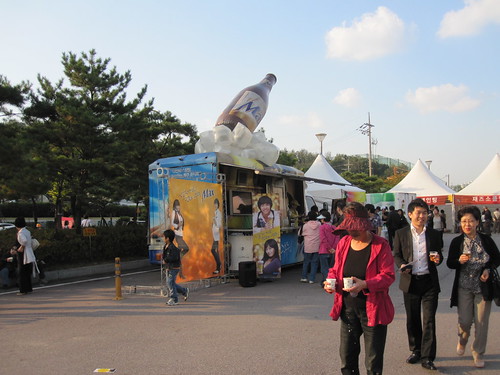 One thing that I still admire about Korea is that alcohol enjoys a more respectable social standing here. While the social elite back home often have to hide their alcoholic urges behind things like wine-tasting tours, Koreans openly encourage drinking questionably large amounts from time to time. At the Jazz Festival, they had a beer and a makkeoli wagon handing out free ‘samples’. But the samples were a full cup, and you could go back and have as many as you want without having to change your hairstyle or otherwise pretend that you were a different person. 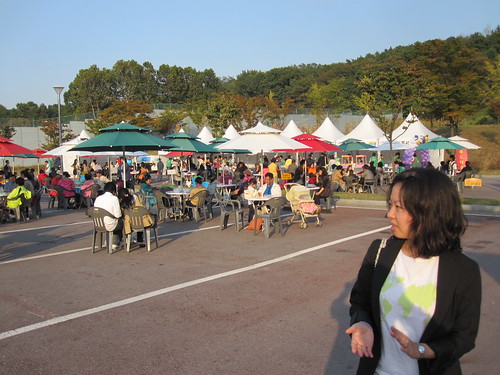 Here’s Heather after three and a half standard drinks. She seems pretty happy these days. 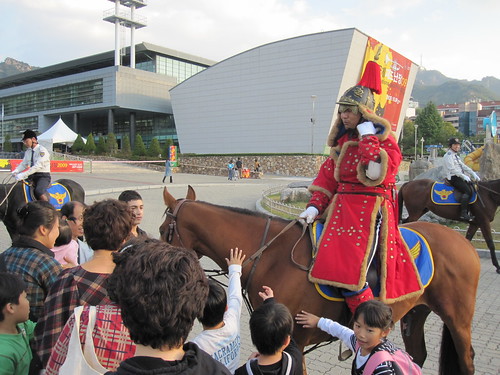 Historically, Koreans were known for their horse-riding and archery skills. I like the idea of riding horses, but the only two times I’ve done it, it has been a less comfortable than expected ordeal. Scooters are faster and more easily stowable, but they don’t run on straw and carrots. 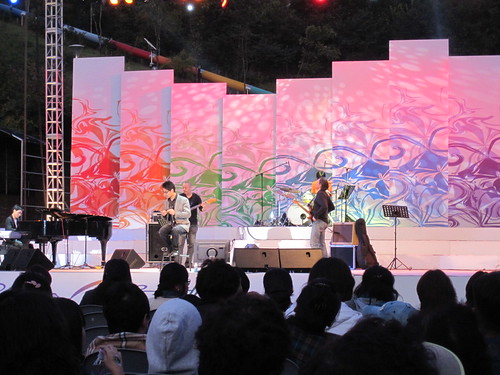 Often when I watch musicians performing like this, I wonder if their behaviour is part of the performance. What I mean by this is that they’ll often appear to be en-tranced in some sort of deep and ethereal connection with the music, oblivious to the conspicuously large crowd that usually isn’t present during rehearsals. I’m not saying that it’s a bad thing, just that I wonder if they feel compelled to look like they’re enjoying it more than they really are. If I were a musician at a big concert, I’d probably be fixated on all the audience members watching me. 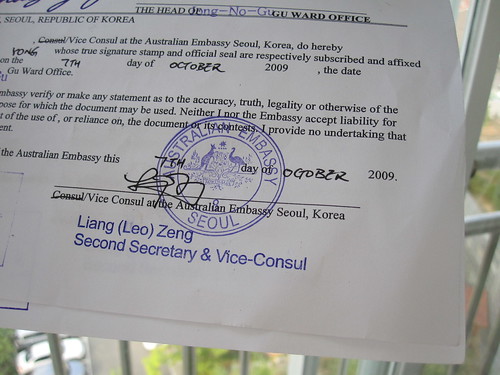 If you’re an Australian marrying a Korean in Korea and you want to make it official, go to the Australian embassy in Jongno-gu. You need a document called a Certificate of No Impediment to Marriage. This certifies that you were not married in Australia and aren’t a wanted criminal. Then you take this document to the nearby Jongno council building (5 minutes walk). They speak English there, but you’ll have to fill out quite a few forms, with a lot of details about your spouse’s family. Then you go back to the embassy again. You need to bring your passports and other identification. If you start around lunch time, about 2 – 3 hours later you’ll be officially married. 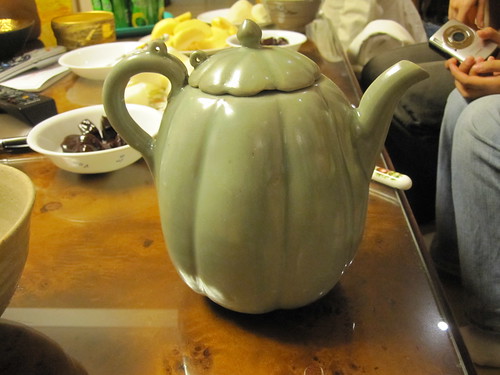 Recently I found out that my professor likes pottery. He has an interesting collection of various relics that he showed us at his house. The one in the photo above is a 900 year old teapot from the Goryeo Dynasty. The main thing that was running through my mind at this point was ‘Do Not Break The Teapot’. 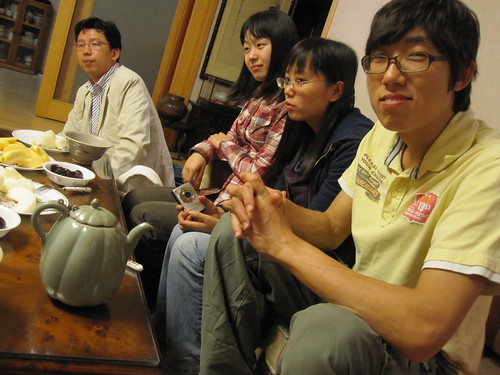 I don’t mind the odd piece of pottery, but like most art in general, I often don’t know what I’m supposed to be looking at when I pick something like this up. But unlike the other lab members, I don’t try and pretend that I do. A funny thing about Korean culture is that you’re often inclined to suppress your actual thoughts and appear to be the opposite of what you’re thinking. 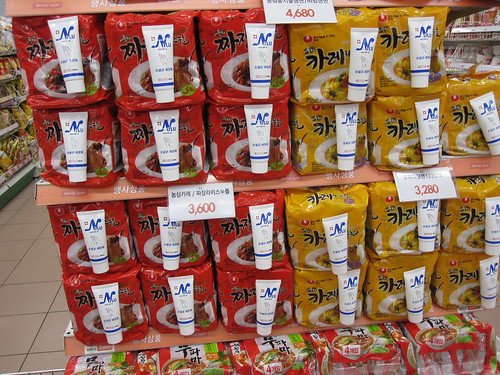 Swine flu has come and gone in Korea. The epidemiologists are saying that the worst of it is over, so like bird flu and SARS, it will go down in history as another Y2K. Which may be a problem, because the next virus might be the big one they’ve been predicting, and I’m starting to get a little desensitized to the fuss. In the photo above is a local ramyeon company’s attempt at cashing in on the swine flu hype. If you buy one pack of noodles, you get some free hand sanitizer. Cunning marketing ploy, or genuine concern? Hmm, perhaps it’s neither.

Anyway, now that I’ve finished the honeymoon blogging, I hope to return to shorter and more digestible posts. This blog is in chronological order most of the time, but the events posted now actually happened 2 months ago. Hopefully we’ll catch up to recent history soon.

Have a good Christmas everyone!