There I was, minding my own business in my 2 X 3 metre koshiwon, when all of a sudden I find out that there’s a vacancy for me at the BK International House. My new residence is located just outside the back gate of the university and I can walk to and from the lab now. Joy.

There I was, minding my own business in my 2 X 3 metre koshiwon, when all of a sudden I find out that there’s a vacancy for me at the BK International House. My new residence is located just outside the back gate of the university and I can walk to and from the lab now. Joy. 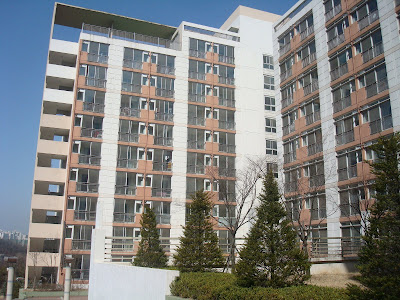 Of all the dormitories available to students at Seoul National University, the BK International House is the most sought after. It has larger living quarters than the regular dorms and the rooms are better equipped. There are also no rules or inspections here which makes me feel more like a grown-up and less like an irresponsible grad student. 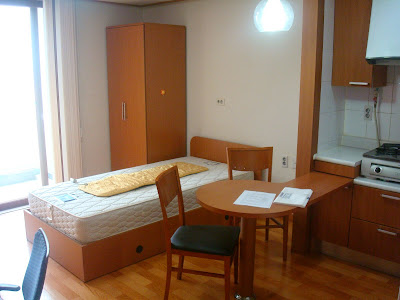 I moved in on a Saturday with the help of Keonwoo and Hong-Sup. Helping someone move house is a debt payable in blood. 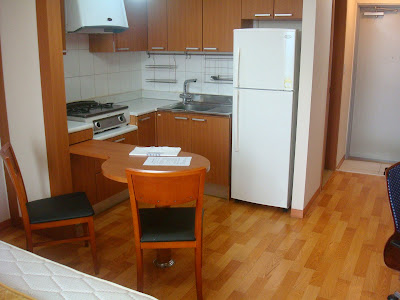 Now that I have a respectable kitchen, I guess I can emerge from my ramyeon binge and start eating fresh foods at home again. I was happy to have a gas range instead of an electric stove top. Gas stoves give you better control over temperature change which is more handy for the kind of dishes that I like to cook. 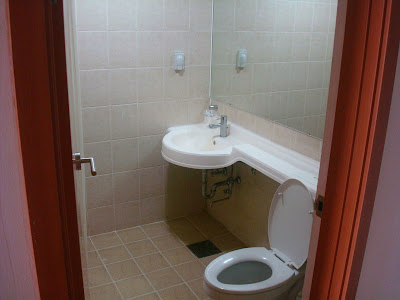 My new bathroom has enough room to swing a cat in. My previous bathroom had barely enough room to dangle a guinea pig in. I guess if you had a really large bathroom you could describe it as being large enough to domesticate a wild elephant in.

Technically, if I really wanted to save time in the mornings, I could probably have a shower at the same time as I’m on the toilet. Interesting thought. 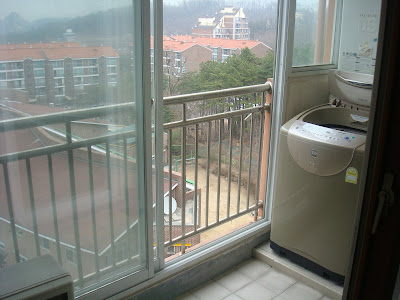 And I also have my own washing machine now, which is much larger than I need. Washing machines in Korea tend to spin dry clothes a little funny, so I’ll usually get my long sleeve shirts out in a tangled mess. Still better than doing it by hand though.
Most machines here also play a little melody when they’ve finished. Mine plays a rather comprehensive, but nameless tune that goes for about a minute. If I had to name the tune, I’d call it “The Simple Joys of 8-bit Music”. I’m sure the machine is dying to express itself in more meaningful ways, but unfortunately the company didn’t endow it with a large enough vocabulary. 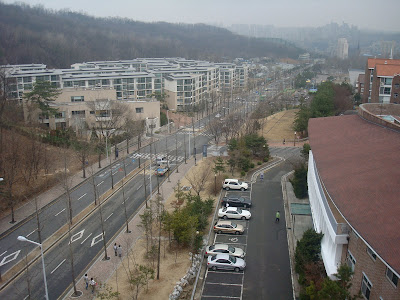 Here’s the view from my balcony. I’m looking forward to the summer, so that I can sit here and ponder the intricacies of molecular biology while sipping on something alcoholic. 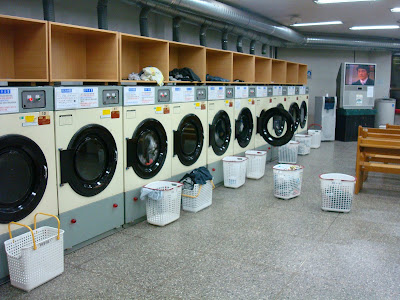 I went for a walk into the nearby dormitories to have a look around. There’s a restaurant, a bar and a convenience store within the buildings. For those who don’t have their own washing machines, there’s this shared facility in the basement.
When I was back in the koshiwon‘s shared laundry, some hapless newcomer to the field of laundrology had added an entire 2 kilogram box of laundry detergent to his wash cycle.

I would have taken a photo for the blog, but I think that would have been a little insensitive to his tattered laundry ego. 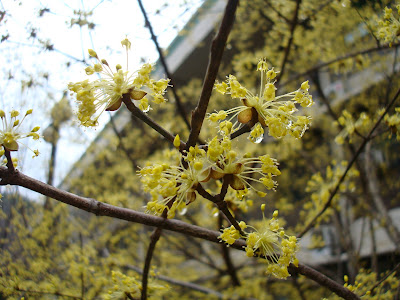 The weather has taken a while to warm up, but finally we’re getting into the low teens (Celsius). I like Korea in the spring because the blossoms here are always nice. 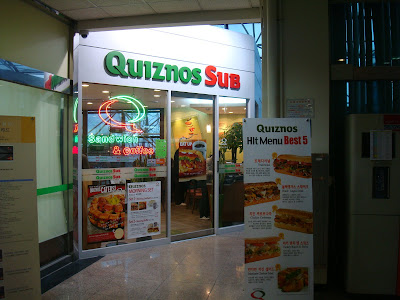 We recently heard a rumour that a Quiznos shop had opened up on campus somewhere. Chen Jing and I went out searching for it on the shuttle bus. Sure enough, one had opened at the top of the hill. 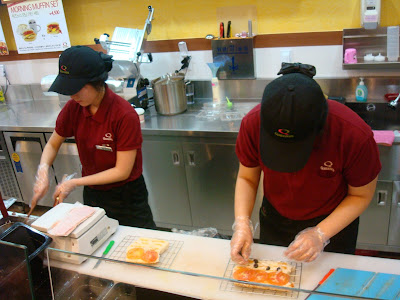 Quiznos is very similar to Subway in Australia and it’s about the only place here that sell proper sandwiches. The common Korean sandwich will often have mashed potato, coleslaw or some other misguided ingredient within. It’s not that I’m complaining about such practices, it’s just that after two and a half years of muted sandwich dismay, a real sandwich is something to get excited about. 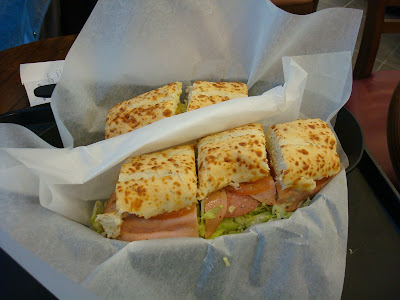 I had the Italian Classic™ on parmesan bread and it was good. It was so good that I bought a Coca Cola™ to go with it, and I rarely drink Coke™. I hope you appreciate my real ™ sign, because I had to do a Google™ search for it just then and it took me a little while to find. That’s the kind of quality effort you can expect here on Lee’s Korea Blog™. 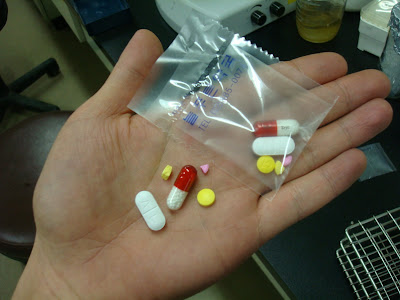 There’s a couple of nasty colds going around Korea at the moment and so it was a bit of a worry when Hong-Sup started sniffling in the lab last week. Before long, he had managed to inoculate most of us with his rather virulent strain of rhinovirus. Contrary to popular belief, very little of the medicines you get from the pharmacy have any effect on ridding the body of the common cold. The reason is because cold viruses mutate rapidly and its difficult to formulate a strategy against something that’s always reinventing itself. Most of the medicines you’ll get are knowingly prescribed as a placebo, or are designed to relieve the symptoms. In Korea, you can get all your little meal doses in specially sealed plastic things, and they look a little bit like lollies.
Incidentally I read about a recent study saying that if you sleep 8 hours or more per night rather than 7, you are three times more resistant to a cold infection. 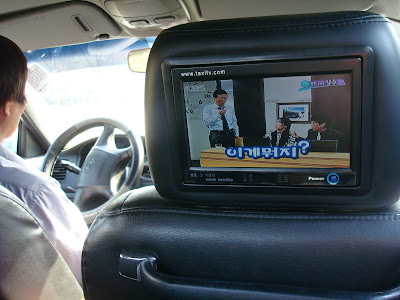 In some of the taxis here now, they’ve installed little televisions on the head rests. This is usually in addition to the dashboard mounted television that will often be playing Korean drama. I think we’ll eventually reach the day when there are more screens on earth than people. 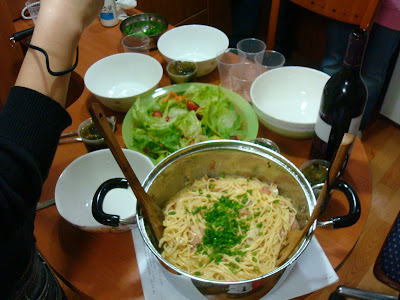 Some of the lab members were interested in learning how to cook, so we got together last weekend and I showed them how to make carbonara spaghetti.
We’ll probably get together every second week from now on and hopefully share some recipes. I was a cook at the Casuarina restaurant for seven years in Australia before I arrived here, but I’ve realised that cooking is a lot like language. If you don’t practice often, it slowly slips away from you. My carbonara was pretty good though. Even Chen Jing liked it, and she doesn’t like cream or cheese. 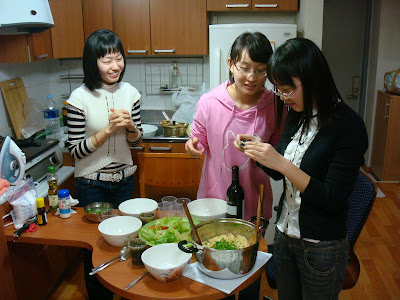 Here’s Eun-Hae, Se-Kyong and Chen-Jing after we had everything ready. It was an enjoyable meal and we drank Australian wine (a Lindemans shiraz) while discussing lab politics. Talking about lab politics means talking about all of the annoying things that ‘certain-others-not-present’ do. And that certain ‘others’ is actually a singular, and the guy’s name is Hoon. 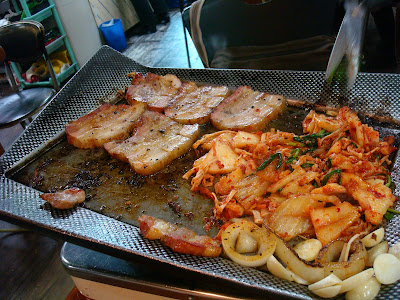 And Keonwoo and I found a pretty good sam-gyeop-sal (barbecue bacon) restaurant near the subway station. It’s probably very unhealthy but it makes up for it with pure sizzling bacon-fat goodness. 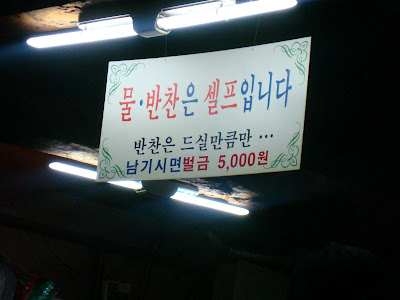 In the same restaurant there’s a self serve banchan (side-dish) bar with the quintessential ‘kim-chi and derivatives’ available. The sign above says that it’s all free, but if you take more than you can eat, you have to pay a fine of 5,000 won. 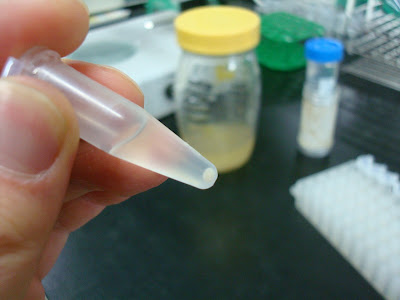 See that circular speck at the bottom of my tube? That’s a colony of Xanthomonas oryzae, which is the name of the bacteria that I’m working on. What our little friend Xanthomonas does is inject rice plants with a cocktail of poisons that make the plant very unhealthy. The plants will often wither up and die, sometimes laying waste to entire fields. It has these tiny little needles that it produces, which are pretty interesting in themselves. But my specific project is focused on how the poisons work once they’re inside the plant.

I have a theory at the moment, but I’ll tell you about it when I’m sure. 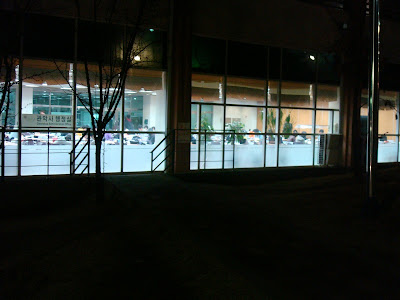 These days I walk home from the lab usually between 11pm and midnight. It’s difficult to see here, but in the windows of the public area of the dormitory, there are always students up studying. Even late on Saturdays and Sundays.
I’ve also settled into a routine of extended work. A conservative estimate of my working hours would be around 80 per week. No kidding. But the style of work in the lab is fairly slow paced, because you’re always waiting for something to finish growing/incubating/amplifying etc. 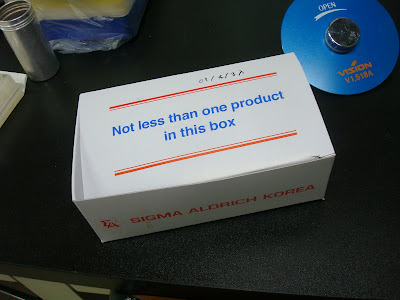 And to finish us off this time is a box sent to us by a lab equipment company. I find the label on the top amusing, but it also leaves me with further questions. Perhaps there may be more than one product in the box, if we’re lucky? Or is it stating something more complex regarding the nature of zero? Is it possible to mail less than one of something? Would it be the same if they added “… but more than zero products in this box” or “3 minus 2 products in this box”?

Such occurences add a light touch of sorely needed drama to my laboratory lifestyle.